Gone are the days when royals could marry a long-lost cousin and call it a day (however, Queen Elizabeth and her husband were married before that custom was put into place). Now, royal options are limited for those who want to keep their lineage regal. Because they can’t date within their inner circles—unless they want to risk a Game of Thrones twist—royals are now meeting commoners in the wild.

The royals below found their significant others in downright normal places, whether at the gym, during college or while dining at a restaurant. Of course, Prince Harry and his bride-to-be Meghan Markle have the most well-known story (they were introduced by a mutual friend), but plenty of royals had equally interesting meet-cutes with their formerly plebian partners.

Sweden’s Princess Sofia is infamous for her wild pre-royal life. Back when she was a commoner (she started dating Prince Carl Philip or PCP, in 2010), she posed semi-nude for a Swedish magazine and competed on a racy reality TV show called Paradise Hotel. The pair announced their engagement in 2014 and were married on June 13, 2015, in Stockholm. Since then, there’s been no thirst trapping pictures or reality TV forays. She recently gave birth to her second child, documenting the announcement on Instagram like every good modern royal should.

Prince Carl Philip isn’t the only Swedish royal whose significant other doesn’t have a regal lineage. His sister, Crown Princess Victoria, met her husband at the gym. Now known as Prince Daniel, he was her personal trainer way back in 2002. They were married in 2010 at the Royal Palace in Stockholm, Sweden, and now have two children.

Sweden’s Princess Madeleine not only married a commoner, she wed one who declined Swedish citizenship so he could continue working in finance. She met Christopher O’Neill who has no title, in Manhattan, where she was working for her mother’s nonprofit, World Childhood Foundation. They were married at the palace in Stockholm in 2013. The couple currently lives in London with their three children, who could potentially lose their titles if they don’t return to Sweden sometime soon.

Before Mette-Marit Tjessem Hoiby married Norway’s Crown Prince Haakon in 2001, she was a notorious party girl. The couple met at a music festival and started dating a few years later. Before she became royal, she was an occasional waitress who frequented raves and had a son with a man who convicted of drunk driving and cocaine possession…so it wasn’t exactly the typical royal pedigree. She apologized for her previous wild ways and lately has been busy crusading for women’s rights around the world.

Former reporter Beatrice Borromeo married Pierre Casiraghi, who’s seventh in line to the Monaguesque throne (his mother is Princess Caroline, his grandmother is Princess Grace Kelly), in August 2015. Now, the couple is being compared to Prince Harry and Meghan Markle, although the Monaco royal is currently pregnant with her second child.

Queen Letizia was an unexpected addition to the royal family, as she was the first Spanish queen to be born a commoner. She was formerly a journalist, just like Monaco’s Borromeo. She was covering an oil spill in 2002 when she met Prince Felipe. And like Markle and Hoiby, she was divorced. When she and King Felipe VI announced their engagement after just a year of dating, it shocked folks—perhaps that’s one of the reasons she’s currently embroiled in an epic feud with her mother-in-law.

The eternally chic Queen Rania met the eldest son of Jordan’s King Hussein in 1993, becoming the world’s youngest Queen in 1999, at the age of 28. Back in her commoner days, she worked in marketing for Citibank and Apple. After meeting King Abdullah II at a dinner party in 1992, they got engaged only a few months later. She became Queen of Jordan when her husband ascended to the throne in 1999. She and her husband have four children. Her daughter, Princess Iman bint Abdullah, is currently a Georgetown student and is definitely a young royal to know.

Denmark’s Crown Prince Frederik met his wife at the 2000 Sydney Olympics. Back then, the Australian ad exec was known as Mary Donaldson. The couple met at a restaurant in Sydney, talked all night and in a Hallmark Channel movie twist, the future King simply introduced himself as “Fred,” so she didn’t know he was the prince of Denmark (guess he’s no Hamlet). After the prince’s mother, Queen Margrethe, acknowledged the relationship in 2003, they were engaged six months later. They wed in 2004 in Copenhagen, but only after Princess Mary learned Danish, converted to the Lutheran Church and gave up her Aussie citizenship forever. Now they have four children and make sure to re-visit the Olympics to remember their romance.

Kate Middleton was once the most famous commoner to marry into the royal family—before Markle, that is. Before the Duchess of Cambridge was the model of royal behavior she was plain old “Waity Katie,” dubbed so because they were together for seven years before their engagement. The couple met at college at the University of St Andrews in Scotland, when they lived in the same freshman dorm. They finally got married in 2011, with a casual 1,900 guests in attendance.

Alas, the ultimate commoner fairy tale stars Meghan Markle in her best role yet, as she’s set to wed Prince Harry on May 19. They were introduced by a mutual friend who set them up on a blind date and promptly fell in love at hyperspeed. They announced their engagement on November 27, 2017, and since then, the countdown for their epic nuptials has been on. 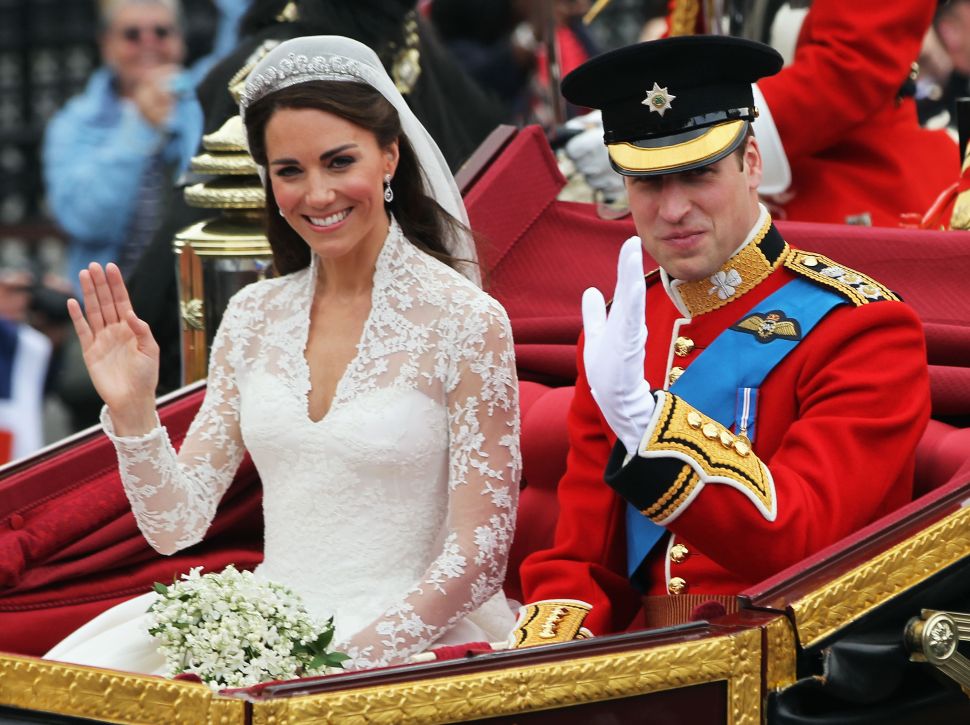