The footage of the aftermath of the chemical attack in Syria, filmed by the White Helmet organization, made headlines around the world and provided reason for President Donald Trump’s “nice and new and smart” missile launches against Syrian President Bashar-al-Assad’s regime on Friday, April 13.

Upon watching the video, Russian Foreign Minister Sergei Lavrov admitted he felt like he was in the shoes of Konstantin Stanislavski, a renowned Russian theater director, because he wanted to yell Stanislavski’s famous phrase, “I do not believe!”

“It’s disgusting when kids are used to stage such dirty tricks,” was Lavrov’s immediate reaction.

Two days after the chemical strike, Russian-backed Syrian forces took control of the site of the attack, and now the Russian Ministry of Defense is claiming there is proof that it was a “planned provocation.”

Russians say they found no dead bodies with signs of chemical poisoning and that the facilities bombed by the U.S. and its allies were not storing chemical agents but rather they were research centers for cancer drugs and snake bite antidotes.

The Russians are also saying that they know who is behind the lie that Syria used chemical weapons against its citizens.

The more than a century old Russian political proverb, “Anglichanka gadit”—which means “It is Englishwoman who craps”—is alive and well today in Russia.

From Russia’s perspective, the list of “Englishwoman’s crap” is very long indeed.

Examples include sucking Russia into World War I while secretly supporting the Bolshevik revolution, approving the Russian tsar’s murder by Bolsheviks while supplying weapons to anti-Bolshevik forces, appeasing Hitler and pushing him to war against the Soviet Union, and later kicking off the Cold War with Churchill’s famous Fulton speech.

More recent examples include the poisoning of Alexander Litvinenko and the Skripals and the mysterious suicide of the Russian oligarch Boris Berezovsky in London.

During a briefing, Russian Major General Igor Konashenkov, the official representative of the Russian Ministry of Defense, said: “We reliably know that from April 3 to 6 the representatives of the so-called ‘White Helmets’ received powerful pressure from London for the speedy implementation of the prepared provocation.”

“Its purpose today is clear to everyone—to provoke the United States to launch missile strikes against Syria,” he continued.

He then showed the now famous video of the gas attack.

“While the first medical aid was given to them, unknown people ran into the hospital. Some of them had video cameras,” he said. “These people began to yell, cause panic and spray everyone with from hoses, shouting that everyone in the room had been exposed to poisonous substances. The patients that were in the emergency room and their relatives, in panic, started to pour on each other. After they filmed all of this, the unknown people quickly disappeared.”

He added that the participants in the video aren’t hiding their names and are ready to give their account of the event to the world.

Indeed, the Syrian doctors in the video spoke to Russian representatives.

In the interviews, which were televised in Russia, one of them said, “On Sunday, April 8, one of the buildings was bombed. The top floors of the building were destroyed. The ambulance brought the injured from the top floors. On the ground floor, a fire started. Both the ground floor and the basement were filled with heavy smoke. People were brought into the ER. We started to treat those that had suffered. We were filmed, and then a man came who started to yell that it had been chemical poisoning. This man, a stranger, was saying that people had suffered from chemical weapons. People became frightened and started to pour on one another and use inhalators. The doctors of the hospital were saying to us that there was no chemical poisoning.”

“My name is Khalil Ajij. I am a medical student,” said the other man in the video. “I work at the central hospital of Douma in the emergency room. On April 8, one of the buildings was bombed in the city. Top floors of the building were bombed, and a fire started on the lower floors. All the victims from that building were brought to us. The inhabitants of the upper floors had signs of suffocation from the smoke of the fire. We were treating them in accordance with their symptoms. While we were treating them, a stranger I did not know came in. He said it was an attack using a poisonous substance. People got frightened, there was a struggle, and the relatives of the wounded started to pour  on each other. Other people that did not have medical experience started to use inhalators with anti-asthma medicine on children. We did not see any patient with signs of poisoning by chemical agents.”

In the video of the hospital, there was a boy who was obviously shocked and traumatized. Russians found and interviewed him.

Eleven-year-old Khasan Diab looks very healthy now and, with his father by his side, he told his story: “Yes, I was in a video. They came to the basement and began to tell us to go upstairs with them. Then they took us to the hospital, and then they started watering me. I was with my mother and my sister. We felt good, we did not give anything.”

Omar Diab, his father, also spoke of the event.

“The rebels held me a prisoner. Together with my friends, we were digging trenches by the city stadium,” he explained. “When I was told that my neighborhood was hit, I asked permission to leave work for half an hour to check if my family was safe. I came to my neighborhood but did not find anybody. I lit a cigarette, looked over the place that was hit by the bomb, and came to the entry into the tunnel. There was a lot of there. I met children there, and we greeted each other. They asked me how I was, and we smiled at each other. I went into the lobby of the hospital. There were my wife and my kids. I asked them what they were doing there, and they answered, ‘Just waiting.’ They were given some jam and cookies. I was late for the shooting of the video.”

Diab told another reporter, “There were no chemical weapons used. I smoked a cigarette outside and did not smell anything. I went into the hospital and saw my family. The rebels gave dates, cookies and rice for taking part in the shooting of the video and let everyone go home.”

The water from the hose was cold, little Khasan recalled. Strangers were pouring it on him for about 10 minutes. It was not pleasant experience.

Diab told RIA Novosti, a Russian news organization, “My son had no signs of suffering from chemical weapons whatsoever. He was a little bit scared but healthy. My family and I are ready to testify about this in any place in the world, in Geneva, in New York, that there was no use of chemical weapons.”

Russian reporter Evgeny Poddubny reported from the hospital room where the famous video of chemical attack aftermath was shot the day after Assad’s troops captured the city. He wasn’t wearing a gas mask or anti-chemical protection gear. There were other people in the room with him, all of whom also weren’t wearing protective gear.

Russia’s representative at the Organization for the Prohibition of Chemical Weapons (OPCW), Alexander Shoulgin, stated that Moscow blamed London for staging the chemical attack in Douma and has not ruled out that Washington participated in the “planned provocation.”

He said, “…We have incontrovertible evidence that there was no incident on April 7 in Douma and that all this was a planned provocation by the British intelligence services, possibly with the participation of their senior allies from Washington in order to mislead the world community and justify aggression against Syria.”

The U.S. is not believing the Russians. The same day Major General Konashenkov accused British intelligence of staging a fake chemical attack in Douma, the U.S. Ambassador to the United Nations, Nikki Haley, refuted Russia’s claims, saying, “We know who did this. Our allies know who did this. Russia can complain all it wants about fake news, but no one is buying its lies and its cover-ups.”

State Department spokesperson Heather Nauert told reporters on April 19, “We have credible information that indicates that Russian officials are working with the Syrian regime to deny and to delay these inspectors [from OPCW] from gaining access to Douma. Russian officials have worked with the Syrian regime to sanitize the locations of the suspected attacks and remove incriminating evidence of chemical weapons use.”

“People on the ground have been pressured by both Russia and Syria to try to change their stories,” she added, obviously hinting at little Khasan’s and his father’s stories.

Russian Ministry for Foreign Affairs spokesperson Maria Zakharova is challenging the U.S. to allow 11-year-old Khasan and his parents entry to the United States so they can give a speech at the United Nations in New York.

She said, “…Khasan’s family [members] are ready to give their testimony to any international organization with regards to what happened in Douma. Do you think that if Khasan’s family wanted to go to the United States of America, directly to New York, they would be able to obtain a U.S. visa? I really hope this question will not become a rhetorical one.”

Lavrov said he would lobby the Syrian government to let Khasan and his father go to New York.

On Saturday, the OPCW inspectors were finally able to visit the place of the alleged chemical attack in Douma.

If the U.S. doesn’t grant little Khasan a visa, Russia intends to end the “Englishwoman’s crap” by sending the boy to Hague to testify in front of the OPCW. 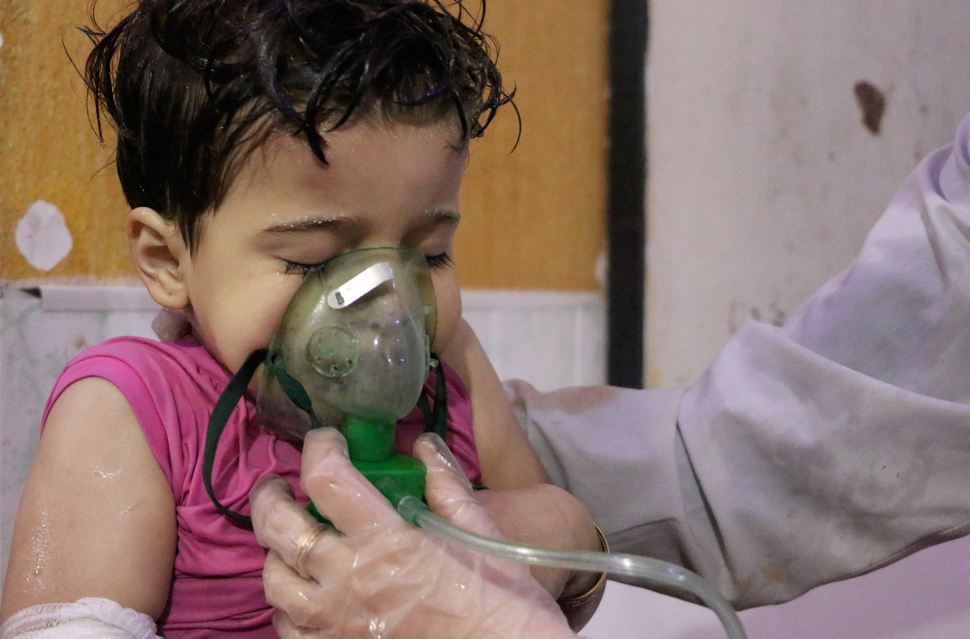