Salesforce CEO Marc Benioff didn’t believe that his company, which was named “the best place to work at” by Fortune, paid women employees less than men for the same job—until he was proven wrong by hard data.

“You know, it’s—it’s not possible,” Benioff recalled his reaction when his chief people officer suggested to him in 2015 that Salesforce might have a gender pay gap.

“It’s impossible because we have a great culture here,” he told CBS 60 Minutes host Lesley Stahl on Sunday. “And we don’t do that kind of thing. We don’t play shenanigans paying people—paying people unequally. It’s unheard of. It’s crazy.”

Then, in 2016, the company performed a first-time analysis of the salaries of 17,000 employees globally. A gender pay gap did exist, the audit found.

“[The pay gap was] just everywhere. It was through the whole company, every division, every department, every geography,” Benioff said.

The findings were strange because Salesforce has explicit policies that say men and women should be paid equally.

Cindy Robbins, Salesforce’s chief people officer, observed that a pay gap tends to show—and amplify over time—as men and women climb up career ladders, even if they were offered the same rate when they were hired.

“You know, there were times in my career where I said, ‘I don’t know if this is the right pay.’ And I kind of thought, ‘Well, if I say something, it’s gonna go up the chain.’ And do I wanna be viewed as the complainer? Right?” Robbins told Stahl.

Robbins’ concern explains why women are often reluctant to ask for a raise.

An October 2017 study by McKinsey & Co. found that women who ask for a promotion or a raise are more likely than those who don’t to be perceived as bossy, intimidating and aggressive by coworkers.

Following the 2016 audit, Salesforce spent $3 million in salary adjustment to close the pay gap. About six percent of the company’s 30,000 employees received a raise as a result. However, the fix seemed fleeting. A year later, Salesforce identified 11 percent of employees who were underpaid in a new audit and spent another $3 million to fill the gap.

“We did it the first time. We were so happy with ourselves. It was great. Then, all of a sudden, we kind of did our audit again and the same thing happened again,” Benioff recalled.

That brought him to realize a problem that’s easily overlooked by CEOs of fast-growing tech companies.

“We’re, like, ‘How can this be?’ But it turned out we had bought about two dozen companies. And guess what? When you buy a company, you just don’t buy its technology, you don’t buy its culture, you also buy its pay practices,” he explained.

That shows the widespread nature of pay disparity across the tech industry.

Recent surveys have shown that women in tech earn anywhere between five to 25 percent less then their male counterparts. In the meantime, despite heated discussions around the issue, most CEOs refuse to recognize pay gaps at their own companies, Benioff said.

To minimize the impact of poor pay practices of newly acquired companies on Salesforce, as well as unintended pay gaps within the company, Benioff said more frequent salary audit would be needed.

“I mean there is a lot of resistance. But this—there’s never been an easier time to make this change. CEOs with one button on one computer can pay every man and every woman equally. We have the data. We know what everyone makes. There’s no excuse. Everybody can easily do this now.” he added.

“The need for another adjustment underscores the nature of pay equity—it is a moving target, especially for growing companies in competitive industries. It must be consistently monitored and addressed,” Robbins wrote in a company blog post in April 2017, following the second salary audit. 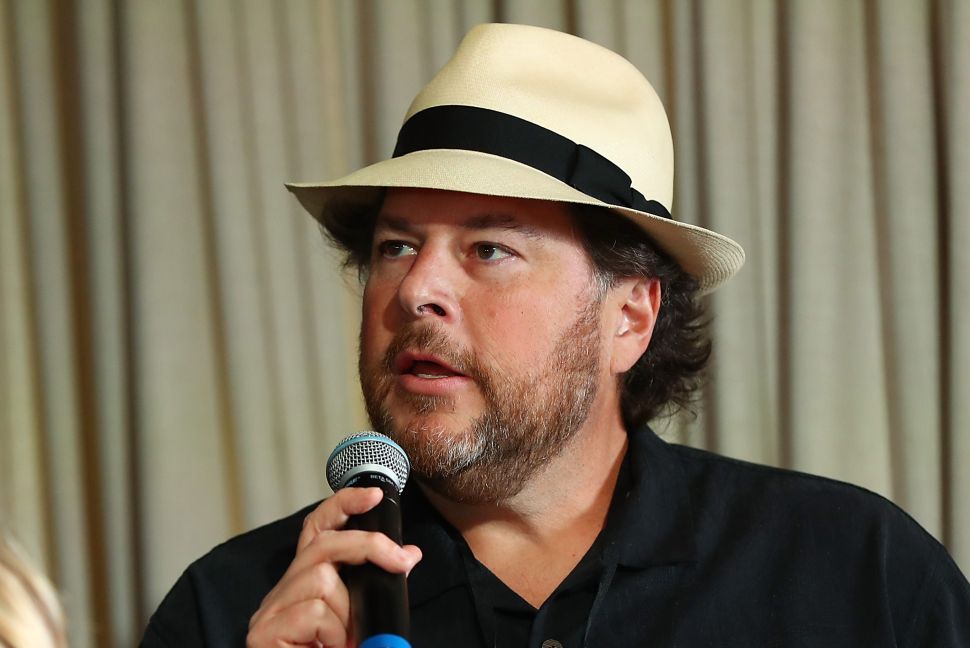