The trees are budding, the grass is turning green, daffodils and pansies are emerging from hibernation. Spring is here, which means auction houses are readying for some of their biggest events of the year: the Impressionist, modern and contemporary art sales in New York City.

Hogging much of the attention of what may prove to be a billion-dollar season at both Christie’s and Sotheby’s is a 1917 painted nude by Amedeo Modigliani that has been estimated at $150 million. It’s the highest estimate for any work of art at auction, ever (though not the highest figure a work of art has sold for at auction—that goes to Leonardo Da Vinci’s Salvator Mundi, which fetched $450 million at Christie’s last year) and it hits the block on May 14 at Sotheby’s Impressionist and Modern auction.

Though not confirmed by the house, it’s widely known that the painting is being sold by John Magnier, 70, an Irish venture capitalist and owner of the Tipperary-based thoroughbred stud farm, Coolmore Stud, who purchased the painting for $26.9 million at a Christie’s auction in 2003. If it meets its high mark, the painting will have turned quite the profit for the Irish business magnate. Prior to that, the painting, titled Nu Couche (sur le cote gauche), had belonged to Las Vegas casino owner Steve Wynn.

Both are widely considered savvy art investors. Wynn’s tastes, based on his record-setting auction purchases, range from Old Masters (Vermeer and Rembrandt) to Modern (Monet and Picasso) and contemporary (Jeff Koons). In 2012, Wynn purchased Koon’s sculptural “Tulips” for $33.6 million at Christie’s and, two years later, outbid all others for the artist’s “Popeye” for $28 million at Sotheby’s. In 2004, after he bought the Modigliani, ARTnews listed John Magnier as one of its top 10 collectors in the world, noting his interest in equestrian art and works by British artists, such as Sir Joshua Reynolds.

Why Is Modigliani’s Nu Couche Expected to Sell for So Much?

A $150 million price would not be the highest public sale price for a Modigliani—$170.4 million was paid at Christie’s in 2015 for another seated nude from the same 1917-18 series created by the artist. But it would far exceed the next highest amounts achieved for works by Modigliani: a 28-inch high carved stone head that fetched $70.725 million at Sotheby’s in 2014 and a 1917 seated nude that sold for $68.96 million for Sotheby’s in 2010. Whatever the eventual sales price, this nude is guaranteed to sell, as Sotheby’s already has a client who has placed an irrevocable bid.

The Modigliani will not be the only major work up for sale at Sotheby’s that evening, but it will be the most expensive. A 1932 Picasso oil, Le Repos, also will also go on the block with a $25-35 million estimate, as well as an 1896 Claude Monet painting, Matinee sur la Seine (estimate $18-25 million) and a 1955 Alberto Giacometti bronze sculpture, Le Chat (estimate $20-30 million).

Helena Newman, global co-head of Sotheby’s Impressionist & Modern Art Department, noted that Nu Couche (sur le cote gauche) is an important work by an artist whose appeal and importance “is recognized around the world. People in Asia are as interested in his work as those in Europe and North America, which cannot be said about most artists.” The painting itself, she claimed, is “one of Modigliani’s most iconic, most stunning works.” The painting, whose reclining figure “has a sensuous, alluring posture, looks back at the classical traditions of the nude in a very different way” than in the treatment of similar subjects by other artists.

She added that Modigliani “captured the public’s imagination” through the “visual appeal of his art and the short-lived drama of his life.”

Who Is Amedeo Modigliani?

Amedeo Modigliani (1884-1920) was highly regarded by other artists in his time but far less so by the public. Few of his signature elongated figurative works found buyers, and he died destitute. However, the reputation of this Italian-born Jewish artist who spent the last 14 years of his life in Paris began to soar within a few years of his death at age 35 from tubercular meningitis. Shortly after his death, his grief-stricken pregnant live-in girl friend threw herself out a five-story window to her death.

The reclining (female) nude was a favored subject by the artist, who created 22 works on this theme between the years 1916 and 1919. (At the first showing of these paintings in Paris in 1917—the artist’s only career solo exhibition—traffic was backed up around the gallery, causing the police to close the exhibit. However, it reopened the next day.) As opposed to the $170.4 million nude, which displayed a full-frontal model laying on her back, Nu Couche (sur le cote gauche) is a bit less revealing, showing the woman’s back and rear while the model turns her head in the viewer’s direction.

What distinguishes Modigliani’s nudes from those of many of his predecessors is the boldness of the model’s expression—she shows no sense of embarrassment or gives the impression that she is unaware of the viewer. Also notable about this particular artwork is that, at 58 inches across, it is the largest known painting by the artist. Within this series, it is the only one of his horizontal nudes to contain the entire figure within the canvas.

What Else Do I Need to Know About Modigliani’s Nu Couche?

Most of these paintings are now in permanent collections in museums, including New York’s Guggenheim, Metropolitan Museum of Art and the Museum of Modern Art, each of which has three works from this series. Only nine of the remaining paintings are in private hands, which has added to the excitement around this particular sale. This particular painting was the cover image on the catalogue of a Modigliani retrospective at London’s Tate Modern that ended on April 2. Another recent exhibition of the artist’s drawings, “Modigliani Unmasked” at New York’s Jewish Museum, concluded an almost five-month run in early February.

Success has its dark side, however, as the unique style of Modigliani has become an area of rampant fakes and forgeries. The problem was not helped by the artist himself, who gave away unsigned drawings to friends, leading to questions of authenticity and provenance even with his actual work.

“The Jewish Museum’s show made a strong case for the artist, how capably he moves between media—painting, sculpture, drawing—and how exotic his work can seem,” said Noam M. Elcott, an associate professor of modern art at Columbia University. “He is not quite western, he is a little foreign, which adds to his particular appeal.”

Esteem, yes. Sky-high prices…well that may not strike everyone as warranted. In Elcott’s mind, “there is no historical justification for any painting costing over $100 million.” Tell that to the collectors. 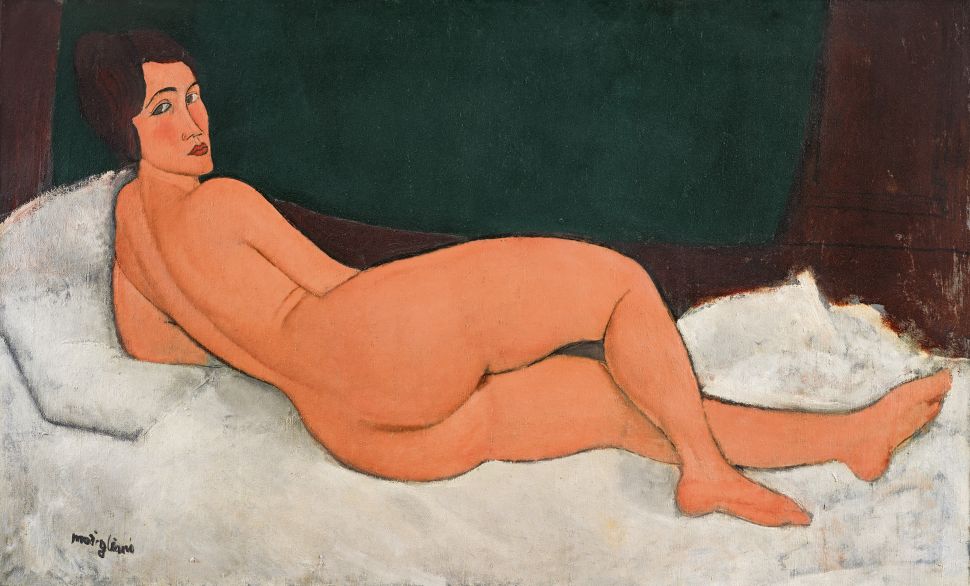