Scientists at NASA and MIT have joined forces to amplify the search to answer one of humanity’s most perplexing questions: Are we alone in the universe or are there other forms of life out there? To find out, researchers built a satellite called TESS to make long, sweeping scans of space in search of objects that could harbor life.

“Humans have wondered forever whether we’re alone in the universe, and until 25 years ago, the only planets we knew about were the eight in our solar system. But since then, we’ve found thousands of planets orbiting other stars. We think that all the stars must have their own family of planets,” said Paul Hertz, director of the Astrophysics division at NASA Headquarters.

Scientists have used their knowledge of what life requires to exist on Earth to narrow down a few fundamental building blocks necessary for it to arise on planets outside of our solar system, called exoplanets. A planet’s size, what it’s made of, and how far away it is from its host star largely determine if a planet is able to manifest life. Said Hertz, “The planets that we are going to be most interested in looking for habitability are those that are rocky, and those that are the right temperature.”

TESS, or Transiting Exoplanet Survey Satellite, is designed to detect small planets orbiting bright host stars by measuring small dips in light, which occur when planets pass in front of a star. If such a dip is detected, scientists can then ascertain if the planet warrants further study by telescopes and other instruments that are able to measure the change in light in more precise detail. TESS will ultimately make the search for life much easier by cutting down the long list of stars to those only deserving of additional examination. After a long queue of over 200,000 individual stars and their accompanying planets are examined, the most favorable candidates will be targeted by telescopes around the world and in space.

The information gathered by TESS will provide observatories with a treasure map of new planets to study on their own time, with their own budgets. NASA and MIT are encouraging the public to get engaged and examine the data provided by the mission. “I think public interest will catch on like wildfire. The idea of finding other things on other planets sparks things in people,” Robert Lockwood, TESS spacecraft manager at Orbital ATK, told Observer.

TESS will track more than two times the amount of planets discovered by its predecessor, Kepler, dramatically increasing planets available for study. Whereas Kepler could only study small, specific areas, TESS, which is equipped with four cameras, will eventually survey over 85 percent of the night sky.

“When you look at what Kepler found, no one assumed there might be a planet made entirely of diamond, or that there could be worlds all covered in … What we will find with TESS is going to be solar systems that you never imagined possible before,” TESS Project Manager Jeff Volosin told Observer.

Once every 13.7 days, when the satellite is closest to Earth in its orbit, scientists will download the data it has gathered, and that data will be released to the public four months later. Overall, the mission will last three years and cost $337 million, which includes a team of up to 100 collaborators working directly on the project. TESS is budgeted for one year of ground work and two years in space, though its mission life can be extended up to nearly two decades, which would greatly increase the amount of data gained from the mission.

TESS took flight from the Cape Canaveral Air Force Station in Florida at 6:51PM EDT on Wednesday aboard a SpaceX Falcon 9 rocket. The launch, SpaceX’s eighth of the year, signals an increasingly healthy relationship between NASA and SpaceX. And since SpaceX has expressed a desire to launch missions beyond our solar system in the future, the company may use the data collected by TESS to figure out which distant star is worthy of a visit. Said SpaceX VP of Build and Flight Reliability Hans Koenigsmann, “TESS is special in relevance for SpaceX in the sense that we want for humanity to become a multiplanetary species… It’s super exciting that we are looking for planets in other systems and to try to figure out where humanity might one day go.”

Moments after takeoff, the Falcon 9 rocket landed as planned on a mobile landing platform in the Atlantic Ocean called “Of Course I Still Love You.” The landing—a feat considered impossible until SpaceX proved it feasible three years ago—is the launch provider’s 24th. 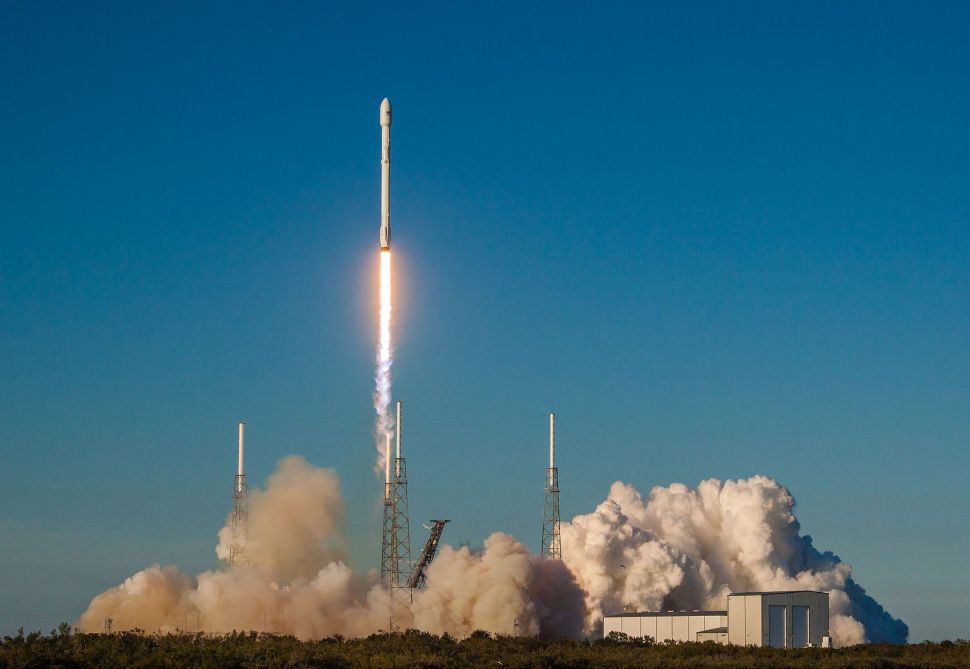