It’s become an eerily familiar story: Previously untouchable, controversial, antagonistic media figure, is suddenly on the wrong side of a lawsuit. The legal arguments are either technical and arcane or simply unexpected. Press coverage is intense and bad publicity follows. The lawsuit seems like a longshot at first, and then it starts to look more serious as it survives motion after motion.

Questions naturally ensue: Is there something more to the story? Could this really be the thing they go down for? And more pressingly, who is behind this?

Stormy Daniels and Donald Trump. Alex Jones and the Sandy Hook parents. James O’Keefe’s Project Veritas and Democracy Partners. Karen McDougal and Donald Trump. James O’Keefe and the president of United Teachers of Wichita. Each legal situation is different—in one case, it’s a defamation claim, in another, it’s breaking local and federal wiretap laws, and in another, it’s a coverup of an affair that may have violated campaign finance laws.

So what do all these cases have in common? They follow a playbook created by the billionaire Peter Thiel to destroy Gawker.com. The word for it is lawfare—warfare via the legal system.

It’s simply a conspiracy theory that there is a secret backer behind these other cases, whereas we know for a fact that Thiel was secretly behind a nearly decade-long conspiracy to destroy Gawker via a lawsuit on behalf of the wrestler Hulk Hogan. Yet when I asked an operative involved in Thiel’s conspiracy this week if they suspected that a donor (or donors) might be supporting Stormy Daniels, the answer was “Absolutely.” (To be clear, her lawyer has denied she has any backers besides a crowdfunding campaign). In fact, Thiel’s team marvelled at just how expertly the case had been maneuvered—a somewhat ironic view given that Thiel is a prominent Trump backer and adviser. Backers or not, the aim of the actions against Trump and O’Keefe and Jones seem to be the same: to use the legal system to take someone down after all other options have failed.

Depending on your politics, that’s a good thing or a bad thing. Either way, what we’re witnessing is the weaponization of the legal system in a larger cultural war.

For those not familiar with Thiel’s conspiratorial lawfare, let’s briefly review. After a Gawker website sneeringly outed him as gay in 2007, Thiel was left with little in the way of traditional recourse. Outing someone is gross, not illegal. But Thiel’s theory was that if Gawker flouts most journalistic conventions, and is as bad as he thinks they are, the company probably also flouted various laws in various jurisdictions, and so he hires a secret legal team to explore this claim. Over the next five years, he attacks Gawker by proxy over everything he can think of, from civil violations pertaining to employment law, to copyright violations, intentional infliction of emotional distress, privacy violations and libel. To Gawker, and to observers at the time, none of these cases seemed significantly viable or connected, but with Thiel’s pressure, backing expert legal firepower—and many unforced errors by his arrogant and unsuspecting opponent—he ultimately won a landmark $140 million dollar verdict against Gawker which forces them into bankruptcy.

As I wrote in Conspiracy, though the word “conspiracy” has generally negative connotations, as a methodology, conspiring is amorally neutral. The same goes for lawfare. What matters is the end to which they are applied. So while many were appalled to discover that Thiel spent some $10 million successfully soliciting, funding and advising on a lawsuit to destroy what he believed was a rogue cultural bully, those very same people might cheer a similar effort to take down an online extremist (like Alex Jones) who attacks the victims of school shootings.

Sitting here today, I notice a surprising amount of similarities between Thiel v. Gawker and Daniels v. Trump and Cohen (besides the fact that Keith M. Davidson represented the leakers of the Hogan tape as I reported previously as well as Stormy Daniels, and that now Charles Harder, Thiel’s co-conspirator, is on Trump’s defense team). The real similarities are that, like Gawker, Donald Trump has long seemed to be untouchable, both legally and critically. Second, the legal rumblings of Stormy Daniels were mostly laughed off when they first began. Few took a $100 million lawsuit from Hulk Hogan seriously, least of all Gawker, just as Michael Cohen and Donald Trump did not initially believe they had much to fear from a pornstar besides some embarrassing press before the election. If they were afraid they would not have made so many stupid, contradictory and self-incriminating on-the-record statements about the case (also a Gawker parallel). More importantly, although the original claims might not have seemed serious, things get real when discovery happens. Thiel’s lawsuits against Gawker were the first in the company’s history to get well into the discovery and deposition phase (in which many damning, private conversations were discovered). The Stormy Daniels case takes this to an entirely new level with the Justice Department actually raiding the offices of Trump’s lawyer and uncovering what may turn out to be the nails that seal his (and his lawyer’s) coffin.

Moreover, Daniels’ lawyer Michael Avenatti seems to have realized something Thiel realized early on in his conspiracy: The reason his opponent gets away with so much is that few have the courage, stamina and resources to actually take their challenge the full distance. Avenatti has called himself a “street fighter with an Ivy League degree,” and that seems to be the difference between him and many of the people who have gone up against Trump in court before. Avenatti isn’t looking for a settlement or a token victory, he wants to destroy Donald Trump and Michael Cohen. Stormy Daniels herself seemed to have originally been happy to keep silent, but when Trump and his surrogates questioned her honesty about the affair, it made things personal.

This was Thiel’s insight against Gawker too. What if someone didn’t quit, what if they took settlement off the table? What if they didn’t “conk out,” to use Thiel’s term, and stuck with it all the way to the end? And what if they weren’t afraid to lose this one case either—that it was a battle in a larger war of attrition?

It was not until 2016, one week into the trial which would end in Gawker’s demise, that any media outlet began to speculate whether someone was paying Hogan’s legal bills, or that it was part of a larger strategy to take the site down. Today, we’re a little wiser, perhaps a little less naive than we were back then. Plenty of outlets have speculated about it, and we happen to know for a fact who one of Daniels’ backers is—the public. (She has so far raised over $350,000 from close to 11,000 people via a crowdfunding site). Perhaps the writing is on the wall for Trump as it was for Gawker. Perhaps soon enough Trump will realize, as they did, that if this particular case isn’t the one that sticks, soon enough one will. If Thiel’s playbook holds, and its users are determined enough, it is simply matter of time.

And what of Alex Jones? Defamation cases are extraordinarily hard to win, and usually not the kind of cases lawyers take on contingency. But were someone to have the resources and wherewithal to pursue the case fully—not something one would expect of grieving parents—it would send a strong message to Jones. The fallout from an even halfway successful claim would make Jones further toxic to the advertisers and platforms his business needs to reach its audience. Is there enough evidence to conclude there is a conspiracy against this conspiracy theorist? I wouldn’t bet my life on it, but I’d say it’s a lot more likely than the many foolish theories that Jones peddles to his enormous audience.

The same goes for James O’Keefe. Just as it could easily go for Antifa activists if a backer wished to shut down that group, or hold them accountable for their controversial methods. Just as it could go for you and I if we made one too many enemies.

Just as activists are increasingly looking to the court system to adjudicate political issues, we may also be seeing a new use for lawsuits in fights between powerful interests, and those looking to take down the powerful. When elected leaders won’t act, when toxic bullies run unchecked, and the talking heads on TV do nothing but chatter, the black-and-whiteness of the legal system suddenly emerges as appealing. The ability to do real damage, to get your chance to argue your side of things is part of it but it is mostly about wielding the incredible state-backed power of the court system—discovery, getting them to swear under oath, binding verdicts—that conspirators are salivating over.

It was one of Thiel’s final observations about his conspiracy that has stayed with me most as I have watched our grinding political gridlock and this rise of destructive, divisive cultural figures. He said that he had once believed that America was a country with too many lawsuits, and in fact, it was this opinion that initially made him reluctant to explore a legal remedy against Gawker. But as he studied the matter deeper and experienced, eventually, the legal system first hand in backing Hulk Hogan, he became convinced that America is actually a country with too few lawsuits. There were more precedents that could be tested or made, and more urgently, “evil” institutions or people who could and should be held accountable via the civil court system.

While many on both the right and the left might disagree with Thiel and the actions he took against Gawker, there is no denying the deeper truth of what he discovered and the playbook he exposed with those actions. And now, it just may be that some of those very same critics—whether they are liberal billionaires or ordinary activists—are using that very same playbook for causes they deem to be good.

I say, more power to them.

Ryan Holiday is the bestselling author of Conspiracy: Peter Thiel, Hulk Hogan, Gawker, and the Anatomy of Intrigue. 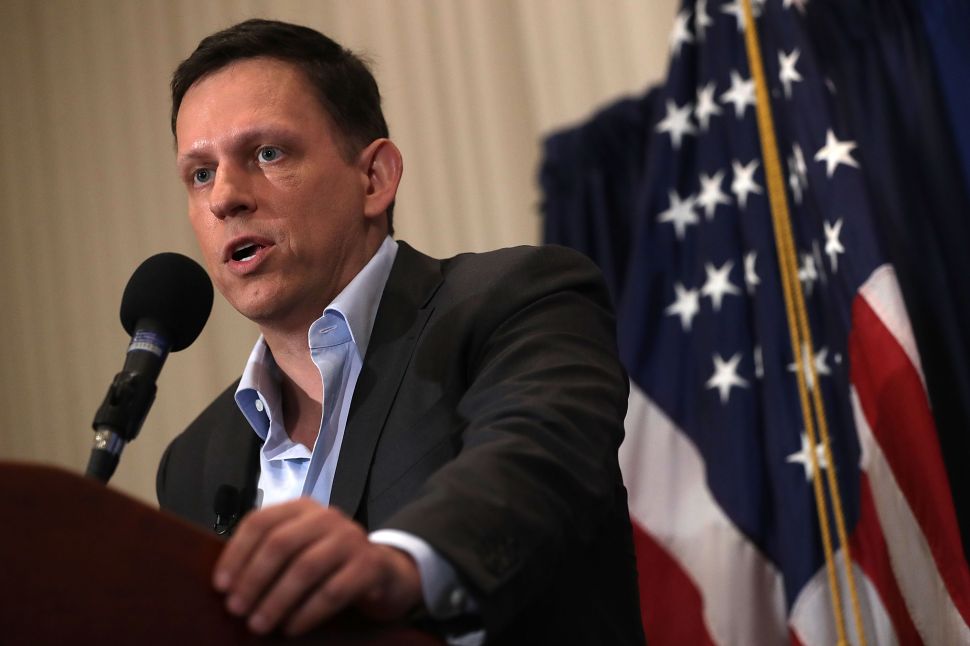