The Setai Tel Aviv opened last month along the Mediterranean Sea when the transformation of a 12th-century Crusader fortress into Israel’s latest and most lavish booking was finally completed. But what exactly does it take to turn a weathered stronghold into a soothing, coastal sensation?

“There is a lot of history to preserve here, so every little detail of these types of projects has to be overseen and approved,” explains Dana Leitersdorf of London’s ARA Design. Her team worked with Feigin Architects, a local firm, and conservation architect Eyal Ziv to reconfigure the historic landmark into an opulent 120-room getaway. The hotel is owned by Nakash Holdings, the multibillion-dollar investment portfolio of the Nakash family, the founders of Jordache Jeans who purchased the original Setai Miami Beach in 2014. Clearly, the cost of refurbishing a historic building wasn’t an issue for this moneyed clan.

The hotel’s original structure, known as the kishle (Turkish for jailhouse), was first built as a Crusader kingdom fortress, then repurposed as a walled Ottoman Empire compound. It was eventually turned into a police station, which it operated as until 2005, when the Nakash family began their transformation.

The Setai has been strategically positioned as a glossy, albeit controversial, invitation to visit Jaffa, the 4,000-year-old port town that has been incorporated into modern-day Tel Aviv.

Jaffa flourished in the mid-19th century, namely for its export of Jaffa oranges, which were initially grown by Arab farmers. After Israel proclaimed independence in 1948, a clash between the Arab and Jewish communities left the district in the dust; Jaffa soon became riddled with crime, hence the police station. As a result, a new port was constructed in northern Tel Aviv, where the bulk of city development continued.

But as Tel Aviv’s real estate market began to skyrocket, Jaffa came back into focus, particularly treasured for its untapped terrain. After decades of revitalization—and millions spent by the municipality—the streets began to bustle. Incentivized to move into Jaffa’s Old City, artists and designers opened galleries and boutiques while cafés popped up on the fringes of Jaffa’s long-standing, haggle-friendly flea market. The area still maintains a bohemian identity, thanks to its hard-working history as a port city.

That’s why locals might raise an eyebrow at The Setai’s $500 per night starting rate, which is one of the highest in Tel Aviv.

Sure, a five-star hotel is more arresting than an old police station, but luxury at this scale has the tendency to scrub a community of its identity. The Setai isn’t entirely alone in this upmarket takeover of the area. The Jaffa, a W Hotel, will also open this season, with 38 residential units, including a lavish penthouse that was priced at $41 million in 2015—the highest listing in the country at the time.

Which all begs the question: Is The Setai Jaffa’s new front door, or Jaffa’s final exit?


In that vein, The Setai has made it a point to avoid burying history. The luxury hotel has quite literally dug up the past and put it on display.

“The most complex and longest part [of the renovation] was the archaeological excavations that preceded the project, and included the courtyards and the interior of the buildings,” Ziv says. Israel Antiquities Authority and Israel Preservation Society both had a hand in the matter, too, ensuring the architectural integrity was preserved according to its origin. That included remains of Crusader and Turkish walls that are now incorporated into the hotel’s décor.

Book a massage in the subterranean spa and you’ll spot historic infrastructure alongside modern wellness: behind the sauna’s glass wall, an unearthed arch is now framed in plain sight. Care for a historic view during your cardio session? In the adjacent gym, treadmills square off along a series of exposed archways.

The bones of the structure, the bulk of which were built during the British Mandate period, have been left mostly unaltered. However, a new wing and two additional floors embrace the original site, lifting the rustic palette with fine finishes including dark woods and polished, creamy tiles.

That’s not to say that it was easy to meld historic details with a modern aesthetic. “You have to find creative ways to draw luxury out of the space—to express the old and the preserved, while still making it feel new and luxe,” Leitersdorf notes.

Upper floors are comprised of guest rooms and suites, while the ground floors house common areas with intimate nooks. Just past the lobby, a lounge is stuffed with plump and patterned chairs and ottomans, assembled underneath a row of vaulted arches. A central building, flanked by lush courtyards on either side, houses the JAYA restaurant in a stone hall; the eatery’s rough edges are offset by soft leather banquettes and a slick Brazilian blue marble bar.

The chain of buildings are now stitched together with glassy hallways that surround two central courtyards that were previously used as prison yards. In a nod to Jaffa’s heritage of orchards, a sprinkling of olive and citrus fruit trees shade tables and chairs from the hard sun.

In an attempt to veer from the hollow and cold feeling of a prison, the designers obsessed over the lighting. In the guest rooms, long, cylindrical lanterns hang from the ceiling on either side of the bed, encased in a metallic, Arabic-patterned frame; a cluster of chrome-tinted glass pendants shimmer in the corner. Sunlight beams through large stone archways outfitted with doors that open to petite balconies.

Artifacts discovered during the construction of the hotel will also be on display. Expect to see 12th-century coins and cups, in addition to the most striking find: a trove of weapons dating back to approximately 1890, an era that has been dubbed the late Turkish period. The lobby bar already serves spiked drinks and skewered olives, so surely a couple of Medieval spears will be right at home.

“We didn’t want to fill the hotel with traditional Turkish decor and be too on-the-nose with it,” explains Leitersdorf. “There are subtle accents, like Turkish rugs in the rooms and antique pots and trays in the restaurant, that nod to the roots of the property.”

There’s no need to brace yourself for ancient amenities, either—the guest rooms are a familiar ensemble of modern hospitality, all set in stone. The flat-screen TVs are equipped with the usual array of movie channels, USB chargers are built-in and mini-bars are well-stocked.

Setting the scene for a new port of call, the star of the hotel is a fourth-floor rooftop infinity pool; facing east and located right on the Mediterranean, it’s like diving straight into the horizon.

Only time will tell what this new outlook will mean for Jaffa’s urban fabric. But by marrying historic details with extravagant modern amenities, The Setai has made a strong case for the potential of the area’s luxurious future, without suppressing its colorful past. 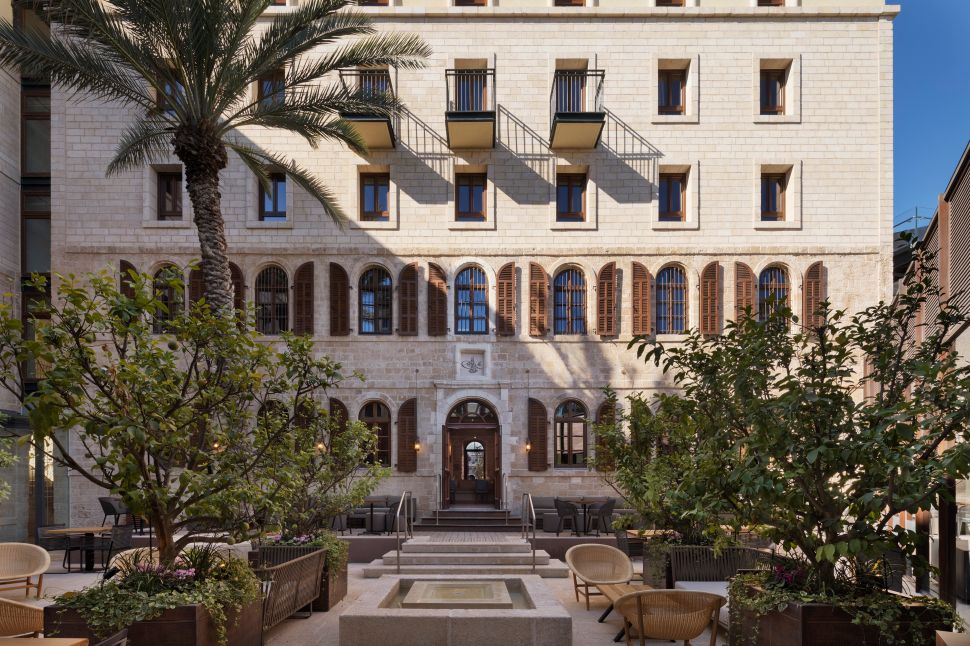