Take a walk down Broadway these days and you think you’re in an episode of The Twilight Zone. Look over there! It’s Hello, Dolly! On the next street, you’ve got revivals of Edward Albee’s Three Tall Women and Mart Crowley’s The Boys in the Band. Travel up to Lincoln Center, by golly, and My Fair Lady is back again.

This begins to feel discouraging, but think about it, and it all makes sense. The old shows are so much better than most of the new ones, and when it comes to musicals, I can think of no time-tested, prize-bestowed masterpiece more deserving of another visit than Rodgers and Hammerstein’s immortal Carousel. So it is my pleasure to report that the brand new, refurbished production of Carousel that just opened at Broadway’s Imperial Theatre, superbly populated by a huge cast that includes Metropolitan Opera diva Renée Fleming, well directed by veteran Jack O’Brien, and magnificently choreographed by New York City ballet star Justin Peck, is a humdinger.

Not only do they no longer write fabulous scores like this one; they don’t even know how. What a thrill for young audiences to discover music that enchants, like “The Carousel Waltz”, and songs that soar, like “If I Loved You” and “June is Bustin’ Out All Over” for the first time. The book, based on Molnar’s Liliom, about the joy and tragedy in the lives of mill workers in Maine at the turn of the century, holds up too. The pace drags in Act Two, as it always has, but that’s a minor caveat. Almost everything that happens before your astonished eyes has the same excitement and energy it must have had when it first opened in 1945, on the heels of the innovative Oklahoma!

The plot, moved from Molnar’s Budapest to the waterfront dives and beaches of the Maine coast, involves the passionate but doomed romance between Julie, a pretty, respectable cotton-mill worker, and Billy Bigelow, the roguish, troublemaking, good-for-nothing lady-killer who works as a carnival barker and operates the merry-go-round in an ocean-view amusement park.

Billy is destined from the start for either the jail or the cemetery, but to everyone’s horror, Julie marries him anyway. There’s a subplot about Julie’s best friend Carrie, who, despite her fantasies about ending up with the distinguished gentleman of her dreams, marries an honest, hard-working fisherman who smells like herring. After the first act finale, which leaves everyone throbbing with poignancy as Billy sings the masterpiece “Soliloquy” in preparation for fatherhood, things turn dour.

It’s no spoiler to remind the mobs who saw the colorful 1956 film with Gordon MacRae that Billy dies in a robbery that backfires, ends up in Heaven for 15 years, and returns for one day to right the wrongs he has caused, and present to the daughter he’s never met the gift of a celestial star. The show turns unavoidably sentimental, and the treaclish “You’ll Never Walk Alone” leaves a number of people, onstage and in the audience, dissolved in tears.

Never mind. Agnes DeMille’s inspired ballet centerpiece in Act Two still works sublimely in Justin Peck’s choreography, the athleticism in the rest of the dancing is hearty and energized, the classic score lifts otherwise dark subject matter to the sky, and there is not a weak voice or anemic performance in it. Jessie Mueller is lovely and warm as Julie, bringing radiance to the stage every time she lifts her voice in song. One of the happiest surprises is Lindsay Mendez as her loyal sidekick Carrie, whose crystal voice turns “Mister Snow” into melodious magic.

Alexander Gemignani adds a special brand of humor as her awkward fiancé, Enoch Snow. And of course Renée Fleming as the matronly cousin, Nettie, knocks the ball over the boardwalk when she belts out “Real Nice Clambake,” or duets with Julie on the gorgeous “What’s the Use of Wond’rin?”

Joshua Henry, as the controversial Billy Bigelow, has neither the scrubbed appeal of Gordon MacRae nor the mercurial glamour of the great Hugh Jackman, my favorite Billy of all time in the 2002 sold-out concert version of Carousel at Carnegie Hall, but he has a lumbering presence and a powerful voice, and he also finds the hidden heart beneath Billy’s brutish exterior. It’s a role that is hard to like and easy to misunderstand, but he wins the audience over with justified ovations. This is one musical that you risk overlooking at your own peril, a vein of Broadway gold that I hope runs forever. 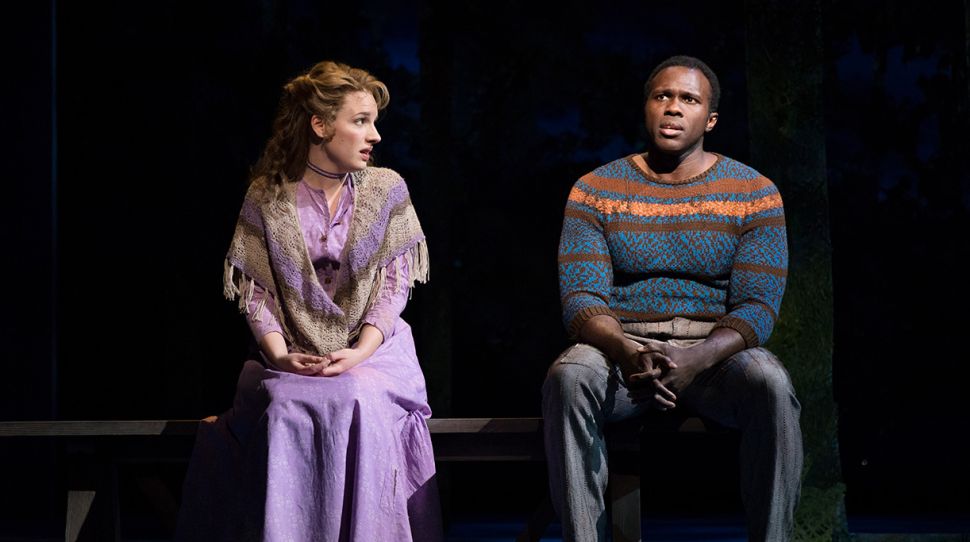