Though the two warring camps continually rehash an election that ended two years ago, trapping the American people in a perpetual nightmare between the two most disliked presidential candidates in U.S. history, they found common ground in questioning Comey’s handling of federal investigations.

“Comey has a lot of tough words for Trump now, but while in the job, he sure did his best to avoid getting on Trump’s bad side,” wrote Clinton’s former press secretary Brian Fallon on Twitter, noting contradictions in Comey’s reasoning to reopen an FBI investigation into Clinton’s use of a private email server.

Comey to ABC: "If I ever start considering whose political fortunes will be affected by a decision, we're done."

Also Comey to ABC: "All of us were operating in a world where the polls were showing that Donald Trump had no chance"

“I wish that Mr. Comey reflected a little bit more deeply and maybe called what he did a mistake because I think it was,” Mook told CNN last week in response to the publication of Comey’s book A Higher Loyalty. “Particularly because he talked so much about how important it is to follow the rules and follow the law, there were really clear rules in place that he shouldn’t have done what he did and he chose to break them. And, apparently did that based on politics.”

As hordes of Americans commuted to 9-5 jobs the morning following Comey’s ABC interview, President Donald Trump condemned Comey—who insisted Trump was “morally unfit” for the presidency after allegedly demanding a “loyalty” pledge from him.

“Comey drafted the Crooked Hillary exoneration long before he talked to her (lied in Congress to Senator G), then based his decisions on her poll numbers,” tweeted Trump on Monday, accusing Comey and fired FBI deputy director Andrew McCabe of committing “many crimes” at the FBI.

Comey drafted the Crooked Hillary exoneration long before he talked to her (lied in Congress to Senator G), then based his decisions on her poll numbers. Disgruntled, he, McCabe, and the others, committed many crimes!

White House aide Kellyanne Conway appeared shortly afterward on CNN to attack Comey’s interview—in which the former FBI director compared Trump to the mob and called the existence of a tape of Russian prostitutes urinating on the president “possible.”

“[Comey] loved being alone in the Oval Office. He wanted a piece of it,” Conway told Chris Cuomo. “This is somebody who’s not under oath in interviews and writing a book. And this is somebody who’s given a revisionist version of history. The president hardly knew the man.”

Conway also seemed to suggest Comey’s reopening of the Clinton investigation “swung” the 2016 election in Trump’s favor, though later clarified on Twitter she was “kidding.

Comey was widely condemned by lawmakers across the aisle during the 2016 election; first by Republicans after initially dropping the investigation; then by Democrats for opening it just days before the election.

“I knew this was a no-win situation, this case,” Comey said of the scandal on ABC. “America is in an unusually polarized state. We’ve just opened a criminal investigation of one of the people who will likely be candidate for president of the United States in the middle of that viciously partisan atmosphere. One half of the partisan divide is going to be angry at us no matter what we do.”

Two years after the election, the two U.S. political parties remain entrenched in tribalism, with representatives from both halves angry at Comey. Despite playing politics for optics, the former FBI director wanders the media landscape as a multi-millionaire leper; likely unsure which future presidential candidate should benefit from his book sales. 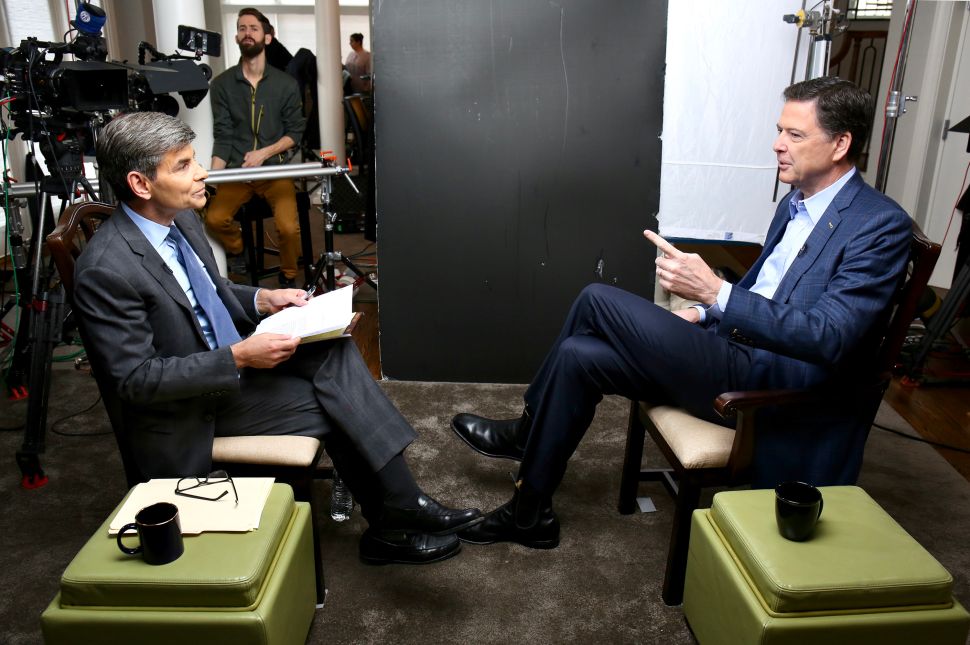