Some people choose to see the ugliness in this world. The disarray. We choose to see the spoilers—through the first episode of Westworld season two—contained in this post. Is it order and purpose you’re looking for? Head here to explore Observer’s latest Westworld news, theories and analyses.

After an endless string of Facebook corruption think pieces that have made this show terrifyingly relevant, we’ve finally arrived at a new season of HBO’s Westworld.

Congratulations, you’ve made it much further than the Man in Black ever did in that silly maze.

“Journey Into Night” helped set up the overarching mission of season two, prepping viewers for the expansion of this world and emasculating Sizemore in one fell swoop.

But given how stuffed this episode was, we have some pretty big questions kicking around in our normal human brains that definitely can’t be ejected intact by cutting the top of our heads off and digging around in our craniums before uploading our experiences and DNA into some mainframe.

Fair Warning: This post contains a thorough de-bugging of tonight’s opening chapter, so if you haven’t seen it yet, make like Peter Abernathy and disappear.

What is “Journey Into Night?”

Written in the early 1940s but not published until 1956, Long Day’s Journey into Night takes place on a single day in August 1912 from early morning into midnight. It follows a family of four—mother, father and two sons—as their sharp critical self-analysis and brutal honesty to one another about their debilitating flaws (morphine and whiskey addition, miserliness, sickness and promiscuity) threatens to tear them all apart.

It’s not a stretch to think that creators and showrunners Jonathan Nolan and Lisa Joy used this framework as a parallel for Westworld, especially given the show’s layered representation of succumbing to vices and its time-hopping narrative tricks. Ford, Dolores, Maeve, Bernard and William/Man in Black could all fit into several different character molds from O’Neill’s play.

In a way, they are all a twisted kind of family; Ford and Arnold as the creators, Dolores, Maeve and Bernard as the children with William/Man in Black rotating between positions. As in Long Day’s Journey into Night, each character’s actions have a dramatic effect on the others. Which narrative will become the dominant storyline through which the others flow?

Thematically, the two projects also seem to align as O’Neill’s play ends with equal parts catharsis and tragic resolution, a path we seem to be taking in Westworld as well.

What was Arnold really afraid of?

In the opening scene, we see a conversation between Arnold and Dolores in which the former Westworld founder expresses his fear of what Dolores could develop into. This is a stark departure from our previous snapshots of the man. Throughout season one, we only see Arnold pushing Dolores towards consciousness, and now he suddenly voices doubts and concerns.

These trepidations are foundational emotions of the dangers of the artificial intelligence sci-fi genre. In this case, they are also well-founded as Dolores spends the entire episode on a killing spree. (Side Note: This was during a corporate party at Delos, meaning significant others and random party guests who likely had nothing to do with the horrors of Westworld were in attendance, not to mention service staff just doing their jobs. Dolores absolutely killed a bevy of completely innocent people in this massacre).

Despite his misgivings, he equips Dolores with the necessary tools to destroy the early Westworld model in a long-ago bloodbath (“these violent delights have violent ends”) to stop the opening of the park in an attempt to spare the consciousness-gaining hosts from a lifetime of brutality. Though his intentions were noble, it’s fair to argue that the destructive Dolores of today would not have been possible without that formative experience.

Arnold helped create what he feared most, which seems to be a common occurrence throughout human history.

What the hell happened in the missing two weeks?

When Bernard wakes up on the beach surrounded by Delos military (including Get Out‘s Betty Gabriel) and the missing Hemsworth brother, we find out that it has been two weeks since Dolores’ robot uprising and no one knows what the hell happened, including Bernard.

As they would say in Mad Men, that’s “not great, Bob.”

Bernard is suffering from critical corruption and though a quick injection of host fluid seems to temporarily stave off complete shutdown on the night of the attack, we see his hand begin to tremor again back in the present. Why is Bernard suffering from a significant system failure while other hosts seem to be doing just fine? This is also a nifty way of adding some stakes to his storyline, which could have been dulled by the fact that hosts can be healed. Critical corruption does not sound like it can be fixed with a simple iOS update.

Oh and one last tiny thing: WHAT THE HELL DID HE MEAN WHEN HE SAID THAT HE KILLED ALL OF THE DEAD HOSTS FOUND IN THE SECRET MAN-MADE SEA?

You know that feeling when you wake up after a night of black out drinking and can’t remember a single thing? …We don’t either… But this blank spot is just like that extended to the nth degree and will be one of the central questions moving forward.

We can’t understand where the show is at now until we discover what exactly happened during that elapsed time.

Charlotte tells corporate that she delivered Peter Abernathy, Dolores’ host father, who we know from last season had been uploaded with 35 years worth of data (more on that in a bit) and smuggled out of Westworld.

But if he never made it out of the park as her bosses say, then where is he? Is he among the pile of dead hosts floating in the sea? If so, does that mean Bernard killed him under some pre-programming from Ford, who became aware of Charlotte’s plans? If not, where is he? How horrible is Delos Incorporated for refusing to send help until they got their hands on Abernathy?

We know Abernathy will play some sort of crucial role in season two, especially with all of that vital information flowing through his circuit boards. Our guess is that he and Dolores will be reunited at some point this season.

Why is Delos/Westworld harvesting guest DNA and experiences?

During the Westworld panel at the Tribeca Film Festival last Thursday night, Nolan pointed to Google and Facebook, the two largest investors in artificial intelligence, as relevant real-world examples that can be tied into the series. He expressed doubt that the companies’ responsibility to its customers aligned with its responsibility to its shareholders, a dangerous divide.

This notion seems to take on its own form in Westworld with the revelation that offline drone hosts—those creepy faceless white androids—have been extracting guest experiences and DNA from the park robots. This is about as shady as it gets (shoutout to Cambridge Analytica) and could be why Delos is so gung-ho about getting its hands on Abernathy.

What could you do with all that information and personal data?

Bernard flashes a look of fear when Charlotte tells him that they’ll only be granted access into that secret room by scanning their hands, yet the door opens when he tries it. Inside, he becomes (understandably) spooked by the drone hosts, but Charlotte tells him not to worry as they have already scanned his DNA and know he’s not a threat.

Is it possible that when Ford designed Bernard, he implanted a bit of Arnold’s DNA? If that is the case and it’s possible to create host clones that can pass a DNA test, could Delos have a more sinister conspiracy in mind? Is Westworld brushing up against Annihilation territory with the idea of sending human copies out into the world while disposing of the original?

Right now, we don’t know exactly why the corporate executives are doing this or what they are using the information for, but we can safely assume it’s nothing good.

What is The Door?

Last season was built around the Maze as the Man in Black cut a violently bloody path to the center of it, only to discover that it was a metaphor for a host’s journey inward en route to consciousness. That must have been more anti-climactic for him than The Hobbit movies were for us.

This season seems to be built around the Door, as the child host version of Ford tells the Man in Black (whom one of his associates called Bill and I just can’t stop laughing at the idea of this “mass murderer” being referred to by such a friendly name) that it ends where it all began. To us, that means Bill (LOL) will once again need to track down Dolores.

Based on the season premiere, it appears as if Westworld has somewhat pulled back on the mystery box puzzles in favor of putting the character ideologies at the forefront, which I support.

While I very much enjoyed season one, I felt as if proper character development was sacrificed in favor of mind-bending twists and turns (many of which the fandom saw coming ahead of time). Season two seems to be composed of a couple key mysteries that are there to support the main players instead.

Assuming the Door is similar to the Maze, its meaning could be two-fold: a literal door out of Westworld that will lead the hosts into civilization and the broader concept of freedom and liberation in general.

However, if either of those are accurate, why tell the Man in Black? He wants stakes that are real so that he can find true meaning in Westworld, but he doesn’t seem to be the type to actively assist the robot uprising against humanity. Perhaps this is his journey back into the more compassionate man he once was just as it is also Dolores’ quest for freedom. 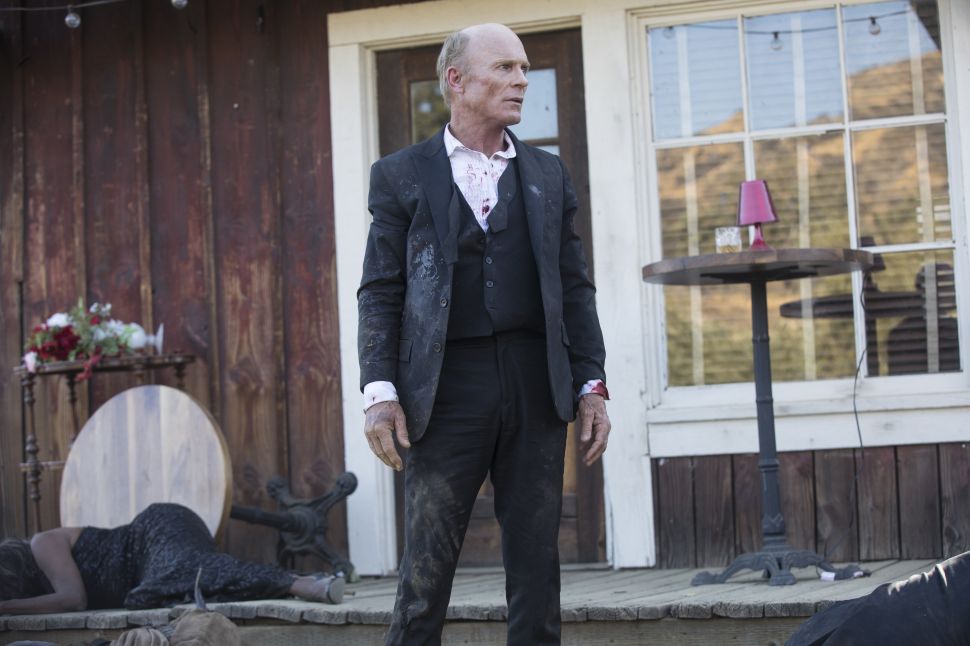