HBO’s Westworld is a complicated show with several layers of intricacy to explore. While most viewers are naturally drawn to the twisty plot points and shock reveals, we’re equally as intrigued by all of the science that goes into the show.

If we stand any chance against artificial intelligence in the inevitable robot uprising, we need to start paying attention to these things.

So in our quest for knowledge (and our preparation against the T-1000), we sought out David Eagleman, a neuroscientist and adjunct professor at Stanford University in the Department of Psychiatry and Behavioral Sciences who consults Westworld on all things… smart.

Eagleman, who was busy discussing the ins and outs of the science behind the show at the Rubin Museum of Art, revealed to us just how realistic Westworld‘s technology is, how far away we might be from our own cowboy robots and what viewers can learn from the series.

You’re a neuroscience advisor for Westworld. I’m a writer who barely passed high school math. Talk me through what exactly your role with the show entails.

The folks who run Westworld, Lisa Joy and Jonah Nolan, are extraordinarily smart and capable people. I talk to them about the brain and consciousness and whether it would be possible for a robot to have consciousness. What would it mean if they did and what would it look like?

Again, these are really smart folks running the show, so they kind of get most of these issues anyway. My job is to bounce ideas with them and discuss technology.

I actually introduced a technology that they ended up liking so much it ended up being in season two. It’s a vest I’ve made that feeds information to the user in a particular way and you’ll see that this year.

But overall, my job kind of runs from talking about big philosophical issues. We recently had a six-hour session debating free will and consciousness, and then we get to very specific things like how we can introduce this technology.

How closely does the show’s science and technology align with the real world?

Well, the show takes place 30 years in the future. They have the freedom to say, “What do we think the real world will look like in terms of the technology that’s available?” Several of the things you’ll see in season two are opportunities for the writers to come up with the next generation of technology and what it will look like.

Because we’re talking about something that is 30 years off, Jonah and Lisa, who are very smart and good at making everything, take the position of: “What do we think would be the most realistic thing possible.” When it comes to androids developing their own sentience and consciousness, that’s just speculation writers and scientists have enjoyed for years. No one knows the answer at the moment.

But the whole notion about A.I. is so much more relevant just because of where computers have gone in the computer revolution. Doing Westworld now, after the 1973 original, is a brilliant stroke.

How close are we in the real world to having technology that approaches Westworld?

There’s plenty of debate about this and the truth is that it’s just a guess into the future. My view on it generally is that A.I. is really good at classification. It’s superhuman in its performance on this kind of stuff. But that’s a long way away from the useful stuff a three-year-old can do like navigate a crowded room and social manipulations. We don’t have a starting point on this for A.I.

A.I. can do wonderful things very narrowly. Humans have general learning abilities. We don’t have to run millions of simulations, we can learn naturally. There are wonderful examples of very specific A.I., but we aren’t near general A.I and generalized intelligence.

Can you name a few examples?

It’s so deeply embedded that we hardly notice anymore. I pull up Google Maps and it’s incredible that we have this sort of thing at our disposal. Google Images generated thousands of images at the touch of a button. It’s those deep learning nets that figure out that that is an angler fish for Google Images.

We’re already so surrounded by A.I. in extremely useful ways that it has become this sort of background radiation.

Is there any merit to all the sci-fi stories like Terminator and I, Robot that A.I. can be dangerous?

There are various voices in the A.I. debate about this. Stephen Hawking, before he passed away, and Elon Musk have voiced extreme worries. I’m not on that side of the spectrum.

As we keep building more sophisticated things, we will build them as a collaboration between humans and machines that help us. Artificial intelligence doesn’t share the same historic evolution as human beings, so it doesn’t have that same survival instinct. It doesn’t care.

I’m not particularly worried about that scenario of a takeover.

Thank you, you’ve assuaged many of my doubts about the robot uprising. I’m an entertainment reporter so based on all the movies and TV shows I’ve watched, I just assumed the war with the machines was right around the corner.

Good, I’m glad I could help.

I understand you have a particular focus in the neural basis of time perception. Westworld plays with different timelines from a storytelling perspective. What kind of effect, if any, does this time-hopping narrative have on the audience?

It’s a very lovely effect. We all naturally assume when watching a story that it is starting at point A and proceeding to point B. It’s a cool surprise when we discover that the Man in Black is actually William.

All these sorts of tricks aren’t new to Westworld or television. But it is a neat way to bury things into the plot. You can jump around in time and have things come out the way you want them to and reveal things through the season as you want to come out.

And in general, what do we need to know about the neural basis of time perception?

The main thing I study in the domain of time is the issue that the body has to collect different signals—hearing, touching, space, smell, etc.—and all this going to the brain. But it gets processed by different areas of the brain at different speeds. The brain has to collect all of this stuff and piece together what happened.

So the moment you think just occurred (snaps fingers) could have actually happened a moment ago because the brain has to piece everything together. You actually live in the past as your perception is a moment behind.

That’s fascinating but you’ve also scared me. What can viewers learn from Westworld?

It’s sort of in this very slow direction of biology to increasingly view ourselves as machines. We are extraordinarily sophisticated in every way, and we’re just scratching the surface, but we are fundamentally biological machines.

But there’s something so interesting in exploring that territory in between. What happens when you build a machine so sophisticated that it is actually like us? 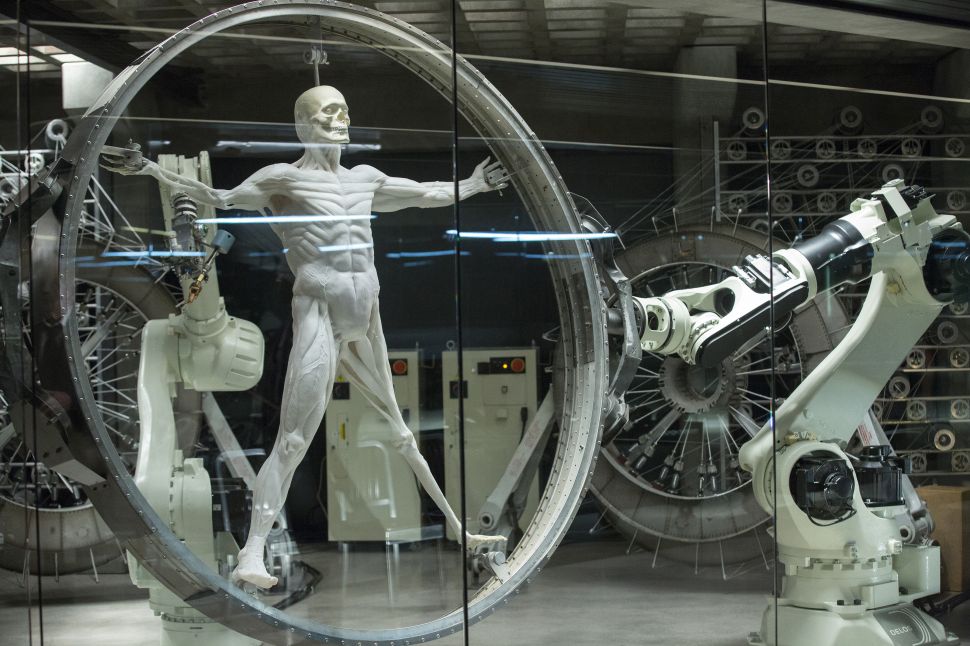