To a paraphrase a line from Westworld‘s season two premiere, our greatest fear is to perish without purpose, but perish we must. Both the human and host characters of HBO’s sci-fi drama can be killed, but when and how exactly will they be decommissioned? That’s what we’re wondering: Welcome to Observer’s Westworld Dead Pool where we’re tracking all of the main characters’ survival odds.

Westworld prides itself on throwing viewers for a loop, but can you accurately predict when a character demise is coming? Let’s see where our main players stand after episode one.

OK, so we’re cheating a bit here since we already saw Teddy’s floating corpse in “Journey Into Night,” but we still don’t know how our strong-jawed host with a conscious arrived at that point. Bernard said at the conclusion of the episode that he killed all the hosts, and we do catch a glimpse of him firing a machine gun during one of his blackouts, but that raises more questions than it answers.

Here’s what we do know: Dolores is being very selective when it comes to deciding which hosts are worthy of having a place in her robot uprising as she plots an invasion of sorts against the real world. Thanks to that handy dandy host brain live stream, we can see that she was busy in the missing two weeks killing members of Ghost Nation (realistically, she probably needs every host she can get to take over the real world, but whatever).

We also know that Teddy isn’t 100 percent on board with Dolores’ endless killing spread. “Is this really what you want?” he asks her, clearly dismayed at the violence they have wrought.

Is there a scenario where Teddy’s moral compass gets the better of him and Dolores has to put him down to move forward with her plan? Or are all these dead floating hosts part of a larger scheme to get out of Westworld?

Either way, Teddy is doing what he does best: dying.

Get Your Affairs in Order

Poor Bernard. All the guy ever wanted was to mourn his dead son, sleep with Theresa and tinker with some robots. But by the time season one ended, he had discovered that his son never existed, he murdered Theresa and found out that he himself is a robot.

Talk about a mid-life crisis.

So far in season two, things are only getting worse for Arnold-Lite. He’s suffering from critical corruption (though we don’t know exactly why), he’s missing two weeks of his life and is surrounded by host-executing Delos staff that don’t yet know that he’s a host. He seems to be subsisting on host fluid injections for the meantime, but there’s no telling how long that will last, and the mystery of the machine massacre is sure to lead him somewhere… unpleasant.

Bernard is a well-liked character, but he doesn’t have a clearly defined role going forward (then again, nothing in Westworld is clearly defined). It’s possible that Bernard is retired, while the amazing Jeffrey Wright remains in the show through flashbacks. Possible, but unlikely despite his uncertain current standing.

I’ve mentioned already how funny it is that this sociopathic murderer is known as “Bill” to his colleagues, like he’s some friendly face that always brings the burgers to the company cookout. But Bill best watch his back in this new Westworld where hosts can—and are—killing every human they can find.

The Man in Black has been desperately searching for meaning in Westworld, real stakes that give his life significance and a modicum of truth. Well, what’s more high-stakes than life-or-death?

We know younger William (Jimmi Simpson) will play a big role in season two and while we’re not expecting the Man in Black to die anytime soon thanks to his new mission of finding The Door, it wouldn’t be a huge stretch to seem him fall before all is said and done. The guy courts violence like Logan sweet-talking a host.

In no world, not west nor shogun, is the series going to kill its two best and most important characters. 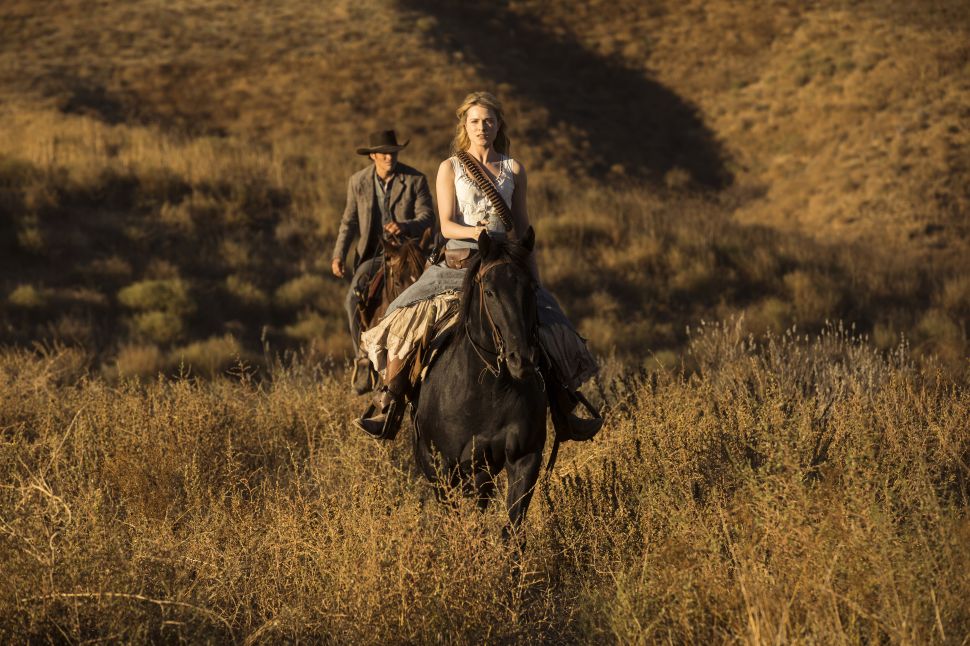