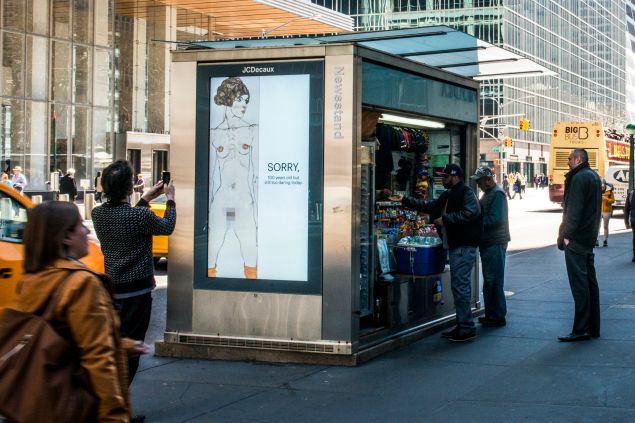 Although the Viennese Modernist’s work remains popular on the auction block and is included in major collections the world over, the installment of his nudes on public billboards and at bus stops in major cities by Vienna’s tourism department to advertise “100 Years of Viennese Modernism” has incited censorship in some of the world’s historically avant-garde cities like Berlin, London and now New York. The ads feature Schiele’s nude portraits of both himself and female subjects, all rendered in his signature angular, anguished style.

The slew of sexy campaign images made their NYC debut this week to promote a spate of Schiele shows opening across the city in the coming months. Major venues such as the Neue Galerie and the Met Breuer, as well as galleries like W + K Gallery and Galerie St. Etienne will play host.

Slated to post uncensored in the U.K. and Germany last winter, the original ads were vetoed even before they launched due to laws prohibiting nudity in public in each country. Rather than pull the campaign, the Austrian tourist bureau opted to cover up the images’ naughty bits with censor bars, adding the cheeky tagline “Sorry, 100 years old but still too daring today.” They also carried the invitational participatory hashtag, #ToArtItsFreedom, referencing an inscription on the Secession exhibition space in Vienna, founded by Schiele’s peer, Gustav Klimt, that reads “To every age its art, to art its freedom.” The move prompted plenty of chatter about the zealousness of censorship today, spearheaded by a piece in the New York Times.

Most of the New York ads are still censored, although a hand-painted mural on the southwest corner of Lafayette and Spring Streets in Soho, officially unveiled today (April 26), displays in full glory a reclining woman, her gaze lowered but far from demure, her legs open to reveal pubic hair and—gasp—a very distinct and bright pink vagina. This marks a turning point in conversation about these images thus far, making it less about obscuring inappropriate content full stop and more about prompting the question of how censorship functions in our current society. 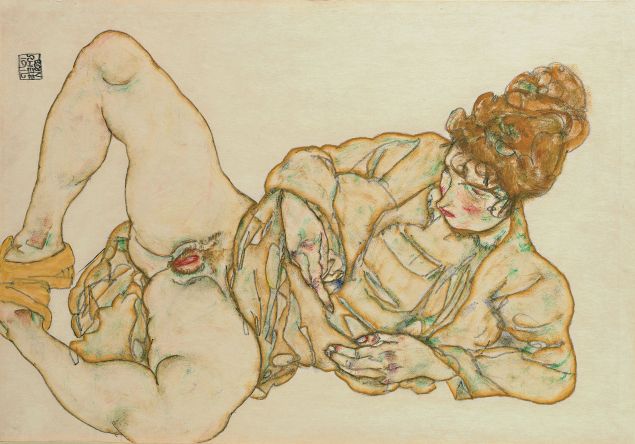 Indeed, I think the way the Vienna Tourist Board initially handled the censorship issue in Germany and the U.K. was shrewd because the blatant obscuring forced viewers to think about what they weren’t seeing. Given that most of our contemporary media platforms use algorithms fueled by surreptitiously harvested data to make sure we only see what they think we want to see, being confronted with something partially hidden begs us to reconsider what “censorship” even is these days. Content that is censored in one’s view serves as more of an invitation to seek out the full “story”—all too easy to do, yet there’s so much we don’t realize being obscured from our sight. Or perhaps we do realize, but continue to participate in the systems that foster these practices.

As we all continue to check Facebook even after all of the company’s recent missteps, should we consider censorship forced upon us or something we’re complicit it? Who is it benefitting from it? And in what ways are we being conditioned to self-censor by changing our speech, dress, bodies, or what we “share” in order to fit into the ideals promulgated by our over-saturated media environment?

Now that Schiele’s nudes have been plastered around New York, I’m glad that we’ll be the first city to debut a giant uncensored vag, because it opens up a discussion about our cultural body issues in general by underscoring how we view the female form. I’m a fan of female nudity when it doesn’t gratuitously objectify women as sex objects or press our bodies into the service of others’ pleasure and success. But like the images of airbrushed models we’re confronted with on a daily basis, most nudes in the Western art canon are idealized. They are simple manifestations of desire, not autonomous beings in and of themselves. 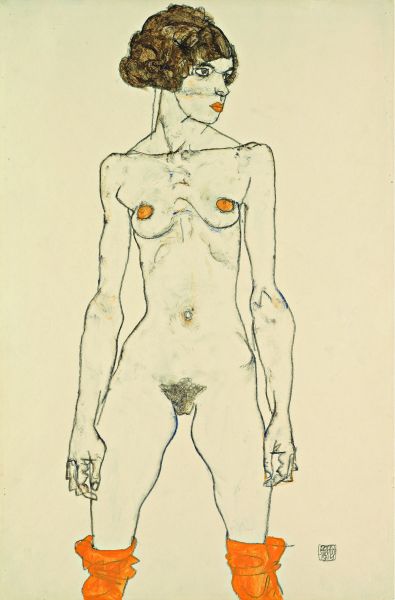 Schiele’s art, however, presents figures that are complex and far from ideal. Both his female subjects and his self-portraits are confrontational and awkward all at once with arms at odd angles, skin that looks mottled yet stretched tight over bones, eyes that bore or sometimes just look bored. These figures are sexual but they aren’t just there for sex. That’s what keeps them from being purely pornographic.

I’d go so far as to say that the installation of this uncensored ad in particular invokes much more than a conversation about gender. Schiele’s nudes, both compositionally and ideologically, are rife with tensions that still inform our perception of his work. His Vienna of a century ago was a hotbed of creative and scientific boundary-breaking—let’s not forget that Freud was pioneering his phallus-focused psychology during this time, too. Yet though social and gender norms were changing, and people were questioning the political and cultural structures in which they’d been brought up, Shiele’s work was still called pornographic and disturbing when it debuted.

Schiele’s work is a product of a time when, as with now, rapid social change ignited fear and fueled anxiety, spurring a desire to erase, evict or otherwise censor that which feels foreign or uncertain. That which doesn’t fit a staid worldview that may not be perfect but at least feels known. Then, the desire to unsee difference resulted in the rise of a nationalist regime that led to the persecution of millions just because of the body they happened to inhabit. Now, well…such persistent political issues like systemic bias against people of color, immigration issues roiling the world, and consistent wage gaps between genders suggest to me that millions are still being persecuted based on the sum of their body parts. The magnitude of violence differs vastly, but we must recognize these issues as violences in and of themselves that have real physical effects on people.

So next time you see an Egon Schiele nude around town, whether in full frontal glory or burdened by blurred boxes, look at the figures—their tense muscles, their searching hands aggressively touching themselves, grasping with urgency at their hair, their legs, their skin, seeking comfort or recognition—and ask yourself: how long has it been since you felt like you could relax in the body you are in? How long until our society allows us to enjoy the bodies we have? And how long until we allow ourselves to see that which make us feel uncomfortable?