Thanks to all those Lonely Leo memes poking fun at Leonardo DiCaprio’s quest for an Oscar, we know how hard it can be for a deserving Hollywood figure to go home without a statue year after year. Since we’re all obsessed with tangible confirmations of talent these days, we’ve had to move on to a new leading name after DiCaprio finally won for The Revenant.

When it was announced that Jessica Chastain would be starring in A24’s weighty biopic Woman Walks Ahead, which centers on wealthy widow and portrait painter Catherine Weldon who leaves New York City in the 1890s and becomes allies with the famous Sitting Bull and the fight for his Lakota people, many fans believed this could be the breakthrough role she needed to finally win an Academy Award after two nominations earlier this decade.

Chastain hit a peak from 2011 to 2013 with back-to-back Oscar nominations for The Help and Zero Dark Thirty and has continued turning in quality performances in good movies such as Interstellar, The Martian and Molly’s Game.

Sadly, Woman Walks Ahead will not be the film to push her over the edge.

The film, which premiered at the 2018 Tribeca Film Festival, enlists the tired white savoir motif, but in this case, Chastain’s Weldon doesn’t save anything. Director Susanna White crafts a well put-together story, with the North Dakota locale treated with particular care, but gives far too much credit to our white protagonist.

“Your society values people by how much they have, ours by how much we give away,” Michael Greyeyes’ Sitting Bull says. In that case, I’d have preferred they’d given me a movie that covers both sides more astutely and perhaps something more well-rounded for Chastain.

Once again, she proves to be a highly adaptable actress. That may not be the most scientific breakdown of her acting, but you always buy her in just about any role, which is not the case for all performers out there. So why does she still feel far away from her first gold?

Chastain has been on the ground floor of the Time’s Up movement and has been a known feminist throughout her career whose roles reflect that passion. If anything, it seems like now would be the prime time for her to be at the center of an Oscars campaign. Despite some criticism from fellow actresses about how she’s handled her Time’s Up role, and concern over her own career, she remains a leading woman in Hollywood for all the right reasons.

The Oscars, however, have been on the wrong side of the male-female divide, as evidenced by the age disparity explored by The Washington Post a couple years back.

According to the paper, the average age for winners in the four major acting categories are: Best Actor (44), Best Actress (36), Best Supporting Actor (50), Best Supporting Actress (40). Chastain was 34 and 35 when previously nominated. Though that trend is (thankfully) slowly beginning to change, the unifying theme of recent Best Actress winners does not favor Chastain, now 41, for Woman Walks Ahead.

Frances McDormand’s character fights tooth and nail for justice (Three Billboards Outside Ebbing, Missouri), Emma Stone’s character struggles for respect and success in an industry designed to make her feel lesser (La La Land), Brie Larson claws for freedom and a semblance of normalcy for her young son (Room), Julianne Moore struggled with the betrayal of her own body (Still Alice). Woman Walks Ahead is not a performance story or a character that comes across as equally compelling in their internal quest.

In fact, it may be a bit irresponsible to make a movie about two historic figures but then decide that the white woman is the hero of the story.

Do any of Chastain’s upcoming projects have Oscar potential? It’s hard to say.

Her roles in the upcoming X-Men: Dark Phoenix and It: Chapter II are great opportunities for further mainstream exposure but aren’t likely to draw awards consideration. Her project over at Universal with Oscar-winner Octavia Spencer sounds interesting, as does George and Tammy, Painkiller Jame and Division, but who is to say how they’ll play once they’re here?

A24, which has been on a hot streak recently with Lady Bird, The Florida Project, The Disaster Artist and Moonlight, doesn’t quite deliver this time around and, as a result, keeps Chastain away from that coveted statue.

She’s one of the best actresses working today and even though some arbitrary award does not define a career, it would be nice if Chastain could be recgonized in the near future.

Or at least until we start making memes about her.

You can watch Woman Walks Ahead exclusively on DirecTV Cinema May 31 and in theaters on June 29. 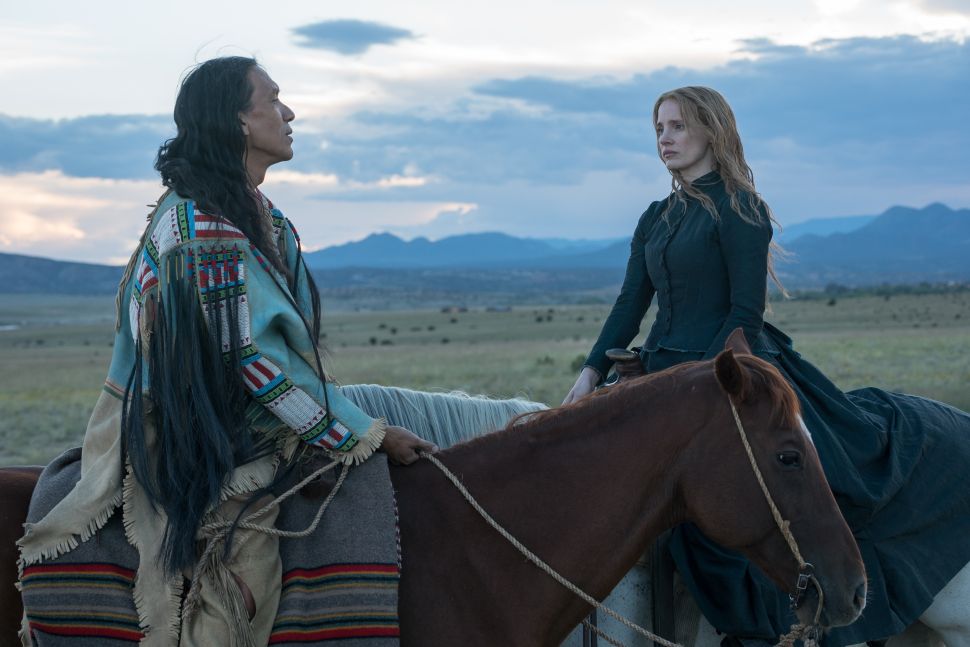