Zachary Quinto is an eclectic player in Hollywood. In the 18 years he’s been active on the professional scene, Quinto has racked up 15 film credits and 26 television roles, while also founding a production company, Before the Door Pictures, back in 2008.

He’s got a lot going on.

But in between having his hand in several different projects and beating back the hordes of reporters looking for a scoop on the next Star Trek movie, Quinto still finds the time to return to his first love: theater.

The stage is where many an actor has cut their teeth and developed their craft. Ask any entertainer and they’ll tell you there’s nothing quite like performing in front of a live audience. Quinto is no different, though the actor best known as the new Spock and the serial killer Sylar in Heroes is taking on a whole different kind of animal with his next role.

Starting later this month, Quinto will be starring in the 50th anniversary production of The Boys in the Band, a groundbreaking dramedy that furthered LGBTQ represenatation in the arts.

Not only is it a great role for any actor and a chance to work with talented castmates who also happen to be longtime friends—the play co-stars Matt Bomer, Jim Parsons, Andrew Rannells and more names you might recognize—but it also represents a next step in how the LGBTQ community is seen in entertainment.

Were you familiar with The Boys in the Band before stepping into this role?

I had never seen it. I knew of it. I had read scenes. I had known of it from drama school. But I’ve never seen a full production of it. So I wouldn’t say that I was more familiar than most people. I knew the history of it. In some ways I knew the stigmas that were attached to it more than I knew the play itself. Now that I’ve really gotten familiar with it, I feel like I have a much more complete and well-rounded appreciation for it.

Was there any trepidation on your part or struggle against being overly reverent of the material for the 50th anniversary?

I wouldn’t say I was concerned about over-reverence. If anything I was concerned with how the play resonated for a contemporary audience. And my trepidations were calmed by the many conversations I had with Joe Mantello and Ryan Murphy and David Stone about why to do this play now. The more we spoke of it and the more I reread it, the more I understood, actually, what an example it is for how far we’ve come and how far we have to go in terms of acceptance for the LGBTQ community but also acceptance within the community and acceptance of ourselves. I think the play is a real touch to that particular psychological examination, which is to say loving ourselves as human beings is not easier in the 50 years since the play was originally produced.

I think that socially and politically for the LGBTQ community, things have evolved and in many ways things are much easier today than they were 50 years ago, but I don’t think that’s always true within people. That’s really what this play is looking at. I can just see the resonance of it psychologically and the kind of universality of the play actually from a psychological standpoint.

Representation has improved recently with films like Moonlight, Call Me by Your Name and Love, Simon. But, to your point, acceptance of yourself may not have come as far as we think. How can entertainment like this help take that next step?

I think all those projects that you just mentioned have at least one straight actor playing gay characters or in some cases all straight actors playing gay characters, so the idea of representation I think is really important. This is a production that has an entirely openly gay cast. Every single member of the cast is out and successful, accomplished, working. We have a gay director, gay producer. Representation in this production is really the cornerstone of what sets it apart. The original cast of The Boys in the Band in 1968 struggled, in some cases all their lives, all their careers, to reconcile these two aspects of who they were. Actors and men, and gay men at the same time. How they married those two identities was in some cases an insurmountable hurdle for some of the actors. And so I think that idea of accurately representing who these characters are and the characters who are playing them in terms of their identity and authenticity is really exciting.

I think we need to continue in that direction and adjust to the way that straight actors are given the opportunity to play gay characters. I feel like gay actors getting the opportunity to play straight characters is something that we’re all working toward and striving for. That’s sort of one of the conditions that hopefully this production will strengthen because we are all people who are standing up and saying this is who we are. We’re not afraid of our history or our legacy, where we come from and leaning into that aspect of ourselves to create these characters is an exciting thing. I think it’s a thing that indicates that all of us are willing to stand up and be talented and hopefully that commitment will lead to some opportunities for us as actors as well.

You’ve put together a very eclectic career between TV, film and stage. I’m just curious what is the biggest pull of each medium. Which is your favorite overall?

My favorite is theater. It is my past, it is how I began acting, it is how I came to appreciate the art form. And I have been in the theater since I was a little kid so I am never happier or more comfortable than when I am doing a play. There is something about it that’s totally ineffable and really exhilarating and the ritual of it, the kind of devotional quality of doing theater, is something that keeps me inspired and motivated in a way that I can’t explain only to say there is nothing like it.

I love also film and television for different reasons. Film is kind of like a flash mob of an experience. People come together. Everybody channels their energy into telling one story and creating one experience for a finite amount of time. There is something immersive about it, right. And you’re capturing something and everybody scatters and goes a different way when it’s done.

And television is more of a long game. Theater is too. But if you’re in a series, you get to live through a character through many different iterations of the narrative and there is something really sustaining about that. You build a tight ensemble of people that you’re working with for season after season and there’s a trust that comes from that. But it’s peppered with a kind for variety that I think is really exciting and nowadays, especially in television, is a medium which there seems to be no limit. That’s really exciting.

Yeah. It is true if you think about it. Theater is the only place that the actor is ultimately responsible for the audience’s experience. Obviously with the support of the stage management and the board operator’s, but once the curtain goes up in terms of the audiences connection to the play or to the material, it’s really kind of solely in the hands of the actor. When you’re making a film or a television show, yes, you’re making one contribution, but we basically show up, stand on our mark and say our lines and then the editor and the director and the music supervisor and the sound… all these people come in and they add their touch to it and shape what it is that we as actors contribute. It’s exciting in its own way.

I’m sure you appreciate when the boom guy goes ‘hey, great take,’ but it’s not the same as hundreds of people applauding.

You’ve worked with some really amazing content creators: Tony Kushner, J.J. Abrams, Ryan Murphy, the list goes on. Have you plucked any of their approaches or specific qualities and applied it to your own career, especially as a producer?

All those people are really amazing and inspiring and accomplished in their own ways. I think that what J.J. has built has been a kind of beacon for me just in ethos. The way that he brings people in. The spirit of collaboration that he engenders in people. Even just going to the Bad Robot offices is like an excursion, like a field trip. There’s just so much to see. It’s like an idea factory. I think also because he was one of the early people I worked with that he set that kind of tone for me, an aspirational tone.

I love Kushner. I love how he works. I love the kinds of stories he tells and the joy he takes in telling them. Ryan is somebody else that I look to for inspiration and his spirit of authenticity and uncompromising creative vision. His loyalty. His commitment to the people he collaborates with. The opportunity he creates for actors I feel is really unparalleled and I’ve been really lucky to benefit from that. I think J.J. and Ryan are the two people who have influenced me most in terms of what I aspire to.

What is one thing about yourself that your fans would be surprised to learn?

I guess most people know I play the banjo now. I usually say that, but I feel like I’ve said it too many times… I hate tomatoes. I hate celery.

I have found that if you hate tomatoes, you like ketchup and if you’re like me and you hate ketchup, you love tomatoes. It’s a very strange dichotomy.

I also hate cilantro. It’s one of those genetic things then.

If you could have dinner with one fictional character, who would it be?

That is a very creative loophole answer. In all my years of asking this question, I have not heard something quite like that.

Glad I could give you something new. 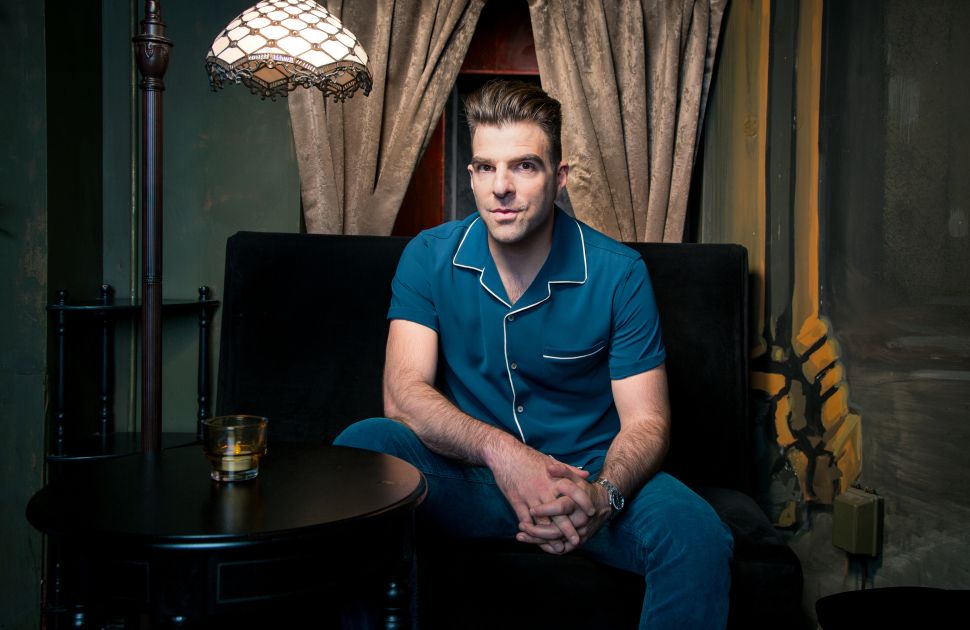