Lawyer Aaron Schlossberg tried to run away from reporters who wanted answers about his racist rant against Spanish-speaking restaurant workers. But on Friday night, he could not escape: a barrage of more than 300 enraged New Yorkers and a mariachi band besieged his apartment complex—Latin Party-style.

Schlossberg—a New York-based attorney who is fluent in Spanish, conversational in French and has basic knowledge of Madarin Chinese and Hebrew—insulted and shouted at two women workers at the Fresh Kitchen in Midtown Manhattan for speaking Spanish and threatened to call U.S. Immigration and Customs Enforcement (ICE) on them, as first reported by Gothamist.

A man named Edward Suazo posted the video of the encounter on Facebook. Schlossberg has reportedly been seen attending rallies in support of President Donald Trump.

The “Latin Party,” which was initially organized by three activist groups but ended up getting support from an additional seven groups, started late Friday afternoon outside Schlossberg’s complex on West 60th Street and continued Friday night.

Carlos Jesus, president of Young Progressives of America, one of the groups that organized the party, said his family is from Cuba and that he was born in Spain while his parents were heading to the United States. He came to the country at a young age.

“Racists are not welcome here,” Jesus proclaimed, garnering loud cheers from the crowd. “If you wanna speak Spanish, speak Spanish!”

He called on New Yorkers to continue to fight against discrimination, referring to the Trump administration’s immigration policies.

“We live in 2018 and we have someone in the White House who has empowered people like Aaron to do these racist rants but the reality is that we will fight back and the response has been immense,” Jesus continued. “He has been shamed, he has been kicked out of the place where he works at. Right now he’s hiding. I’m not even sure he’s there is he? Do you think he’s there?”

Roughly 30 minutes before the party started, songs such as Camilo Monteverde’s “Varios Perdones” and singer Marc Anthony’s “Si Te Vas” and Fruko Y Sus Tesos’ “El Preso” were playing in the background. An NYPD barricade was set up in front of the apartment complex, and 11 police officers were standing outside of the entrance.

As the party picked up—starting with 10 or so individuals but eventually rising to more than 300 individuals—attendees chanted “Throw him out!,” “No Trump, no KKK, no racist USA!” and “Hell no, we won’t go!” Protesters were also seen eating tacos and dancing and shaking to the late Selena’s “Bidi Bidi Bom Bom,” Luis Fonsi’s “Despacito” and Daddy Yankee’s “Gasolina.”

A mariachi band also showed up two hours into the party, facing the complex and playing their music as attendees roared and cheered.

At one point, attendees faced the complex and vowed to stand up racists.

The groups initially planned to host the party outside of Schlossberg’s law office but opted to hold it outside his apartment complex after he was kicked out of the office space that he was using for his private firm.

Schlossberg, whose law office was also bombarded with one-star reviews on Yelp, is a repeat offender.

Last May, he yelled names at pro-Palestinian protesters. He also assaulted and called Willie Morris, a white man from Massachusetts, “an ugly fucking foreigner” on the sidewalk of Fifth Avenue.

Michael Hoffman, a physician from Orange County, New York who knew Schlossberg, came out to the party to express solidarity with the protestors. He said Schlossberg deserves to be “punched in the face.”

“We were in the same wedding party of my friend,” Hoffman said. “Aaron and I went out to clubs together and I knew then that… Aaron was a narcissistic dick,” Hoffman said, eliciting laughter from the crowd.

Bronx resident Jessica Flores, 28, told Observer Schlossberg’s comments were an insult to immigrants, who she noted come to the United States to seek greater opportunities.

“We’re all Latinos, we all come from different backgrounds of Latin culture but once you insult one, you insult all of us and it’s [the party] just for him to see that we’re coming together as a community,” Flores said. “We also wanna show him the type of people we are, what we can do for our culture.”

And she stressed that bilingualism is a key skill to have, noting that it has helped her in her job at Radio City because she often deals with tourists.

“We have people coming all over… just to see that landmark and when they say, ‘You’re a bilingual person? We’ll take you in,’ why? Because it’s easier for us to communicate with other cultures and I don’t know if he forgot that,” Flores continued. “Even his bio says he’s fluent in Spanish, Mandarin, French.”

Ibrahim Nasser, 26, a resident of the Bay Ridge section of Brooklyn who is Arab, said that after the September 11, 2001 terror attacks, an old lady attacked him and his mother, telling them to “go back to your country” and calling them “animals.”

He told Observer he has a lot of friends who are Latino and that he can relate to discrimination-related issues because it is “something I live with every day.”

And he said that whether Schlossberg loses his license or not—two elected officials recently filed a legal complaint against him—he is focused on being present and letting people know that the city “will not stand for such racism, for such disrespectful behavior.”

And the Latin Party is not the only effort to send Schlossberg a message about messing with Hispanic individuals—a mariachi band will also be playing outside Schlossberg’s law office in the near future. 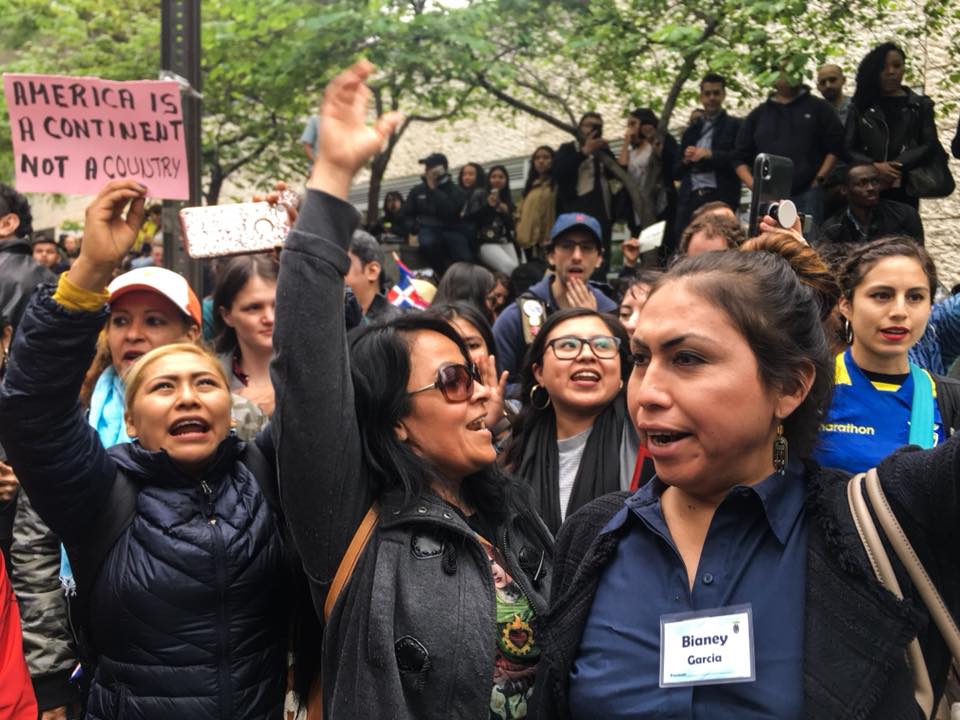