Our lives revolve around banks. It was not always so—near-permanent indebtedness as a fact of life is a relatively recent invention—but today, it is nearly impossible to do much of anything in our society without involving a bank.

This includes ending the American drug war, also a relatively recent invention, which banks are helping prolong by engaging in some very selective and transparently phony moralizing.

The good news is that they don’t need to do this. They could stop, or perhaps be pressured to stop by the public—and thereby convince the U.S. government to adapt and change its exploded policies, rather than the other way around, which isn’t happening.

It’s old news that big banks refuse to do business with state law-abiding cannabis businesses. Only 400 “financial institutions” of any kind offered cannabis retail businesses access to banking services last year—four percent of the roughly 11,000 banks in the country.

Banks reject loan applications, cancel leases, and close checking accounts on the grounds that the U.S. federal government—which insures and (in theory) regulates banks to prevent financial meltdowns like the one that happened a decade ago—will punish them if they don’t. And so, banks must do the right thing. This is a cop-out, replete with false piety and sanctimony.

Banks don’t care about rules, morals, or doing the right thing. This is not some anti-capitalist argument—it’s a factual observation. It is not in their nature, which is amoral. Look: Banks have laundered money for Mexican drug cartels, committed massive fraud, and triggered a mass redistribution of wealth by redistributing homes, from us, back to banks, after betting that complex financial instruments they created and sold to us would fail. Lying, cheating, stealing, funding murder, and fucking the poor—and this is all in the past decade. Most entities responsible for such a path of destruction would be punished, or at least reformed. Not banks, which are doing great, raking in record profits.

In a way, you can’t blame banks, for-profit corporations run by a board of shareholders, all of whom are there to ensure their investments make gains. This is their amoral nature. They “care” about making money. Beyond losing the money they’ve loaned out at a profitable rate, the risk for a bank lies in regulators stepping in and punishing them.

This means more banks should start taking marijuana accounts, because it would mean a lot of cash money. The excuse that the federal government will automatically punish them in some way for doing so is demonstrably, factually bogus.

It is possible that the federal government will shut banks down if they start accepting business accounts involved with marijuana, just as it’s possible for the federal government to start shutting down the entire country’s legal marijuana economy tomorrow. This has been within Jeff Sessions’ stated powers for more than a year. You will notice they are not doing this, because it is a phenomenally bad idea. Deploying government forces to end the weed industry would cause real chaos and disruption. It would be bad for business.

Imagine if Bank of America started taking cannabis accounts, with encouragement from Goldman Sachs. Now imagine Washington shutting them down. Only the latter part of this notion is absurd.

You will recall all the taxpayer money—our money, the money taken from the people whose multigenerational wealth the banks repossessed—given to banks to save them, because they were “too big to fail.” Any logical being looking at this situation from the outside would conclude, rightly, that banks, big banks, wield enormous power.

And of course they do. Banks have suffered some consequences for rigging shitty mortgages, bankrolling murderous gangsters, and engaging in other reprehensible behavior, defensible only in the amoral pursuit of profit.

You will also notice they are still around and still doing business, in much the same way as before. Financial institutions’ sphere of influence includes our lawmakers and, if you believe in the theory of regulatory capture, the regulators at the government who are supposed to punish bad banks so that they don’t cause havoc for the sake of yields. Again, this is not some fringe crackpot theory—this is a widely held belief, with ample data to support it. If banks did this, they would push the issue in Congress, rather than the other way around.

The question then becomes why banks, which can set agendas and escape severe penalties in most circumstances, and which have committed fraud and set working people back generations with their gambling losses, insist that setting up a checking account for a weed dispensary is a bridge too far.

It is possible the Securities and Exchange Commission is allowing banks access to these funds to which we are not privy—just as it is possible for the Justice Department to seize the tax dollars derived from marijuana sales sitting in state treasuries. They will not dare do this, for the same reason the IRS just gleefully accepted tax returns from businesses and people who buy and sell marijuana. Look at all the money there is! Banks, some of it could be yours—yours to loan out, yours to play with. You could be the first bank to do this—you could beat the shit out of your competitors! You could do this. You don’t even need to discover your scruples. 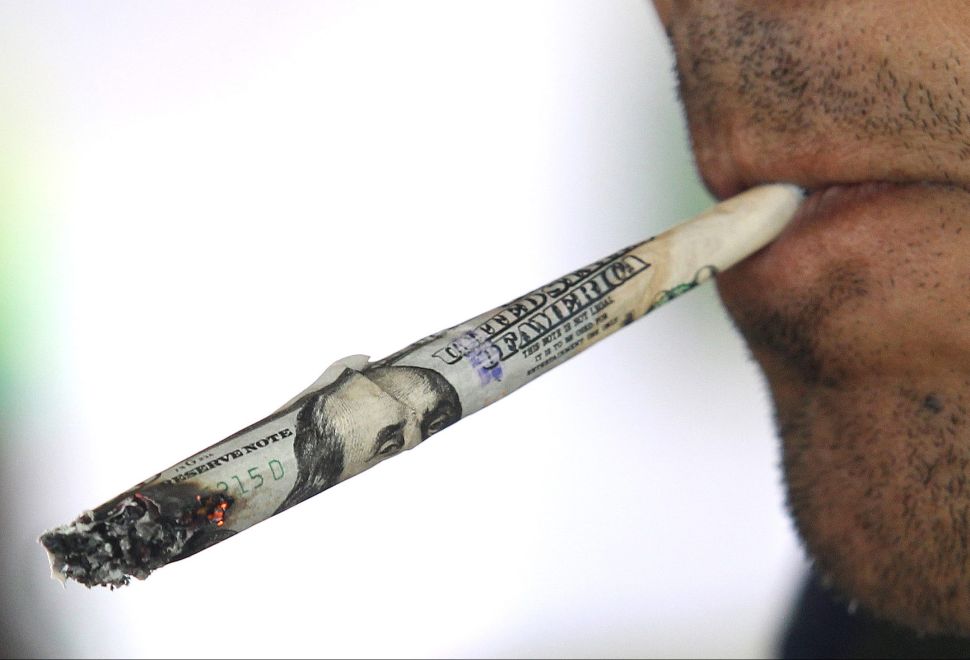