In a roughly 30-minute long chit-chat with reporters in their room at City Hall, Mayor Bill de Blasio accused the media of not covering him and his administration fairly—and said that reporters’ coverage is heavily influenced by the ownership of their publications.

On Thursday morning, City Hall released 4,245 emails between de Blasio and outside advisers he called “agents of the city” after a three-year long fight with NY1 and The New York Post which resulted in the two outlets winning a lawsuit against the mayor seeking the release of the emails.

During his weekly “Ask the Mayor” segment with WNYC’s Brian Lehrer, de Blasio went on a rant against mainstream media outlets, saying that there is a “problem” with those outlets and that corporate media is “based on selling things” and that it “leads to distortions.” He also called the tabloid culture “harmful to New York City” and dismissed comparisons between himself and President Donald Trump, who frequently refers to media outlet’s reporting as “fake news” and “dishonest.”

When he arrived at Room 9 in City Hall to talk to reporters, the situation quickly heated up. When a reporter asked the mayor about his complaints over the way that reporters cover him and his administration and why he is not used to it given that he’s had previous elected positions, de Blasio claimed that the media’s dynamic and focus has changed.

“I come from a family of journalists and some of this is my frustration and my pain over what I hoped for versus what I experienced, and that is very personal,” he told reporters in Room 9 at City Hall, where City Hall reporters work. “[I told myself], ‘I’m gonna do something different, I think it is gonna be received differently, I think it’s gonna be a different experience.’ I have not seen what I hoped for.”

He noted that his brothers and his parents were journalists “at one point or another in their life,” describing journalism as a “very rich tradition in the family.”  He said he was brought up with the Edward R. Murrow worldview of journalists “actually helping to save the country and protect democracy,” referring to the TV news broadcaster and war correspondent.

“I have felt too often that we were trying to do something earnest and decent and it was not given its due—not that it’s supposed to be Vladimir Putin kind of coverage… and that hasn’t been my experience,” de Blasio continued. “That’s the frustrating part for me. But, by the way, I also know some of that’s gotta be me. I must be doing something wrong. Some of that’s on my team. But some of that has to be the media also.”

Indeed, he admitted that he has to work on his messaging.

“I’ve said it plenty of times: I’ve gotta figure out how to communicate my message more clearly,” de Blasio added. “We’ve achieved all these things and somehow the media does not pick them up very often. We gotta do something different… and we also have to go directly to people.”

And when asked if the disconnect between himself and the media is partly due to the fact that he cut back on press conferences in which he takes off-topic questions—questions unrelated to the subject of the press conference the mayor is holding—he argued it is “absolutely the other way around.” He claimed that his administration started out with “an immense amount of access” and that reporters did not “create a balanced dynamic.”

“Everyone here wants immediate answers on every topic you bring up and I understand that,” the mayor contended. “There’s no way when you’re running a government you can get a perfect answer to everything in a matter of hours. And then it brings its own slippery slope. So I think what we’ve done… we actually run the place first, that’s the first obligation.”

The tense chat also featured a testy exchange between de Blasio and Bloomberg News City Hall reporter Henry Goldman, who expressed frustration with the mayor for smearing a story he wrote in 2014 about the mayor’s first budget having an unexpected $4 billion surplus ahead of labor talks with unions.

He called the mayor’s analysis of corporate media “incorrect” and “hurtful.”

.@hgoldman77 is coming for @NYCMayor over his analysis of corporate media 🔥🔥🔥 pic.twitter.com/t9XoSAcHbn

De Blasio, for his part, dismissed his complaint.

“I’m sorry dude, sorry my friend,” de Blasio shot back, saying that there is “absolutely” bias in the media based on media ownership. “If you think we’re naive enough to believe your media ownership does not affect the coverage and the editorial line of newspapers and any other media outlet, give me a break. Look what’s happening with Sinclair, look at what has happened forever with News Corp. Common guys.”

He called for more “robust” nonprofit media, pointing to public radio and calling The Guardian a “tremendously positive example.” He also praised The Root, a digital magazine that “provides thought-provoking commentary and news from a variety of black perspectives.”

“I think the great news about the digital age is that there are more and more outlets with different worldview,” the mayor continued. “The Root‘s a great example. You read stuff in The Root you never would have read [anywhere else]. It’s given a whole other perspective. This is the thing that gives me hope, that there’s gonna be a diversity of outlets going forward.”

When the press conference ended after nearly 30 minutes, Goldman turned the table on de Blasio.

“Who owns you?” he shouted as the mayor fled the room.

This wasn’t the first time that the mayor clashed with reporters in such a dramatic way.

In 2016, he refused to take questions from New York Post City Hall bureau chief Yoav Gonen—one of two reporters who filed the “agents of the city” lawsuit—over a Post story about the de Blasio administration hiring 264 special assistants which called a commissioner a “crony.” Gonen did not write the story.

City Hall Reporters Put the Mayor in His Place

Journalists took to social media to respond to the mayor’s criticisms.

Here are some stories from NYC's corporate media, defenders of the status-quo who don't care about ordinary people, as @NYCMayor sees it. 1. "NYCHA tenant and mom of boy with high blood-lead levels furious Mayor de Blasio concealed violations," https://t.co/Kcrjg1pc7x

New York City has 111,000+ homeless kids in its public schools. If the mayor wants to talk about substance and changing the status quo, he could focus on that fact as much as reporters have.

Some politicians seemed to take issue with the mayor’s comments on the media as well. Comptroller Scott Stringer did not outright name the mayor, but it was clear he was talking about him.

The media's job is to hold government accountable. Elected officials must face the music, even when we don't like the tune.

So What Was in the Emails?

The emails included guidelines from a de Blasio aide on how to address questions about former New York senator and Secretary of State Hillary Clinton, who at that point had not yet announced her presidential bid, and the mayor calling the media “pitiful” after they reported on the fact that he was at the gym as a firefighter was shot while responding to a house fire on Staten Island.

He also expressed excitement over a 2015 Observer article on what he has to gain in publicly blasting Gov. Andrew Cuomo. Other highlights included First Lady Chirlane McCray suggesting that City Hall come up with its own clickbait content and a de Blasio aide suggesting that the mayor “just rip his face off” in response to President Donald Trump calling him the “single worst mayor in the history of New York City.” The mayor’s spokesman insisted there were no violent intentions behind the comment.

Gonen noted that de Blasio’s staffers seem to spend a lot of time worrying about his image and talking about the need to portray an image of authenticity and reliability and wondered if that is the best use of their time. The mayor defended such behavior.

“Every public figure thinks about how people perceive them,” the mayor maintained. “The difference is we were given unfortunately inaccurate instructions and believed what we were [doing was OK]. We’re providing it [emails] to you now, but those same conversations happen every day in every office in America.” 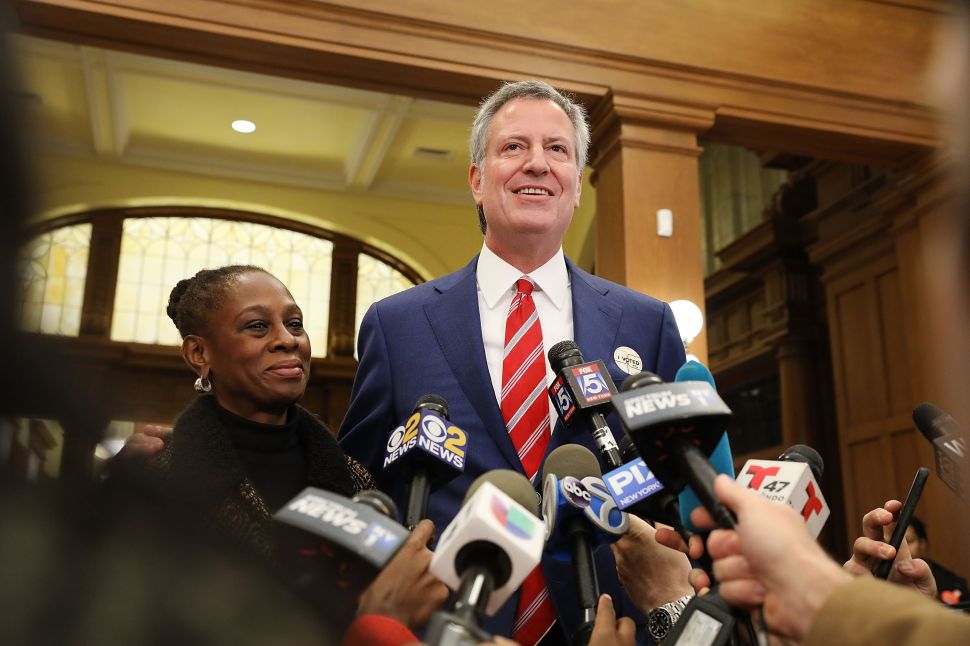