“Build the wall” was the Trump crowd’s rallying cry during his campaign. To further rile up his supporters, Trump would retort, “And Mexico is going to pay for it.” But over a year and a half later, it appears that Mexico paying for the wall was nothing but a pipe dream and a marketing scheme to mobilize immigration hardliners. Worse yet for Trump, of the $33 billion he requested to secure the border, Congress has only authorized $1.6 billion, and that’s just for barrier re-enforcements.

However, China, another Trump nemesis, may not be able to avoid funding the president’s policies. They will end up paying the U.S. Navy to build and maintain the very fleet of warships and planes that’s opposing them in the South China Sea.

The U.S. and China are on confrontational footing in the South China Sea. China’s seizure of the Scarborough Shoal and its claim to the Spratly and Paracel Islands has triggered a firm response from the U.S. As outlined in a National Defense Strategy paper, freedom of the seas is an essential part of the America Navy’s plan to defend the right to navigate anywhere in the area. The U.S. Navy is thus conducting regular “Freedom of Navigation” operations in and around the disputed waters.

The response from the Chinese military? Chinese foreign military spokesman Geng Shuang said, “Under the pretext of freedom of navigation the U.S. has trespassed in China’s waters and China has dispatched military vessels and fighter planes in response.”

Needless to say, China does not intend to back down. This territorial claim, known as the “Nine Dash Line,” has also provoked disputes with Vietnam, The Philippines, and others. On April 13th, military fatigue clad Chinese President Xi Jinping appeared on a battleship to witness a live show of strength intended to intimidate Taiwan. With over 48 warships and 76 fighter jets deployed in the exercise, this operation was the largest display of Chinese naval military might in history.

Seth Cropsey, former deputy undersecretary of the U.S. Navy, has warned of an imminent conflict in the bitterly disputed South China Sea. And U.S. Admiral Philip S. Davidson said, “In short, China is now capable of controlling the South China Sea in all scenarios short of war with the United States.”

To defend their claim to the area, China is spending its U.S. trade surplus dollars. Yes, they are buying up New York City hotels and office buildings, pork producers and technology companies, but they are also determined to control the seas and will spend whatever it takes to accomplish that end. China’s South China Sea policy is like our 1823 Monroe Doctrine.

Determined to not be caught unprepared again as they were at Pearl Harbor, the U.S.’ new budget has authorized increased military spending. And because of years of decline, the increase is vast. The Navy will get an annual $48.8 billion to build new ships and fighter jets.

And China will help finance this build up.

In the 2019 budget, which has been passed and signed, the U.S. will need to borrow a minimum of a trillion dollars a year. And as of 2018, China holds $1.2 trillion of U.S. Treasury debt, the largest single holder of that debt.

As the U.S. issues more debt, interest rates will rise and the higher yields will be more attractive to Chinese investors.

On the trade front, because the budget and the resulting deficits are stimulative, most economists are predicting a rise in U.S. purchases of Chinese products, further increasing the trade deficit. If that happens, China may recycle these new dollars into even more Treasury holdings.

In essence, China is lending us money to rebuild our navy to oppose them.

This shows how intertwined the global economy is. China needs exports to finance its military ambitions. The U.S. needs to borrow to do the same. China is a key creditor. Neither can cut the other off; to do so would cause economic collapse for both countries. So, the cycle continues. American consumers bought $375 billion more Chinese goods than Chinese consumers bought American goods, and in return China buys trillions of dollars of our debt.

The logical thing to do would be to negotiate a treaty on the South China Sea, one that de-escalates the naval build-up threatening to explode into war.

But until rational minds prevail, America and China will head toward more heated confrontation. Those new and improved U.S. naval vessels facing the Chinese in the South China Sea should have “Financed by China” inscribed on their underside. Clearly the Chinese did not get as good a deal as Mexico. 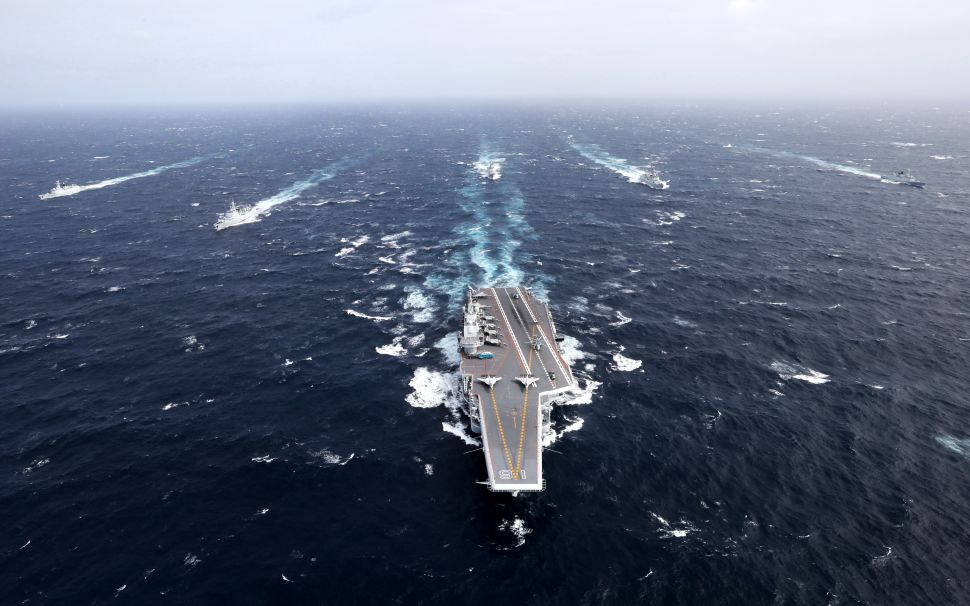