Diversity and inclusion in tech is a huge topic, so it’s fitting that it inspired one of the largest panels at the Collision conference in New Orleans.

Five founders, CEOs and venture capitalists of varying races and genders sat down with Fortune deputy digital editor Kristen Bellstrom to discuss what tech can do better.

The answer, put simply, is a lot.

Bellstrom started the conversation by asking the panel to rate the tech industry’s response to these issues thus far.

Two gave a B-, one gave a D-, one slapped the industry with an F and one rated it I (incomplete).

One reason for these low grades is the funding gap among startup founders.

Only 10 percent of entrepreneurs and VCs are women, and just three percent of venture capital money goes to women.

Some of the older women on the panel said they didn’t notice this disparity early in their careers, but it had become more pronounced lately.

“When I was pitching 20 years ago, I was only pitching white men,” venture capitalist Jenny Lefcourt said. “I was so goal oriented that I didn’t care, and it didn’t feel strange at all. But now the disparity is too enormous to ignore.”

The statistics are even worse for female founders of color—they only receive 0.2 percent of VC money.

One of that small number is Denise Hamilton, founder and CEO of digital learning platform WatchHerWork. She urged funders to look outside the box for new ideas.

She also urged VCs to stay out of geographic or ageist bubbles. Hamilton used herself as an example: as a 47-year-old woman living in Houston, she didn’t have the resources of Silicon Valley or New York City at her disposal and was forced to seek out alternative funding models.

But of course, white men still mostly hold the purse strings. And one of them was on the panel: Crunchbase CEO Jager McConnell.

“Most tech companies are full of a lot of people that look just like me,” he said. “That’s not great, and it leads to a monotone culture.”

It can also lead to a toxic workplace, as the #MeToo movement has illustrated. But while harassment may seem like a fact of life in many industries, it’s easy for tech honchos to avoid it.

“My secret to success is ‘Don’t be creepy and you’re fine,'” McConnell said.

“This is a really avoidable problem,” Hamilton added.

If a male superior does mansplain to a female, however, it’s important to stand up firmly against it.

“Don’t take the seat in the back, advocate for yourself,” said Manon DeFelice, founder and CEO of Inkwell, which matches workers who need flexible scheduling with the right employers.

But while companies need to tackle diversity and cultural shifts, these issues can’t interfere with day-to-day business.

“The pendulum can swing too far the other way,” Lefcourt warned. “If you’re going to attack anything that isn’t perfect, you’re not going to solve the problem.”

That’s less of a problem in newer companies, however, which have come of age in a more melting pot culture.

So given the myriad of issues in tech, is it possible for the industry to change?

“Be open to flexible and alternative work schedules,” DeFelice said.

“Shore up women and founders of color to see a change,” Hamilton said. “Put your money where your mouth is.”

“People in privileged groups should elevate people who aren’t,” McConnell said. “If you’re invited to a conference without diverse speakers, don’t go.”

More than one-third of Collision speakers were women, and 42 percent of attendees were women—so this conference definitely had the right idea.

Let’s hope the rest of the industry follows suit. 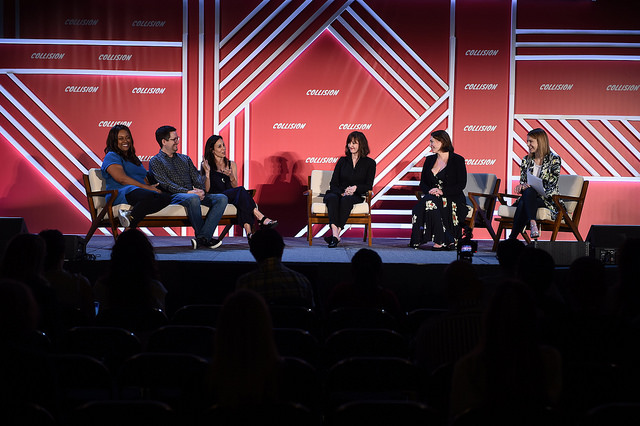