Now that disgraced former New York Attorney General Eric Schneiderman is out following physical abuse allegations by four women, what does that mean for his nationwide coalition work against the administration of President Donald Trump, as well as his ongoing investigations and lawsuits?

Schneiderman, 63—a powerful Democrat who was first elected as state AG  in 2011 and filed lawsuits against Trump and a sexual harassment lawsuit against disgraced Hollywood executive Harvey Weinstein—resigned on May 7.

He was one of the leading Democrats taking on Trump, leading coalitions of Democratic state AGs combatting Trump on issues like immigration, health care and the environment—and had taken legal or administrative actions against him and the congressional GOP 100 times since Trump took office.

And he positioned himself as a leader in the #MeToo movement. He was in the middle of investigating Manhattan District Attorney Cyrus Vance’s handling of sexual misconduct allegations against Weinstein. He also filed a civil rights lawsuit against Weinstein, his brother and the Weinstein Co.

G. Oliver Koppell, who was AG for one year in the 1990s, told Observer that Schneiderman’s resignation will “somewhat set back” some of his efforts.

“A new person who comes in, whoever that person is, is going to have to orient himself or herself and have to decide how they wanna move ahead on this because there are a lot judgment calls that have to be made in connection with the ongoing cases that the attorney general’s office is handling,” Koppell said.

He said that acting Attorney General Barbara Underwood is experienced, calling her “very smart” and “very capable as a lawyer” but said he would like to learn more about her judicial and political viewpoints, noting that when people work for someone who is ultimately the boss, “you’ve gotta reflect the boss’s outlook.”

Underwood, 73, has 50 years of experience, including serving as acting U.S. solicitor general and principal deputy solicitor general. She has argued 20 cases before the U.S. Supreme Court as well as many cases in the state and federal courts of appeal.

She has said that she will continue Schneiderman’s work, including supporting immigrants and fighting Trump’s Muslim travel bans and environmental policies.

Amy Spitalnick, press secretary for the AG’s office, told Observer the office’s work is “continuing without interruption,” including the many multi-state lawsuits and other legal challenges it leads.

“In the last week alone, we’ve already led a national coalition in a Clean Power Plan filing, secured a $151 million payment from the federal government as part of our lawsuit over Essential Plan health care funding, double-downed on the net neutrality lawsuit we lead, announced that we’ll be joining a suit over the federal government’s failure to enforce the Fair Housing Act, and called on Congress to adequately fund the Legal Services Corporation,” Spitalnick said.

She noted that does not include all of the office’s other work, pointing to the guilty pleas the office secured in a major organized crime case last week, among other achievements.

“On Tuesday and every day after, our staff of 1,800 dedicated public servants were back at it,” Spitalnick continued.

Cuomo appointed Nassau County District Attorney Madeline Singas as the special prosecutor to conduct the probe into the allegations against Schneiderman given that the office is probing Vance.

Queens Councilman Rory Lancman, chairman of the Council’s Committee on the Justice System, anticipates Schneiderman’s resignation will have a “very significant impact.”

“That person [who replaces Schneiderman] needs to listen to the public, channel the public’s interests and priorities and operate in not just the legal sphere but in the political sphere,” Lancman said. “So for example, working with other attorneys general around the county, building legal and political coalitions for the actions that the office is taking, representing the office and its views to the public and marshaling public opinion behind the positions that the office is taking. All of those things are very,  very important to the attorney general as structured in New York state.”

And he wondered whether the office now has the capacity to take the lead and represent New Yorkers the way they expect on issues of fighting the Trump administration’s environmental regulations, the Muslim travel ban, laws targeting so-called “sanctuary cities” for undocumented immigrants and assaults on voting rights.

“There’s probably not a more qualified capable lawyer in the country than Barbara Underwood,” Lancman continued. “That’s different from exercising the judgment and making the choices and being the public face of the legal interests for the people of the state of New York.”

What Exactly Does the New York Attorney General Do?

The AG has two roles as the head of the Department of Law: the “People’s Lawyer” and the state’s chief legal officer, according to the official website for the AG’s office.

As the “People’s Lawyer,” the AG is the protector of New Yorkers’ legal rights, as well as the state’s organizations and natural resources. And as the chief legal officer, the AG counsels state government’s executive branch and defends actions and proceedings on its behalf.

And in 2015, Cuomo signed an executive order making Schneiderman the special prosecutor when law enforcement kills a civilian under questionable circumstances.

He said the AG’s first and primary responsibility is to represent and defend the state but that it came to also be known as “the People’s Lawyer” under the late Louis Lefkowitz, a Republican who served as AG from 1957 through 1978.

But the phenomenon of AG coalitions occurred more so under Robert Abrams, a Democrat who was state AG from 1979 to 1993, Feldman explained.

“Lefkowitz certainly dramatically changed the office of making it way more aggressive and basically instead of just almost entirely defensive, became aggressive,” he said. “But in terms of sort of between national coalitions of state AGs… I think that happened really more after Lefkowitz.”

He argued there is no reason to believe that any major investigation would halt under Underwood and noted that she was Schneiderman’s solicitor general so there would not be “any dramatic shift,” calling her an “outstandingly effective” attorney.

But he said he supposes one could wonder if Underwood might be as “publicly aggressive” as Schneiderman has been.

“If she wants to demand that degree of public attention then she’s perfectly capable of doing it in my judgment,” Feldman added. “If she can accomplish the same goals perhaps with a less aggressive media stance, then she would do that I suppose.”

Bennett Liebman, a government lawyer-in-residence at Albany Law School’s Government Law Center, added Spitzer was the “sheriff of Wall Street” and that when Cuomo was AG, he focused on “government wrongdoing.”

“I don’t think there’s gonna be an immediate impact,” Liebman said, noting the staffers are focused on doing their work. “I think the acting Attorney General Barbara Underwood has certainly said that she will continue the policies of Eric Schneiderman, and there’s no reason to believe that that will change one iota.”

It’s All Gonna Be OK

Kristen Clarke, president and executive director of the Lawyers’ Committee for Civil Rights Under Law, who formerly served as a civil rights bureau chief for the office, anticipates that the staffers will continue the work.

“The attorney general no doubt occupies a critical role, but the attorneys inside that office are bright, hardworking and dedicated people who commit each day to investigating matters that come to the office’s attention and drive the litigation and develop the strategy,” Clarke said.

She said Underwood is a “brilliant legal mind” and a “strong leader” and takes “great comfort” in knowing she is heading the office.

“Look, AG Schneiderman is a very talented lawyer,” Racine said. “There’s no doubt about that. But in every regard, the work that the Democratic AGs have been doing over the last nearly 18 months now… has been a collaborative and coordinated effort with no single AG carried a disproportionate load of our collective work and so in a real way, yes, we lose a talented lawyer but the room is leader-ful not leader-less and the work will continue.”

And he called Underwood one of the United States’ “preeminent Supreme Court practitioners and leaders in the law.”

“The level of participation from the New York office has continued,” Racine maintained.

“The allegations are troubling and disturbing,” Healey said. “I’ll tell you this, though: the work of AG’s offices in New York and around the country will go on.”

And when asked whether she anticipates any slowdown in the legal work, she said the work will continue.

“The work of the attorney general’s office is really reflected in our teams, in our lawyers, in our investigators, in our staff,” Healey continued.

Malik Wright, president of the Manhattan Young Democrats—who worked as the deputy director of operations for the AG’s office from 2015 to 2016—says Schneiderman had national recognition but the work will go on.

Sonia Ossorio, president of the New York City and state chapters of the National Organization for Women—groups that backed him in the past—expressed similar sentiments.

“We’re gonna continue to fight the Trump agenda for women, so we’re looking towards who is going to be the next attorney general,” Ossorio said.

Andrea Miller, president of the National Institute for Reproductive Health, pointed to lawsuits the office filed to ensure access to reproductive health clinics and the Comprehensive Contraception Coverage Act.

“Frankly, the New York attorney general’s an essential partner and player in trying to mitigate some of the damage and the harm and the attacks on a whole host of people across the country, whether that be on reproductive rights, on women’s equality, immigrants, the LGBTQ community, communities of color,” Miller said. “It’s a really critical office and we hope and expect that it will continue to play that role.”

Miller has “no doubt” Underwood is continuing the office’s work and said it would be an “added tragedy to these circumstances” if someone were to capitalize on the latest event to roll back progress.

Judy Harris Kluger, executive director of Sanctuary for Families, who also served as a state judge for 25 years, told Observer that Schneiderman fought against sexual assault victims being charged for the processing of rape kits.

“I am not at all concerned about the work that we do as advocates and service providers for victims of gender violence because the leadership now is someone who I have known for many years,” Kluger said. “I think she [Underwood] will continue to work with organizations like ours and she’s highly qualified and competent and I have no doubt that our work together with her office will continue.”

Queens Councilman Jimmy Van Bramer said the resistance is “bigger than any one person.”

“I think the issues that we care about as progressives remain and the work remains and there are a lot of people ready, willing and able to engage in those fights,” Van Bramer said. 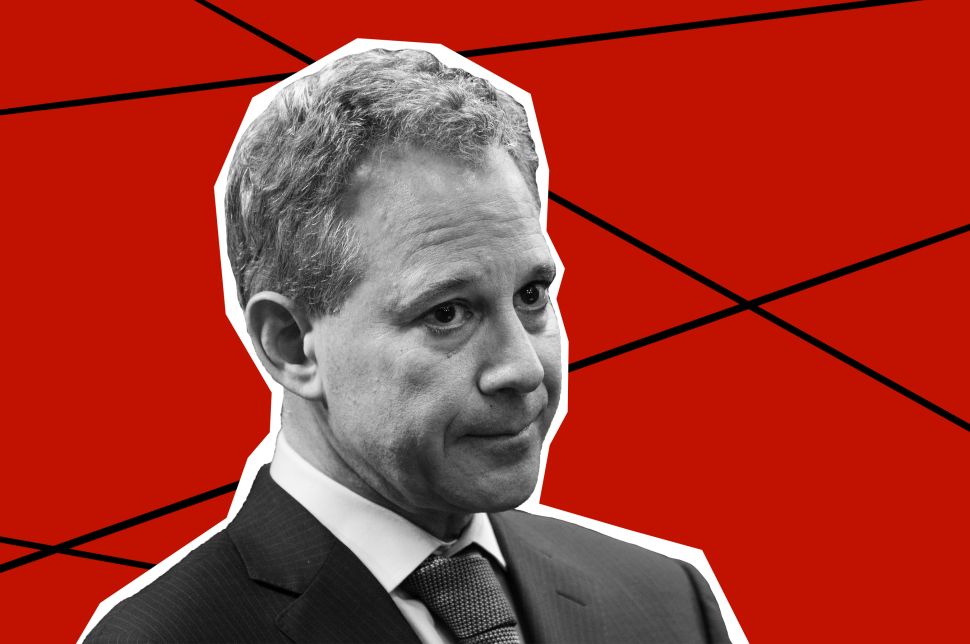