The crash of a Polish Air Force Tu-154 airliner near the Russian city of Smolensk on April 10, 2010 stands as the most momentous air disaster in modern times. Although other crashes have claimed more victims—the death toll at Smolensk came to 96, all those aboard the doomed ship plus seven crew—those lost were the elite of Poland’s government. Among the dead were President Lech Kaczyński and his wife, much of the president’s staff, 18 parliamentarians, 10 generals and admirals representing Poland’s top military leadership, and many other political notables. The disaster decapitated Warsaw.

To make matters even more painful, President Kaczyński and his entourage died en route to a commemoration at Katyń, the forest in western Russia where, in the spring of 1940, Stalin’s secret police murdered 22,000 Polish military officers captured by the Soviets when they carved up Poland with Adolf Hitler the previous September. Here Moscow murdered Poland’s elite. Covered up by the Kremlin until after the Cold War (with help from the incurious West), Katyń lingers as an unhealed wound in the Polish psyche; the sudden death of so much of the country’s leadership on the way to that site of national martyrdom was too much for some Poles to bear.

From the outset, right-wing allies of the fallen president smelled a rat—a Russian rat, that is. Poles know their neighbor well, and Kaczyński had no illusions about Vladimir Putin’s thuggish regime. It seemed beyond suspicious that Poland’s government died in a disaster on Russian soil—particularly when the Kremlin is led by a man who came of age in the KGB, the very same people who executed and covered up the Katyń massacre.

However, investigators determined that the crash occurred due to a chain of human errors and could be explained without nefarious mystery. Russian and Polish official inquiries into the disaster, both published in 2011, were not in complete agreement, yet they broadly concurred that pilot error was to blame. Both reports asserted that Smolensk, a military airfield lacking modern civil navigation aids, was shrouded in dense fog that fateful morning and, on the approach, the pilot (who was overtaxed by managing the landing and radio contact with the Smolensk tower simultaneously) misjudged the glide slope and flew the Tu-154 into a forest a half-mile short of the runway. After hitting a birch tree with its left wing, the aircraft spun and flipped on its back, hitting the ground with sufficient force to kill all passengers on impact.

Most investigators concurred with the official assessments (in 2013, the Canadian TV show Mayday ran an episode explaining the crash), yet Russian conduct surrounding the disaster raised doubts in many minds. Moscow promised full cooperation but did not deliver. Eight years later, the crash wreckage has not been handed over to Poland, making proper investigation by Warsaw impossible. Worse, dead bodies were robbed of possessions while under guard by the Russian Federal Security Service (FSB), while the FSB reportedly stole NATO secrets, including classified communications protocols, from the corpses of Polish military officers.

Even more embarrassingly, the Kremlin was remarkably slipshod in its handling of the dead. Sent home in sealed coffins, many of the bodies had been swapped or misidentified. In 24 cases of reexamination in 2016, half of the coffins opened contained the wrong remains. Even the coffin of President Kaczyński included the remains of two other victims. Such carelessness inevitably led to questions about what else the Russians had mishandled—or worse.

For many Poles, this all pointed to a conspiracy, a secret Russian hand behind the disaster. Books and even movies appeared that posited various versions of what critics have dismissed as “conspiracy theory.” When the right-wing Law and Justice party came to power in late 2015, guided by Jarosław Kaczyński, the fallen president’s identical twin brother, it pledged to get to the bottom of the Smolensk mystery. Defense Minister Antoni Macierewicz took the lead, and denounced the previous government’s account of the disaster as a whitewash, secretly coordinated with Moscow. Macierewicz promised a fresh look at Smolensk, based on new evidence that he insisted had been suppressed by the previous, center-right Polish government.

As Macierewicz told me a few months ago of Smolensk, “What a great shock this was, for everyone in Poland, no matter their views on that tragedy.” He then promised “our report on the tragedy, which will reveal how it happened. This is an international investigation. It is overdue.” The eighth anniversary of the disaster came last month, but by that time Macierewicz was no longer Warsaw’s defense minister. However, the report (in synopsis and full formats) appeared last month, as promised, and charged that the disaster was caused by multiple explosions aboard the Tu-154 prior to its collision with the ground. This, in other words, was no accident—and the Russians were behind it.

Although this report has predictably been dismissed by opponents as—you guessed it—a “conspiracy theory,” it merits examination. For one, the report involved Frank Taylor, a veteran British air crash investigator of considerable renown. For decades, Taylor has unraveled aviation mysteries at home and abroad, including the 1988 Lockerbie terrorist attack on Pan Am 103. Notably, Taylor led the reexamination of the 1980 Ustica disaster, the loss of an Italian DC-9 that claimed 81 lives. Multiple Italian investigations concluded that the airliner was shot down in a secret air battle over the Mediterranean between NATO and Libya. Taylor determined that there was zero basis for this scenario and instead found clear evidence of a bomb planted on the doomed DC-9—a scientifically sound verdict that was ignored in Rome for political reasons (this depressing saga is the subject of a recent Mayday episode).

In other words, Taylor is no conspiracy theorist, and his deeply troubling comments on Smolensk deserve to be taken seriously. This February, he dismissed the official verdict of the Russian and Polish inquiries as a politically convenient fantasy, stating, “There is no doubt there were explosions on board before the aircraft hit the ground.” In a subsequent interview, Taylor explained, “There is strong evidence that a few seconds later the door on the left side of the fuselage, just forward of the wing, was blown out and driven hard into the ground by another explosion in the fuselage. He added that the Kremlin investigation was a fraud: “Russian politicians took over the investigation, preventing the professional investigator from taking control of the accident site, from completing the full investigation, including a full reconstruction of the wreckage, and from writing the final accident report.”

Given Taylor’s status as a respected air crash investigator, the Smolensk disaster needs thorough reinvestigation by experienced third parties, neither Polish nor Russian. In truth, Western intelligence has had grave doubts about the “official” version of Smolensk from the outset. A senior Polish security official bluntly informed me, “Of course Warsaw knew the truth,” meaning the previous government sought to keep peace with Putin by going along with the Russian version of the disaster. He continued, “What were they supposed to do? Do you think NATO would really go to war with Russia for Poland over Smolensk?”

There, indeed, is the rub. American intelligence officials have suggested a similar story to me—that U.S. spies, like Warsaw, always knew the Russians were lying about the crash. German intelligence seems to have known the sordid truth too. That there is something unpleasant lurking behind the 2011 investigations now looks highly likely. It once may have seemed fanciful to suggest that Putin would risk war by murdering Poland’s top leadership, but in the eight years since the crash, the Kremlin has stolen Crimea and invaded eastern Ukraine—not to mention it employed a military-grade nerve agent in England to silence its enemies. From today’s vantage point, a hidden, homicidal Russian hand behind Smolensk no longer appears implausible. Poland deserves the truth about what really happened on April 10, 2010. 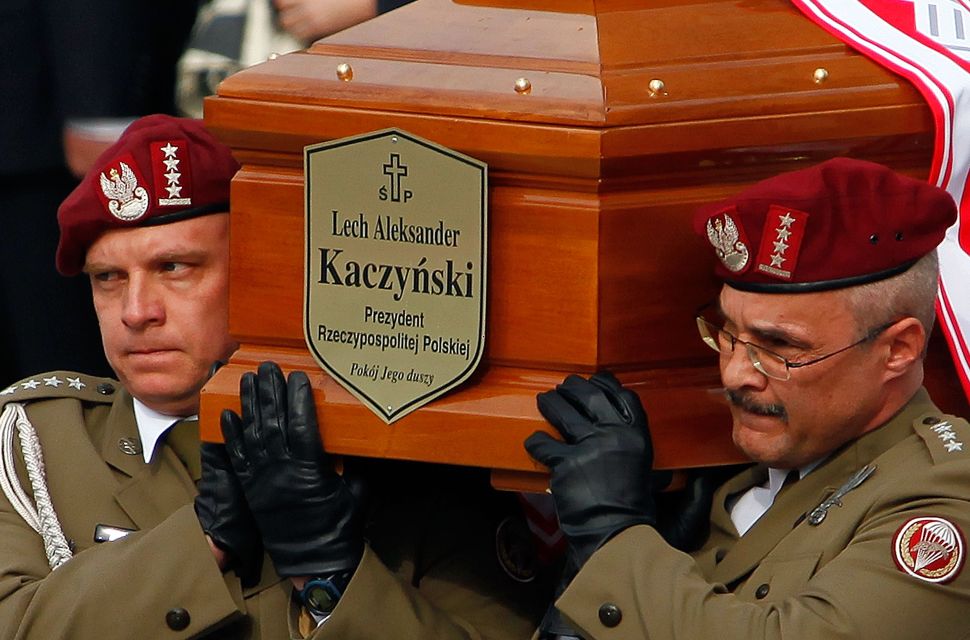