HBO’s Fahrenheit 451, starring Michael B. Jordan, Michael Shannon and Sofia Boutella, should not ben envied by other content creators. It is an impossible task to cram one of America’s most iconic classic novels into the space of a television movie. Had I the talent to actually make films rathers than just comment on them, I’d be wary of any such undertaking.

But writer/director Ramin Bahrani manages to pull it off relatively unscathed.

At HBO’s premiere party in New York City on Tuesday, he introduced the film by noting that we live in a time of “alternative truth and post-facts.”

From the opening credits, that stance is fully textured and expanded upon as symbolic imagery of burning literature, faux-news clippings and audio/visual snippets detail how humanity has sunken into this dystopia and what the current reality looks like.

It’s a tactic that is often employed for apocalyptic-esque genre fare, but composers Antony Partos and Matteo Zingales excellently score the intro with an unsettling tune that establishes a striking tone. It’s the sound and visual combination that make author Ray Bradbury’s world come to life quickly. I was in from the jump.

Bradbury’s own explanation of his book’s themes has shifted over the years.

At first, he argued that his novel was about the suppression of dissenting ideas (it was written in the McCarthy era, after all). Later, he said that Fahrenheit 451 was a warning about the threat of mass media reducing interest in literature and leading to a hedonisitc and illiterate society. Over the years, different interpretations revolving around censorship, political correctness, social media, social justice and the power of thought have emerged as well.

HBO’s adaptation does a good job of attacking all the major interpretations without becoming too muddled and contradictory. Glued together, the many explications and contributing factors feel like a comprehensive Instagram snapshot of the times we live in today. Social justice warriors decrying offensive material, short attentions spans lessning our intake of discourse, a collective lapse in thought development. They’re all in there, and reminded me of the famous George Carlin quote about the power of language.

These are fascinating ideas to wrestle with, each worthy of their own individual movie. However, at a brisk 100 minutes, Bahrani doesn’t have enough time to really dig into each with the intense focus afforded to the author. On that same note, the journey of Jordan’s protagonist, Guy Montag, from book-burning celebrity fireman to rebellious revolutionary feels rushed.

Jordan sells it with his customary combo of charisma and pathos, and you understand why he chooses the direction of his life that he does. You relate and feel for him because of the society he was born into and the brainwashing his generation has been subjected to.

But it would work even better if the flashbacks to his childhood and his growing relationship with Boutella’s Clarisse McClellan were unpacked a bit more: we know the what of his world because you’ve shown us, but let’s get even further into the why.

One particularly powerful moment taken right from the book forces Montag to confront the completely alien-to-him notion of dying for an ideal. To borrow a line from Ted Mosby, it is “hauntingly beautiful,” and you wish a greater chunk of screentime could be devoted to what it means for Montag, rather than it quickly inspiring him into action.

Fahrenheit 451 also raises a question that has become increasingly commo recently: How Trumpian should our entertainmnet get these days?

Shannon’s disillusioned Fire Chief Beatty motivates his men with calls to “burn for America again,” a clear mirror of Trump’s campaign slogan. In a time where the press seems to regularly be under attack and the president often openly debates revoking access to “fake news” outlets, Fahrenheit 451 is certainly relevant.

But should we allow these thought-provoking works to be relevant metaphors through implication, trusting that audiences are intelligent enough to draw the connection on their own? Or is the clarity of the point important to underline, thus making a definitive statement through art in the process?

Overall, HBO’s Fahrenheit 451 is a challenging watch in all the right ways and just a couple of the wrong ones. The breadth of the project leaves something unsaid and un-felt, truncated messages and quickened journeys. But the depth helps texture everything that is present and brings Ray Bradbury’s world to life before your eyes. 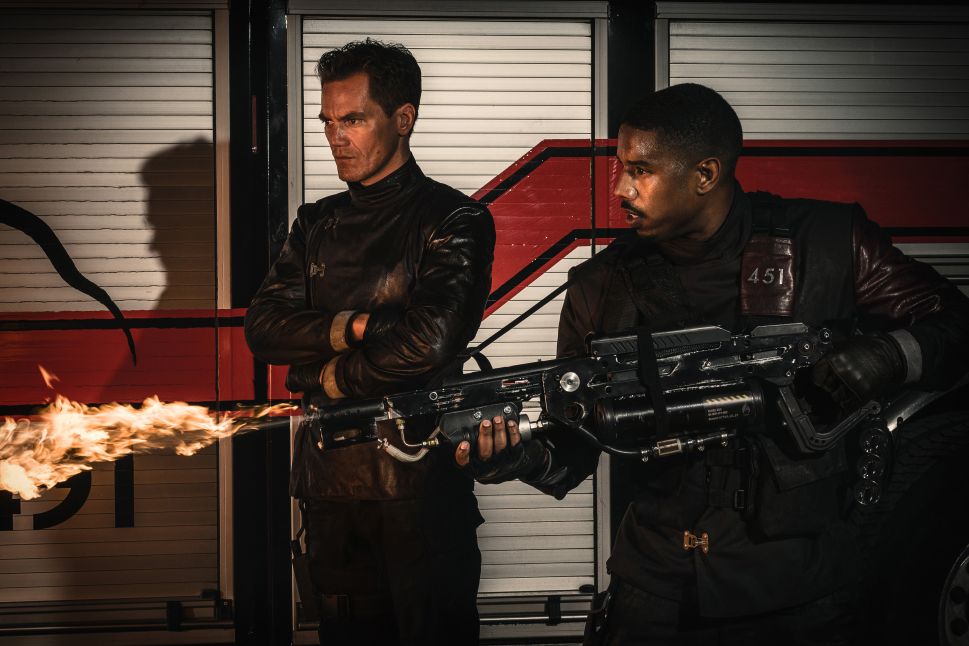