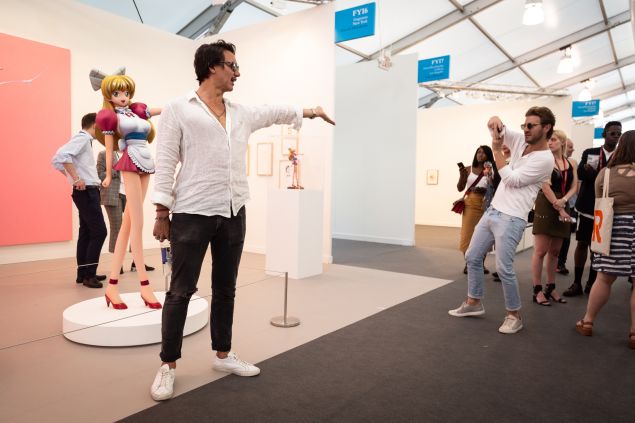 The ninth edition of Frieze New York has officially opened to the public and let me tell you, the major London-based art fair is on fire this year.

Not because there’s so much great art to see or because they’ve overhauled the layout for this first time in years…but because the venting was apparently installed incorrectly in said new layout. Timed with the first wave of summer weather hitting the city, the fair has turned into a literal hotbed for contemporary art. But in the quest to find the coolest booths, I came up empty-handed.

After announcing earlier this year that it would launch a Los Angeles edition of the fair in the fall of 2019, many wondered how Frieze would diversify between two major U.S. fairs. So it didn’t come as a surprise when Frieze NY opened this year boasting a bold new layout plan to prove it could do “fresh.” Designed by the London-based firm Universal Design studio, five interlocking tents house nearly 200 galleries divvied up between various curated sections such as Frame (for solo presentations by galleries new to the scene), and Spotlight (focusing on art from the 20th century). And while this probably took a lot of planning and effort, it also didn’t vastly change my experience of the fair. In fact, I forgot that it had been redesigned until I re-read the press release. 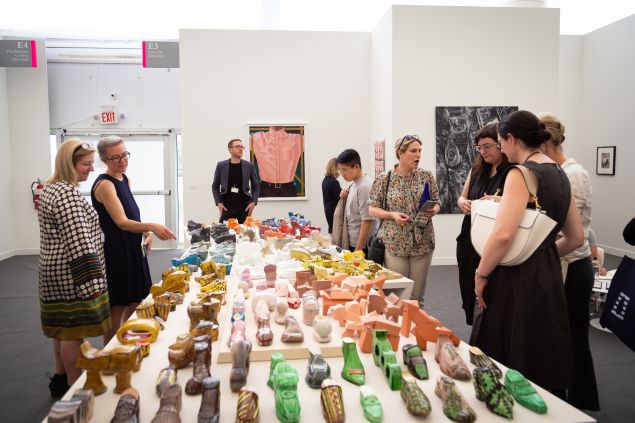 Maybe I hadn’t noticed the spiffed up floor plan due to the feverish haze surrounding me as I shuffled between the muggy tents, already sweat- and sun-drenched from my ferry ride to Randall’s Island. According to curator and director of New York’s Postmasters gallery, Kerry Doran, however, the fair was better for the redesign. “Compared to another big New York art fair like the Armory Show, which always feels a little bit like an inventory display, Frieze seems a little more fresh,” she said. This may have more to do with the quality and scope of the fairs themselves, though, than how they are laid out.

A lot of art fairs are trying out new exhibition layouts—just a few weeks ago, the Armory Show made a big to-do about their own retooled floor plan designed by Bade Stageberg Cox. And the specially curated sections these expanded designs usher in are de rigueur these days. What these additions represent, more than a fresh fair experience, is twofold. On the one hand, it’s essentially a greedy gesture by the companies that run them to entice exhibitors who pay big bucks to sell their wares with the promise of newness and improvement. On the other hand, they provide practical talking points for journalists suffering crushing fair fatigue (who no longer know what to say about the 75th fair they’ve been to in two years) so that the events still receive media coverage and therefore retain their relevance.

But with the endless international schedule of major art fairs like Frieze, Armory and Art Basel, and the countless small satellite fairs that pop up around them, it becomes more and more difficult to differentiate between them and the artwork they present, new layout or not. This is bad news for exhibitors who often pay hundreds of thousands of dollars a year to participate in art fairs in order to get their artists seen, which in turn prompts them to often bring the brightest and biggest works they’ve got in hopes that they can snag some free marketing via Instagram popularity and “best booth” roundups—something I’ve been guilty of writing more than once. 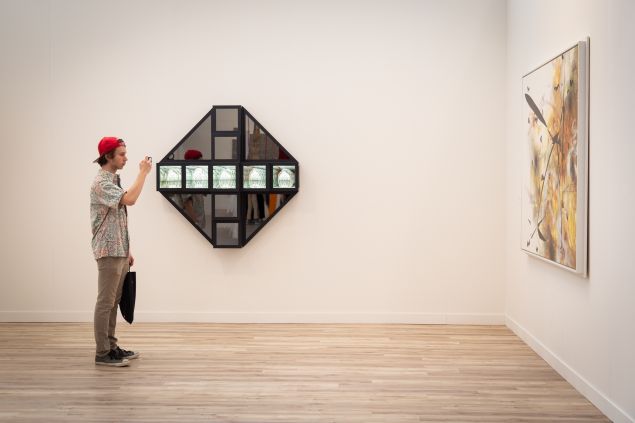 A fair-goer takes a photo at Frieze NY 2018. Kaitlyn Flannagan for Observer

That’s not to say that dealers aren’t bringing quality work, it’s just that the stakes of gallery survival in this economy are ever higher, and fair-goer attention spans are increasingly lower as the events further proliferate and professionalize. This is probably why photographable work that might be popular to share is prime fodder for gallerists.

But shares don’t equal dollars. “I can’t feed the children with likes,” said David Hoyland of London’s Seventeen gallery, who has participated in Frieze New York since it started in 2012. This year he opted to bring works by Brussels-based painter Justin Fitzpatrick, marking the artist’s debut in New York. 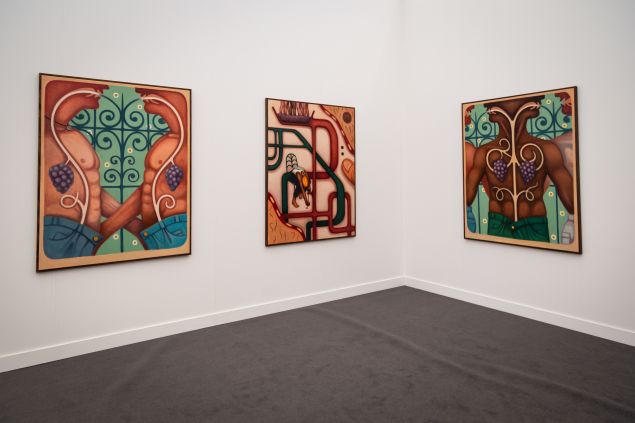 “I think he’s a good guy, I like his work, I’d like more people to see it. But I don’t know if showing the stuff I think is cool is a surefire way to run a gallery, that’s just a way for me to enjoy myself while doing it,” he laughed. Despite Hoyland’s apparent humility about his personal taste, he’d already sold most of the work in his booth by midday of the fair’s VIP preview, so maybe his gut was right this time. Nevertheless, he’s skeptical of the usefulness of fairs these days, citing the costs associated with them, not just for dealers but visitors as well.

Indeed, most collectors are often invited to art fairs and don’t pay entry fees. They’re ushered in by VIP car services provided by BMW to snap up the work they like the best. Meanwhile, members of the general public pay $74.50 for a full Frieze one-day package this year—plus a $4.50 service charge.

Clearly, the barriers to art fair entry are high for everyone but the people with money. Which is why the Instagram-tailored booths and photo-friendly artworks pose a potentially slippery slope. They represent a red herring in the quest more accessible art, their mass shareability raises the profile of the events to that of a pseudo cultural venue, to the point that we seem to have forgotten what they really are: industry-specific trade fairs that pander to the one percent. 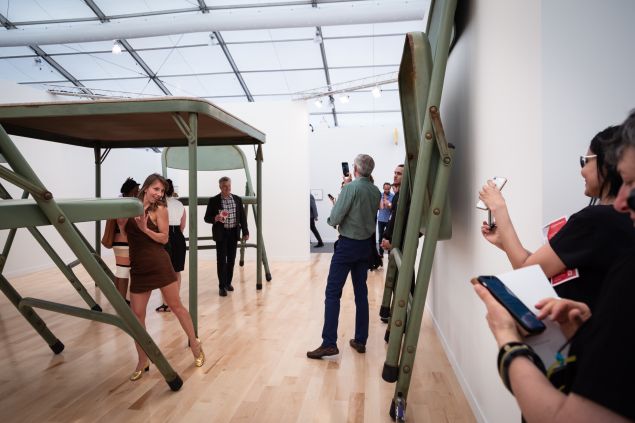 Perhaps it’s worth noting that the works that stick out in my mind the most from my hellishly-hot but newly-laid-out Frieze New York experiences are the ones that had hoards of visitors vying for photos with them throughout the day—Robert Therrien’s oversized folding table and chairs, and Takashi Murakami’s “For Your Infotainment” installation, both presented by the behemoth blue chip gallery putting all the little guys out of business these days, Gagosian. Copying this tactic, however, might not be the best selling strategy for the slightly smaller fry, especially if they end up just another bright booth shilling wares in a field of largess and neon. 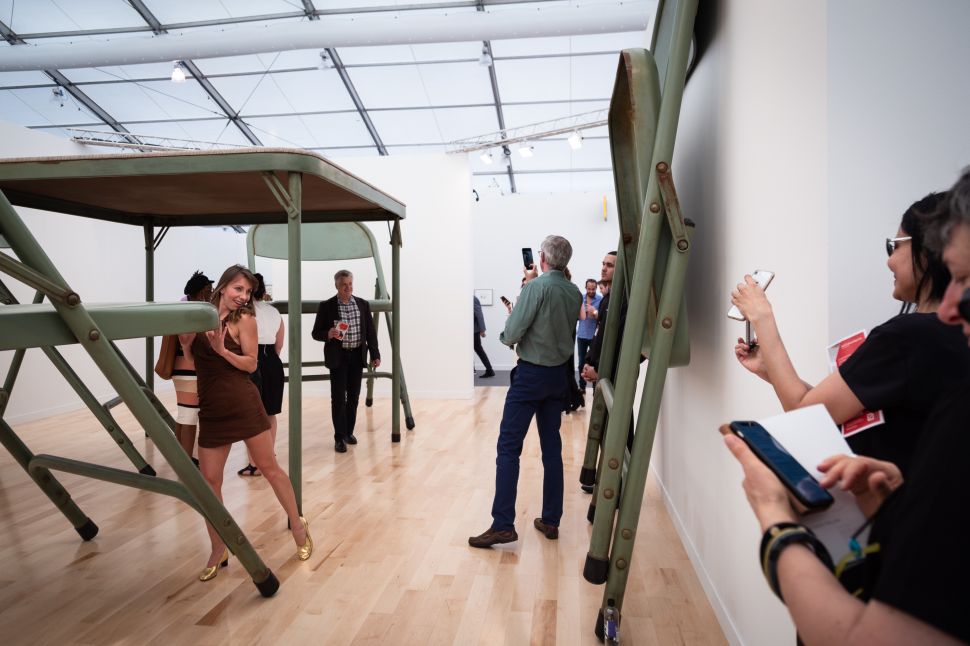