On Thursday, The New York Daily News reported that Weinstein, 66, was set to turn himself in on Friday morning.

Manhattan District Attorney Cyrus Vance, who had conducted a months-long joint investigation with the NYPD, filed felony sex crime charges against Weinstein in Manhattan Criminal Court on Friday morning. Weinstein faced charges over two women in 2013 and 2004, respectively, according to Vance.

Weinstein was arraigned in Manhattan Criminal Court. He was released after posting $1 million bail and agreed to to wear an electronic bracelet.

Vance encouraged additional survivors and other individuals with relevant information related to the case to call the Sex Crimes Hotline.

“Today’s charges reflect significant progress in this active, ongoing investigation,” he said in a statement. “I thank the brave survivors who have come forward, and my Office’s prosecutors who have worked tirelessly on this investigation. I would also like to thank Commissioner James O’Neill and our dedicated partners at the NYPD.”

At least 80 women have accused him of sexual misconduct, but the charges are connected to three cases that fall within New York’s statute of limitations, according to the New York Daily News.

Actress Paz de la Huerta told cops that Weinstein raped her twice in Tribeca in 2010. And Lucia Evans said that in 2004, Weinstein made her perform oral sex on him when she was a student at Middlebury College.

“The NYPD thanks these brave survivors for their courage to come forward and seek justice,” the NYPD said in a statement. “The arrest and ensuing charges are the result of a joint investigation between the NYPD and the Manhattan District Attorney’s Office. Additional information will be provided as it becomes available.”

At about 7:32 a.m., Weinstein walked into the 1st Precinct in Tribeca amid a barrage of about 100 reporters who were flanked by a barricade surrounding the precinct’s entrance. Police officers could be seen patrolling the area around the precinct. At around 8:48 a.m., he came out of the precinct and was in handcuffs, grimacing as reporters shouted questions such as “Harvey do you have any comment?” and snapped photos and videos of him.

He then got into a big black SUV, which subsequently drove past the precinct and headed to court where he was to be arraigned. His bail will be set at $2 million.

Harvey Weinstein in a car leaving the 1st Precinct in Manhattan pic.twitter.com/Jyqqui8puX

Weinstein was subsequently arraigned in court.

His attorney, Benjamin Brafman, addressed reporters outside of Manhattan Criminal Court after Weinstein was arraigned.

In a statement provided to reporters outside the court, Brafman also defended Weinstein.

“Mr. Weinstein has always maintained that he has never engaged in a non-consensual sexual behavior with anyone,” he wrote. “Nothing about today’s proceedings changes Mr. Weinstein’s position.”

This story has been updated to include comments from Benjamin Brafman,  Harvey Weinstein’s attorney, Manhattan District Attorney Cyrus Vance and the NYPD. 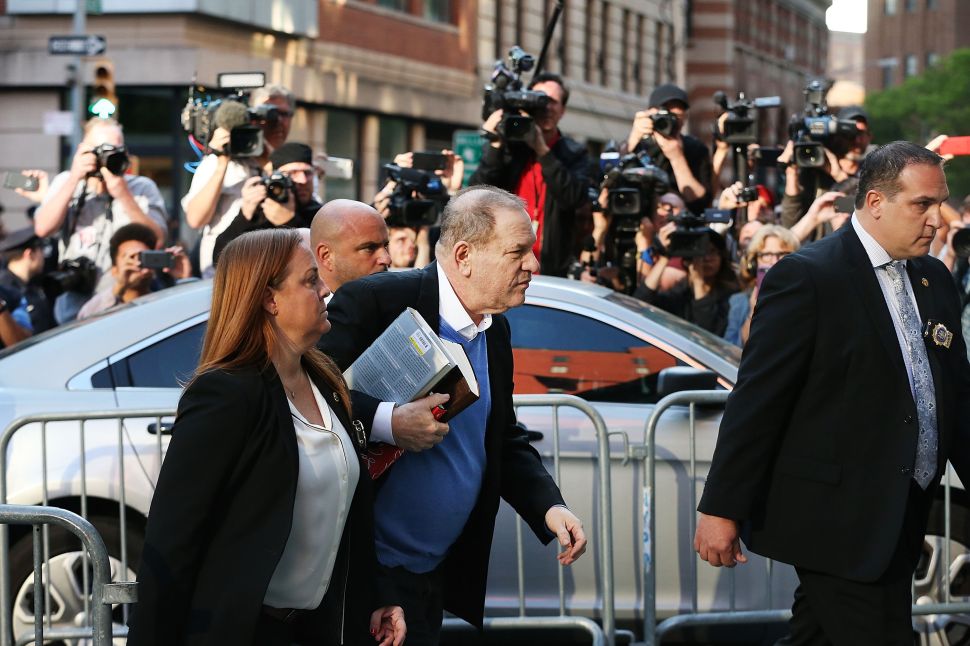