In a 12-minute keynote address at the New York State Democratic Party Convention in Hempstead, N.Y. on Wednesday afternoon that saw more than 200 people cheering  and holding “New York loves Hillary” signs, Clinton praised Cuomo, the New York congressional delegation and the Democratic elected officials, candidates and advocates in attendance for “helping to chart the future for New York.” She urged everyone to step up and fight to ensure Democrats take back Congress in the midterm elections.

“Now there’s a question that I get a lot,” she told the crowd. “What do Democrats stand for? Well, look around this room, you will see people who stand for an economy that works for everybody, who stand for universal health care and even better, they actually have plans to get us there.”

Clinton also said she is often asked about Democrats’ “bold ideas” to tackle the country’s most pressing issues. She maintained Democrats have plenty to offer.

“Well I don’t know about you, but I think it’s a bold idea that every person in this country should have a decent standard of living and a good job as well,” Clinton continued. “Everyone deserves the best possible start in life, quality health care throughout life and a safe and secure retirement. And it’s even bolder to have real plans to make those ideas into realities, the way the governor had to do here in New York and across the country.”

She noted that the United States has fallen on “difficult times” but insisted she has “never been prouder” to be a New Yorker or a Democrat. She reminded the crowd that Democrats rescued the economy from the financial crisis—the worst financial crisis since the Great Depression—and passed and saved former President Barack Obama’s Affordable Care Act (ACA).

She also credited the Democratic Party with helping to keep Planned Parenthood’s “doors open,” insisted the party will save Medicare, Medicaid and Social Security from “persistent Republican attacks” and keep fighting to achieve universal health care and job opportunities.

She also said Democrats will guarantee women’s rights to equal pay and to make their own health care decisions, well-funded public schools and colleges that respect teachers and help students succeed, and “actual common sense” gun safety laws. And she added that having more Democrats in elected office will yield victories in the areas of immigration and civic engagement.

People cheer for @HillaryClinton as @NYGovCuomo gives her flowers at @nydems convention pic.twitter.com/ZJS0V9wYNw

Clinton, who has opted to play a very small role in the midterm elections, formally endorsed Cuomo, who received 95 percent of the votes cast by convention delegates. He is facing a challenge on the left from actress and education activist Cynthia Nixon. Former Vice President Joe Biden will be endorsing Cuomo on Thursday—the second and final day of the convention.

Cuomo served as secretary of the U.S. Department of Housing and Urban Development (HUD) under Clinton’s husband, former President Bill Clinton, from 1997 to 2001. Cuomo and Clinton also live close to each other in Westchester County.

A source close to Sanders recently said it is “very unlikely” Sanders will get involved in the gubernatorial race. But Our Revolution, a progressive group Sanders founded, has backed Nixon.

“I have the personal privilege of knowing and working alongside Governor Cuomo for a long time, ever since he worked in the Clinton administration… there I saw his compassion and his determination as he worked to confront homelessness,” she recalled.

“I hope he’s going to have some new allies come November,” Clinton continued, referring to Cuomo. “That’s one of the reasons I’m thrilled that Stacey Abrams won the gubernatorial race. I supported her in the primary, and I look toward to supporting her campaign in the months to come.”

Following her defeat by now-President Donald Trump in the 2016 presidential election, the Clintons have seen their sway in Democratic circles diminish amid hunger among progressives for a new way forward that seeks new energy and fresh faces over establishment and centrist Democrats.

Clinton said Cuomo has taken on the Trump administration on a variety of issues and will continue to do so.

“He is not afraid to take on anyone who tries to hurt this state or this country,” she added.

Following Clinton’s speech, Cuomo brought her flowers and praised her for her accomplishments.

“Having Hillary Clinton here is a great treat,” he told reporters after her speech. “You know, we talk about female and the #MeToo movement. Hillary Clinton was in many ways, in my opinion, a great champion for women empowerment when it was hard. And she really was a pioneer.”

Despite the cheers, Brooklyn Councilman and lieutenant gubernatorial candidate Jumaane Williams—who backed Sanders in 2016—said Clinton’s appearance at the convention demonstrates that the state Democratic Party is ignoring the left.

“We know the Bernie-Hillary thing caused a lot of consternation for the party so why pick one or the other… maybe you choose both,” Williams contended.

During the convention, Buffalo Mayor Byron Brown, chairman of the state Democratic Party, who kicked off the convention, noted that as a result of Cuomo’s work, young people are coming back to Buffalo and technology companies are coming into the city.

“Buffalo and New York State stand as examples for this nation of what the Democratic Party can actually accomplish,” Brown said. “This is not democratic rhetoric. It is a new democratic reality and this is the alternative vision to the divisive, fearful… government we see in Washington. New York State is the model for the potential of a great democratic future.”

Early Wednesday morning, Nixon held a press conference outside of the Hempstead Long Island Rail Road (LIRR) station where she said Cuomo “isn’t a progressive and he knows it.”

“That’s why he and his allies have bullied progressive community groups and rallied the full force of the big money establishment,” she said. “But I won’t be scared out of the room. New Yorkers deserve a choice.”

Brooklyn Councilman Carlos Menchaca, the first elected official to endorse Nixon, said the Trump administration’s attacks on vulnerable communities make this year’s elections “a defining moment for our party.” He said Nixon will stand up for all New Yorkers, pointing to her support for driver’s licenses for undocumented immigrants and marijuana legalization.

“Cynthia offers a fresh vision of how things could be: transparent and collaborative,” Menchaca said. “If we want to see our changes, we will need to change our leadership at the very top to allow us to grow from the very bottom.”

After speaking before the Progressive Caucus and NY1 political anchor Errol Louis, Nixon left the convention, rushing past a barrage of journalists seeking to discuss the convention and her candidacy.

“He’s a two-term incumbent, dynastic governor,” Nixon told reporters before exiting the convention hall, referring to the fact that his father, the late Mario Cuomo, was also governor. 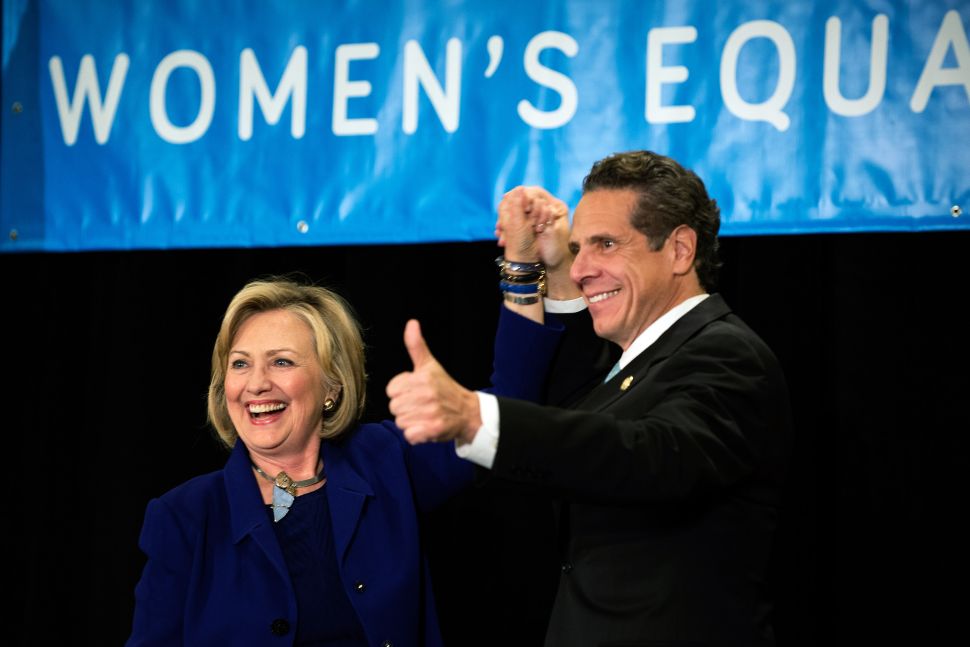