People are always quick to condemn a politician for doing things they might have done themselves under similar circumstances. Is it fair to paint Caren Turner with the David Samson brush based on the video of her exchange with a Tenafly policeofficer?

There is no question that Turner was emotional and that she should not have been disrespectful to the police in the field who were doing their job. There is also no question that no public official should ever use their public office to attempt to receive special treatment. However, the police officer on the scene, in this case, is not without some fault.

When you get past the news headlines and watch the video, Caren Turner did not act any more emotional than any other parent would have acted under the circumstances. Instead of explaining the situation to the parent as one human being to another, the police officer in this infamous video treated both the parent and her child like criminals.

While the public admonishment and discipline against Turner was swift and harsh, there has been no disciplinary action taken against the police officer. At the very least, the police officer on the scene needs sensitivity training.

All government employees serve the public and need to remember that at all times. The police officer in the video did the right thing by enforcing the law without regard to the status or position of the person violating the law. However, police in the field need the judgement, the wisdom and the skill to calm down emotional situations.

Objectively watching the video, the police officer’s failure to do so in this instance clearly inflamed the situation.

For those who missed the controversy, Caren Turner, a former Port Authority commissioner, made headlines when dashcam video emerged of her interaction with two Tenafly police officers who were conducting a traffic stop. Turner’s daughter was a passenger in a vehicle that had been stopped for several violations, including illegal window tint, lack of insurance and an expired registration. Turner rushed to the scene as the officers were impounding the vehicle.

When I look at this tape, it looks like the police officer provoked her further. Turner is a mother who likely received a panicked phone call from her daughter. When she arrived on the scene to ask what happened, the police officer refused to tell her.

New Jersey law did not prohibit the officer from sharing the details of the traffic stop with Turner, so why didn’t he just answer her?

If the officer had treated her as a taxpayer and the person he works for, then he should have answered her. She wasn’t asking for special treatment or for the ticket to be torn up. She just wanted to know what was happening to her child and her friends. She acted like any parent would in the situation. While most encounters with police officers go “by the book,” it is difficult to ignore the fact that some end very badly.

If the police officer answered her initial question respectfully and she continued anyway, Turner would clearly be in the wrong. If she tried to convince the officer to tear up the ticket because she was a Port Authority commissioner or because she knows the mayor, she would also be wrong.

However, that didn’t happen. What incensed her is the way she was treated by a public official whose salary she pays as an ordinary citizen.

“At no point did I violate the Port Authority’s Code of Ethics or ask for special treatment for anyone involved, nor did I suggest, in any way, that I would use my position at the Port Authority to affect the outcome of the violations issued to the driver,” Turner said in a statement published on NJ.com. Turner also acknowledged that she “let my emotions get the better of me” and expressed regret for “my tone toward the police officers.”

Turner has received backlash for suggesting that police officers share some of the blame for the incident getting out of hand. But doesn’t she have a point?

Police officers certainly understand that most people they stop in a car on the highway are going to be emotional. A parent arriving on the scene just adds to the emotional high pitch.

Whether the person who is stopped flashes a badge or a PBA card should not affect a police officer’s judgement. Neither should it have any impact on the police officer’s basic courtesy, respect and civility toward the citizens they stop.

Watch the Turner video again and watch more carefully how the police officer acted. Then, ask yourself if any of us would have responded much differently than Caren Turner. 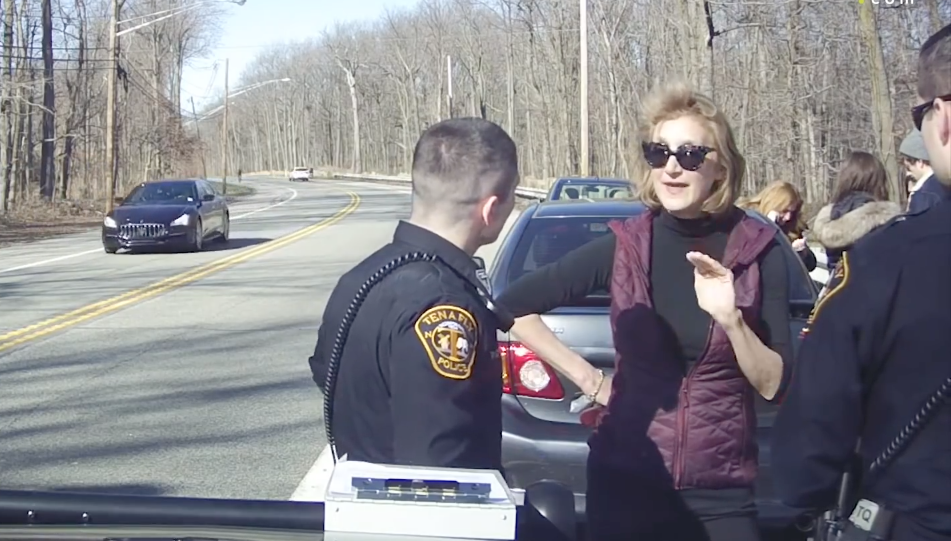