I recently ignited a firestorm with my column about the 2010 Smolensk air crash, which killed 99 people and decapitated the Polish government. My recommendation for a new, third-party inquiry into that disaster, based on access to all available evidence, and free of politics, upset some people. I question the motivations of Westerners who dislike Poland’s current government more than Vladimir Putin and his nasty regime, particularly when they masquerade as anti-Kremlin activists.

Moreover, the notion that Putin’s forces would blow up an airliner, without regard for innocent life, is anything but far-fetched. They’ve already done it. I am referring, of course, to the shootdown of Malaysian Airlines Flight 17 (MH17) over eastern Ukraine, an active warzone at the time, on July 17, 2014, killing all 298 passengers and crew aboard the doomed Boeing 777.

Most of them died a horrific death when a missile exploded at the aircraft’s nose as it cruised at 33,000 feet. This explosion killed the pilots instantly and led to the rapid break-up of the Boeing, its pieces falling in flames six miles to earth. Wreckage and mangled bodies were scattered over a 20-square-mile area in the war-torn Donetsk region of eastern Ukraine.

Dutch nationals made up two-thirds of the dead, 196 persons, so the Netherlands took the lead in the investigation, which published its findings in October 2015. Based on exhaustive examination of the wreckage and all available information, the Dutch report concluded that the Boeing 777 had been taken down by a surface-to-air missile of Russian origin, specifically the 9K37, called Buk (beech tree in Russian). Termed SA-11 by NATO, this is a self-propelled weapons system that provides air defense coverage to Russian ground forces—which was why a Buk was in eastern Ukraine that fateful day, since Putin’s Kremlin had invaded Donetsk earlier that year.

Dutch wreckage analysis left no doubt that a Russian Buk shot down MH17. Shrapnel which could only have come from that system was found in the wreckage and embedded in the bodies of the pilots, who were shredded when the missile exploded just outside their cockpit. No bona fide aviation experts have dissented from Dutch conclusions regarding what brought the Boeing down—or whose missile it was. Although debate continues about why a Russian air defense unit illegally positioned inside Ukraine’s borders brought down a civilian airliner—was it an intentional act or a terrible accident?—that the Russian military was the responsible party is not up for debate in the reality-based community.

For their part, the Kremlin and its propagandists for nearly four years now have played their customary fact-free games of spies and lies, claiming that the gruesome end of MH17 was caused by Ukraine somehow, despite there being zero evidence to back up that assertion. It is an established fact that the missile which killed 298 innocent people was fired by a Russian weapons system located in an area under Russian military occupation that day. No amount of Muscovite disinformation can change that awful reality.

This tragedy is back in the news this week because Dutch investigators have announced that the Russian military’s 53rd Air Defense Missile Brigade was the outfit which shot down MH17. Normally based in Kursk, not far from the border with Ukraine, that brigade was known to have deployed subunits in eastern Ukraine in 2014, so this conclusion is no surprise to anyone who watches Kremlin military news closely. Today, the foreign ministers of the Netherlands and Australia upped the ante, issuing a joint statement holding Russia responsible for this atrocity—Australia lost 27 citizens in the crash—and Western countries are already signing on to this conclusion, with Germany taking the lead. Predictably, the Kremlin is pushing back, implying that it is the victim of a nefarious smear campaign, but there is now so much evidence of Moscow’s guilt in the public domain that the usual Russian disinformation tricks are no longer working in the West outside the ranks of confirmed Putinphiles.

This is well-done open-source intelligence, but there’s not really much front-page news here. GRU’s involvement in the MH17 shootdown was known almost immediately, while within weeks of the catastrophe, Ukrainian intelligence was releasing signals intelligence (SIGINT) intercepts to the public which left no doubt that the Russian military was behind the shootdown. Moreover, investigative journalists in Germany within a few months of the disaster solidly fingered the 53rd Brigade as the culpable Russian military unit. While it’s good news that Western governments are finally holding Moscow to account for this terrible atrocity, there’s more than a bit of cheek in proclaiming long-ago reported information as breaking.

Then there’s the awkward fact that our Intelligence Community has known the full, terrible story of the MH17 shootdown from practically the moment it happened. Thanks to American acumen in SIGINT and satellite imagery, spies in Washington within mere days of the disaster knew who did it—and how the nightmare unfolded. As reported by The Washington Post only five days after the crash, American intelligence knew that the Kremlin was lying about its innocence in this sordid affair. The Obama White House authorized a limited release of intelligence information, based on “sensors that traced the path of the missile, shrapnel markings on the downed aircraft, voiceprint analysis of separatists claiming credit for the strike, and a flood of photos and other data from social-media sites” as the Post put it, to rebut Kremlin disinformation about the incident.

However, this was a tiny fraction of what our Intelligence Community knew about MH17. As three IC officials have confirmed to me, Washington possessed damning information about the shootdown, including SIGINT which left no doubt that the Russian military—specifically the 53rd Air Defense Missile Brigade—downed the airliner. Detailed, top-secret intelligence from the National Security Agency, which the White House was briefed on within a couple days of the disaster, told the tale. Nevertheless, the Obama administration elected to sit on this bombshell, allowing dishonest Kremlin narratives to gain traction as the public tried to ascertain what exactly had happened to the doomed jetliner.

Although it’s a rare thing for a White House to release top-secret SIGINT to the public to clear the air about an important issue, there’s an eerily exact precedent on hand. On the first day of September 1983, a Soviet jet interceptor downed Korean Air Lines Flight 007, a Boeing 747, close to the Soviet border, killing all 269 passengers and crew. Thanks to its intelligence bases all over the world, NSA within hours had hard evidence of what happened. Signals intercepts proved that the pilot of a Soviet Air Force Su-15 interceptor shot down the Boeing on orders from his superiors, including his chilling report back to his bosses: “The target is destroyed.”

Moscow was denying that it had any idea of what happened to the missing airliner, so President Ronald Reagan decided to push back. Taking a risk, the White House ordered the release of the top-secret NSA intercept to the public, and just five days after the loss of KAL 007, our ambassador to the United Nations, Jeanne Kirkpatrick, played the tape before the U. N. Security Council, publicly accusing the Kremlin of mass murder. This was a diplomatic defeat and humiliation of the highest order for the Soviets, tarring the regime with mass murder before the world.

President Barack Obama could have done the same four years ago, letting the world know just what the Kremlin did by releasing relevant intelligence, yet he chose not to do so. The pushback which Western countries are finally mustering over the murder of 298 innocent people, while admirable, is long overdue. It could – and should – have happened in late July 2014, led by the United States. This is just another example of the Obama administration’s troubling unwillingness to confront Putin and his regime over its mounting crimes and misdemeanors. By refusing to take a stand against Russian aggression, President Obama encouraged more of it—culminating in direct Kremlin interference in our 2016 election, with fateful consequences we are living with today. 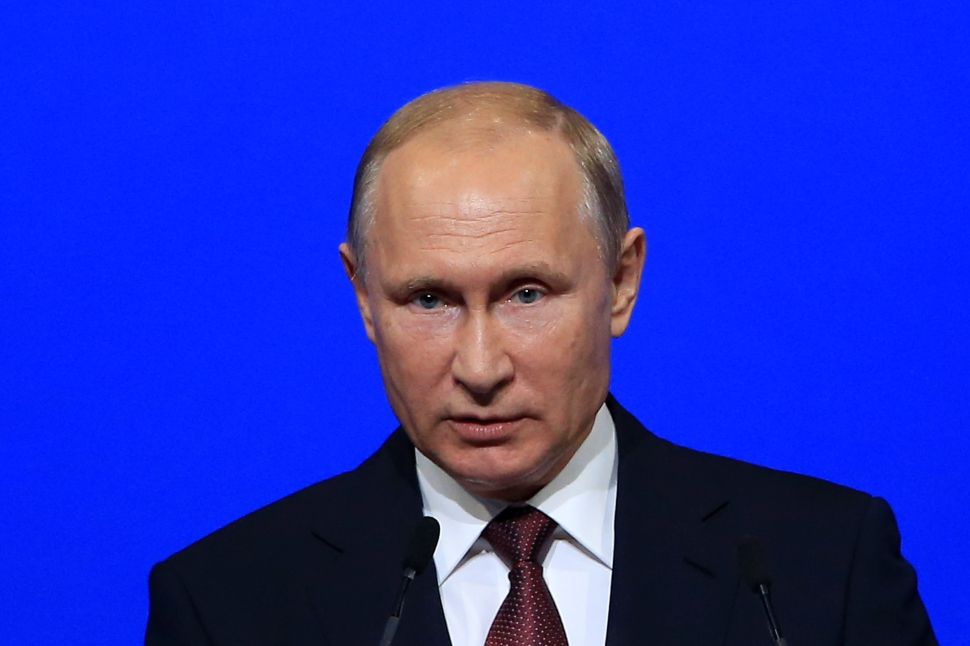