That’s Creole for “Little Haiti,” which is now coming to the Flatbush section of Brooklyn in the form of the “Little Haiti Business and Cultural District.” The district will celebrate Haitian culture and contributions to the city and the United States and promote economic development, culture, arts, neighborhood programming and tourism.

Brooklyn is home to the largest community of Haitian-Americans in the United States outside of Florida.

Individuals of Haitian descent constitute roughly 20 percent of the Caribbean population in Flatbush. Brooklyn has more than 90,000 Haitian-Americans—the third highest concentration in the United States, according to Migration Policy Institute, a think tank based in Washington, D.C.

About 190,718 Haitians live in New York State, with 156,000 living in the city, according to the American Community Survey.

Brooklyn Assemblywoman Rodneyse Bichotte—the first Haitian-American elected to the New York State Legislature from New York City—spearheaded efforts along with Brooklyn Councilman Jumaane Williams and the Little Haiti BK Coalition to get the designation. She said the number of Haitians living in the state are grossly underestimated, noting that it could be anywhere from 500,000 to 800,000.

“Little Haiti will be more than just a tourist destination,” Bichotte said at the formal announcement on Friday morning in Flatbush. “It will be a celebration of Haitian culture and recognition of Haitian contributions to this country. I wanna stress that this project is not meant to divide. It is meant to unite.”

The designation will cover the area bordered by Avenue H, Brooklyn Avenue, Parkside Avenue and East 16th Street and will also include Church Avenue between Brooklyn and Albany Avenues.

Once the City Council passes a resolution, the “Little Haiti” business and cultural district will be analogous to “Little Italy” in Manhattan. This could make it easier to get permits and allow for the creation of a cultural center and museum, as well as the building of a monument.

And “Little Haiti” will now be eligible to request funding that is earmarked for cultural and business initiatives. The city will also have a better understanding of where to allocate resources tailored to the Haitian-American population such as immigration services or Creole-translated informational packets.

The effort to establish “Little Haiti” in Flatbush met some resistance.

In 2017, the Little Caribbean cultural district was created for the area bordered by Flatbush, Church and Nostrand Avenues, thus leading some local leaders to argue that a special Haitian district was unnecessary.

Bichotte maintained that the designation will help elevate Caribbean communities as well as other communities. She pointed to plans to build monuments that will commemorate Caribbean leaders such as Dutty Boukman, a leader of the Haitian Revolution, which lasted from 1791 to 1804.

“Little Guyana,” Bichotte continued. “I also say Little Trinidad. I also say Pakistan. I also say Little India, and the list goes on and on and on because we want New York City to say we welcome Haitians and all from the Caribbean, especially when unjust immigration policies are pushing our people out of our community such as the Haitians with Temporary Protected Status.”

Rosemonde Pierre-Louis, chairwoman and co-founder of the Haitian Roundtable, a civic organization made up of Haitian-American professionals, said the new district allows Haitians to celebrate their ancestors.

Haitians have made significant contributions to the United States, including the role they played in the Louisiana Purchase in 1803, as well as the hundreds of volunteer Haitian soldiers who fought in the American Revolution. A monument was also put up in Savannah, Georgia to honor their contributions.

Deputy for Strategic Policy Initiatives Phil Thompson, who was representing Mayor Bill de Blasio, said the mayor is “all in” for the new district.

He noted “Little Haiti” is “really important for big Haiti” and said the Haitian Revolution was responsible for the “liberation of billions of people” and that the United States never would have gone west of the Mississippi River without the revolution.

“My family originally is from Durham, North Carolina, and 200 years ago, the black community in Durham, free blacks named their community ‘Little Haiti,'” Thompson said.

Brooklyn Councilman Jumaane Williams, a first-generation Brooklynite of Grenadian heritage, pointed to the challenges with which Haitians and Africans deal, pointing to Haitians’ connection to the continent.

“If you look at what happened in just the past year or two, the communities were singled out and called shitholes by the president of the United States of America,” Williams said. “One of those countries was Haiti. When a community steps up and says we are gonna push back on the perception on us, we have to celebrate.”

And he called the designation a “proud day” for all black communities, adding that it is a welcome addition to Little Caribbean.

Dr. Ron Daniels, an African-American radio talk show host who was also an independent presidential candidate in 1992 and worked on civil rights activist Jesse Jackson’s presidential campaign, said the designation is important because Haiti “gave us back our dignity when we were on our knees.”

The formal unveiling of the new district coincided with Haitian Flag Day, a major holiday in the Haitian community.

Haitian and other Caribbean leaders and lawmakers also unveiled the new sign for Toussaint L’ouverture Boulevard, which will be placed along portions of Nostrand Avenue. Toussaint L’Ouverture was a key Haitian revolutionary leader.

Portions of Rogers Avenue will be renamed after Jean-Jacques Dessalines, the Haitian Revolutionary leader.

Kenneth Mbonu, executive director of the Flatbush Junction Business Improvement District, recalled attending a historian’s lecture in Connecticut a few weeks ago in which the historian would not acknowledge L’Ouverture’s contribution.

“He asked if anyone had any questions and I raised up my hand and I said, ‘Are you aware of—do you know about Toussaint L’Ouverture?,'” Mbonu said. “‘Are you aware that without him and what he did to Napoleon’s French army, New Orleans would not exist?’ And he said, ‘Well, that’s a discussion for another day.’ But where I’m coming from is [that] it’s very important that we know our history.” 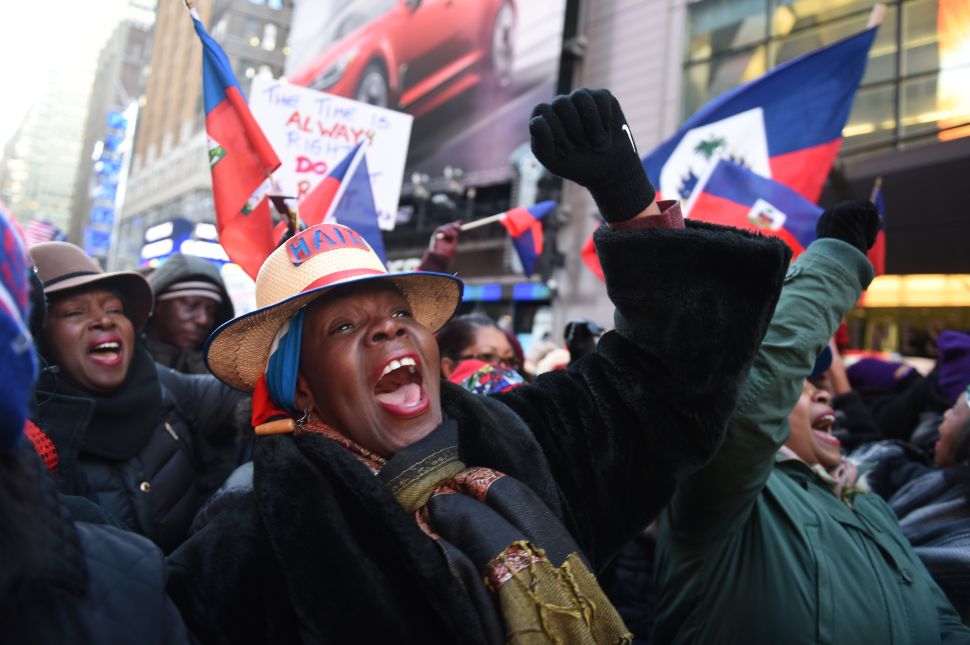