Just three days before Mother’s Day, a New York congressional candidate won her fight to get permission to use her federal campaign funds to pay for childcare expenses that she racked up for her two children throughout her campaign.

On Thursday, the Federal Election Commission (FEC) voted unanimously—by a vote of 4-0—to allow Democrat Liuba Grechen Shirley, a community organizer who is challenging Rep. Peter King, a Long Island Republican, to use the funds for her two children: Nicholas, age 2, and Mila, age 3.

Shirley, 36, is the first woman to ever try to spend federal campaign funds on a babysitter. She currently pays her part-time babysitter $22 an hour for roughly 20 hours of work per week.

Before she decided to run for Congress in October 2017, she worked from home as a consultant and cared for her children.

In a statement, Shirley called the FEC’s ruling a “landmark decision” for women throughout the nation.

“I’m proud to be the first woman in the nation to spend federal campaign funds on childcare—and I hope this decision inspires thousands of women across the country to run for office,” she said. “If we want leaders who will stand up for women and working families, then we need to remove the barriers that keep women and working parents from running.”

And she pointed to the financial burden that comes with raising children while running for office.

“There’s a reason more than half of Congressmembers are millionaires: running for office takes a huge toll on a family’s budget, especially while raising children,” Shirley continued. “This groundbreaking decision will remove a major financial obstacle for working families and mothers at a time when women are increasingly considering elected office.”

She testified before the FEC on Thursday in Washington, D.C. to explain why parents running for office should be allowed to use campaign funds for childcare. She first submitted her request with the FEC in early April.

Ellen Weintraub, the FEC’s vice chairwoman, said she has a “long track record” of expressing concerns about political candidates using campaign funds for personal use but said that the “request you’ve made is tailored.”

“We’re not creating a wholesale carve out for childcare,” Weintraub said during the FEC’s open meeting on Thursday, according to CNN. “You still can’t use campaign funds for babysitting on date night, but to the extent that you need it and other candidates similarly situated in order to facilitate their campaign work, this answer, should we approve it, would allow campaign funds to be used for those expenses.”

Federal law states that political candidates are allowed to use campaign funds for “authorized expenditures” related to the campaign, but that it cannot go toward personal use.

Her Democratic opponent, Suffolk Legislative Leader DuWayne Gregory, opposed her request to use campaign funds for childcare, arguing that it is a “slippery slope” in the direction of a personal expense.

Women currently make up less than 20 percent of Congress, and a small number of the 106 women serving on Capitol Hill have young children. There is no public data on the number of mothers in Congress.

The Brookings Institution, a nonprofit public policy organization based in Washington, D.C., recently found that childcare is a primary reason why women opt not to run for office. And after conducting a survey of potential female candidates, the nonprofit found that women are 15 times more likely to handle the majority of childcare.

At the end of April, former Secretary of State and 2016 presidential candidate Hillary Clinton, who also served as a U.S. senator in New York, expressed support for the use of campaign funds for childcare expenses when candidates are campaigning.

And more than 2,300 supporters from across the nation signed a petition in support of Shirley, who also received handwritten notes of support and donations for her babysitting costs, according to Shirley’s campaign. 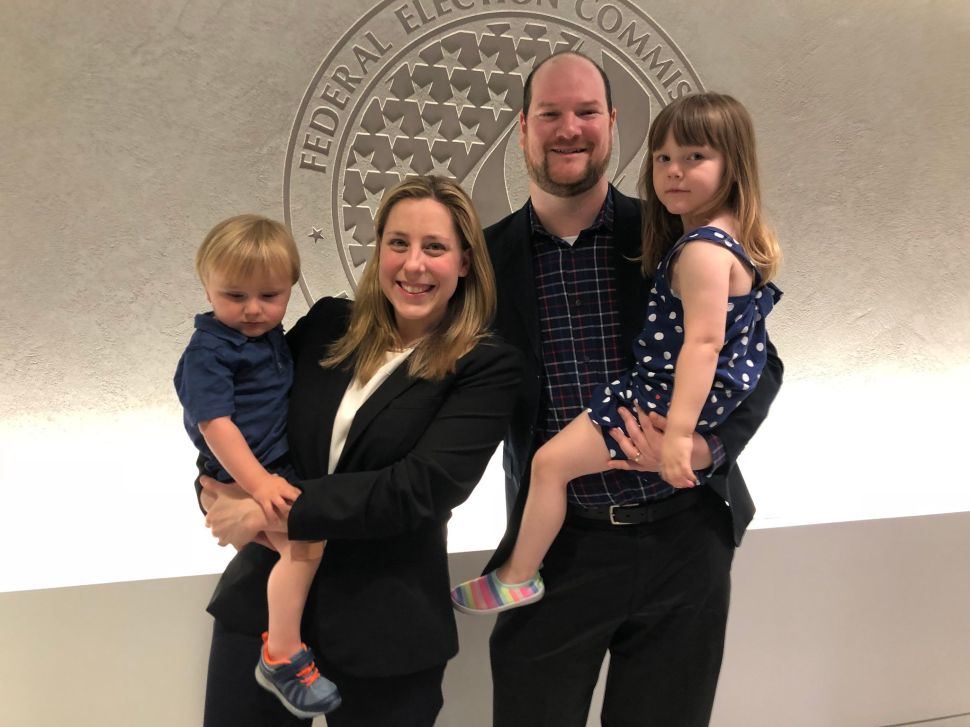