Next week Sotheby’s will auction Amedeo Modigliani’s 1917 Nu Couché (sur le côté gauche) or Reclining Nude, the largest painting that the artist ever made. The auction house predicts that the picture, consigned by the Irish horse breeder John Magnier, will sell for at least $150 million. Add in Sotheby’s confidence in international demand for the picture (and in its authenticity) and Reclining Nude could bring a much higher price.

Modigliani (1884-1920) is spiraling upward in value. The same nude that’s on the block Tuesday night sold at Christie’s in 2003 for $26.9 million when the gambling tycoon Steve Wynn put it up for sale.

A comparable (although smaller) Modigliani nude set the current auction record, also at Christie’s, when a Chinese buyer paid $170.4 million in 2015, and the market has risen since then. Unless Reclining Nude is shown to be something other than a work by Modigliani, $150 million seems reachable.

Given this much flesh, the future still isn’t all rosy. The problem is fakes. Reclining Nude at Sotheby’s is not a forgery; yet numerous Modigliani fakes have surfaced in recent years. He’s among the most forged artists in the entire world, by current estimates. And the number of fakes that have appeared recently has been described as an “epidemic.”

Marc Restillini, a French expert on Modigliani and a foe of forgers, had some choice reflections after speaking with other Modigliani experts on a panel  organized by the International Foundation for Art Research (IFAR) on April 24, the day that Sotheby’s announced the consignment of Reclining Nude.

Restellini has completed an updated catalogue raisonne, listing all the known and authenticated paintings by Modigliani. He expects to publish it in a year. Kenneth Wayne, an American Modigliani specialist, is working on his own catalogue raisonne, too, even though he describes the situation surrounding the artist as “a mess.”

It was Restellini who helped expose an exhibition at the Palazzo Ducale in Genoa in 2016, in which eight oil paintings and seven drawings by Modigliani were found to be forgeries. At the time, Restellini told the Telegraph of London that there were “at least 1,000 Modigliani fakes in the world.” He has said that his alerts about fakes have brought death threats.

And why not? Exposing fakes shrinks a lucrative market. In the most widely accepted catalogue raisonne of Modigliani, there are 337 authenticated paintings—338 if you count a work that’s painted on both sides. That means, by Restellini’s estimate, that more than half of those circulating are imposters.

In an interview with Observer last week, Restellini said that, for Modigliani, “the problem is not growing, but it is being transformed.”

“My worries aren’t about the number of fakes, which is going down, but about the type of forger that we’re dealing with,” he noted. In some ways, this is an even worse situation than if there were simply more Modigliani forgers coming on to the scene. “We have people who are more sophisticated than those of 15 or 20 years ago. Hence my sense of urgency, on the front lines of this battle today. I think that the scientific community [investigating art fakes] doesn’t realize this.” Restellini contends. And the art world is, in many ways, only adding to problem. “Its response is naïve. Instead of taking necessary steps to fight forgeries, it’s taking steps that will encourage them.”

In fact, Restellini said, the Modigliani market is being cleaned up after a report on the Genoa exhibition was issued in Italy and scrutiny from law enforcement intensified. Yet that won’t stop some, and in many other fields, such as Russian avant-garde, he says, “the threat of fakes is monstrous.”

Why? Because forgers are getting better at it. And we’re providing the information they need to do so.

“Forgers are now setting up their own laboratories, and those laboratories are determining that fakes are authentic. It’s a bit like accounting. You can create an accounting report that says whatever you want it to. The same goes for scientific analysis,” he said.

Assuming that legitimate scientific analysis can reveal materials used in the most convincing forgeries, Restellini insists that those reports should be kept secret.

It’s the equivalent of not sharing recipes. “I think that it’s dangerous to publish those reports. You’re creating an instructional manual for forgeries,” he said.

After all, he noted, “these studies are only interesting for a tiny group of people. If you publish an article saying that barium or some other material is in a painting, who is really interested? The only people whom you are serving by publishing that are forgers.”

Restellini goes even further. All forgeries, once discovered, should be destroyed, he believes. Other Modigliani experts argue that fakes should be preserved to be studied. “There’s so much to be learned from more scrutiny of these fakes,” said Dean Chapman, an independent researcher, who reflects the majority opinion among experts.

“I hear people say, ‘let’s make a museums of fakes’—that’s absurd,” said Restellini. “A fake is a criminal work, it brings nothing to art history. If you don’t destroy it, it will reappear. A fake is not a work of art.”

Strong views bring strong reactions. Restellini says the death threats keep coming. “Still today,” he noted. “I got an anonymous email four months ago, saying that I would be assassinated. It’s not normal. I’m an art historian, I’m not a policeman.”

With the upcoming Sotheby’s sale expected to break records (that is, more than it has already with its estimate), it seems clear that the messy state of the Modigliani market won’t be settling down any time soon. 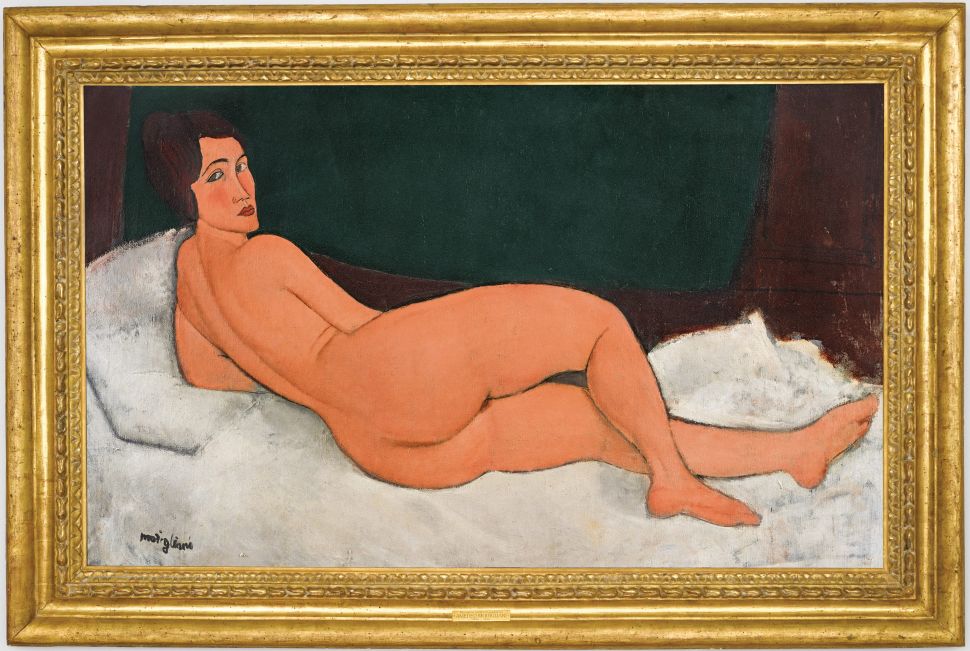