Tully is a downbeat dirge mislabeled as a comedy. They’re trying to lure Charlize Theron fans (like me) who might otherwise run in the opposite direction if they knew it was a somber movie about the devastating mental and physical traumas of a stressed-out housewife after childbirth. Frankly, I don’t know a single man who is dying to see a movie about postpartum depression, and it holds little fascination for the women who have either no knowledge of the subject or have experienced it already. No matter how you regard its limited commercial possibility for success, there is nothing funny about Tully.

Having forewarned you, I must add that suffering through her never-ending agony is less daunting than it has to be when it is Theron who is doing it for you. Her passion, skill and commitment to every project is always a revelation, even in lousy movies like the re-make of Mighty Joe Young or trash like Atomic Blonde and Snow White and the Huntsman. One of the most beautiful and glamorous throwbacks to the golden years of Hollywood, she lights up the dreariest vehicles, and there is no one more chameleon-like when it comes to disfiguring herself for the sake of a character. She was hardly recognizable as the lesbian serial killer in Monster, and she won an Oscar for it. She would call it “doing it for the movie.” I call it “doing what you gotta do to get good reviews and win awards.” In Tully, she does it again.

The third collaboration between esteemed director Jason Reitman and screenwriter Diablo Cody after Juno and Young Adult, it’s about Marlo, a woman with two children and nine months pregnant with a third one on the way, married to a handsome but worthless jerk named Drew (Ron Livingston) who does nothing to help her maintain her fake status as dream wife and perfect mother. When she falls into bed at night, exhausted and worn ragged after micro-managing a day of never-ending responsibilities, the selfish and immature Drew buries himself in video games.

Theron wears no makeup and her stomach is the size of a Volkswagen, but she can’t hide her appeal, even as the movie takes you all the phases of pregnancy and childbirth—the misery, the pain, the vomiting, the catheters, the endless dirty diapers, the all-night crying and pooping from the nursery. Marlo has no time for lipstick or nutrition, so she gorges on frozen pizza and chips while the mess and stress pile up to the point of near insanity. She takes one look in the mirror and says, saggingly, “I feel like an abandoned trash barge.” It’s a role that required the luscious star to gain sacks of weight and look like pork tartare.

Suddenly, her rich brother (Mark Duplass) brings in a night nanny named Tully (Mackenzie Davis) to look after the baby while Marlo gets some sleep. Tully is a miracle. We could all use a Tully. At 26, she’s light-hearted, a great nurse, a wow with babies, cooks a healthy breakfast, and gives Marlo the sunny outlook and companionship she needs. Not only does she take care of the baby, but she cleans the house, arranges flowers, and bakes cupcakes. When she decides the job is finished, she exits as abruptly as she arrived, but Marlo is invigorated enough to become Super Mom on her own.

And that, ladies, is, in real life, the kind of delusion that will lead you to make a substantial contribution to the rising divorce rate. The Reitman-Cody team goes for relaxation and niceness, hoping you won’t notice that nothing ever really happens in the bland narrative. In the end, everybody smiles, including the housewife who is on the verge of a mental collapse.

How times have changed. In the old days, Bette Davis would have had a breakdown without an apology, dumped the dopey, abusive husband with the children, and become the editor of a progressive magazine for women in the labor force who aim to improve the world and still have enough time left over to shop for lingerie.

Tully fails on every level except one: Charlize Theron wakes it from its lethargy, takes it by the jugular, and squeezes until it yells. She plays her preconceived gender role with complete dedication and patience. Even with her hands covered with poop, she makes you believe she’s acting from real-life experience. She and sparky Mackenzie Davis have so much chemistry that I kept wishing Marlo would dump her deplorable life and marry Tully. She doesn’t, unfortunately, and the movie settles for the outdated notion that everything in the world can change as long as a woman is willing to change first. If Jason Reitman and Diablo Cody believe this fantasy, then they obviously don’t get out much. 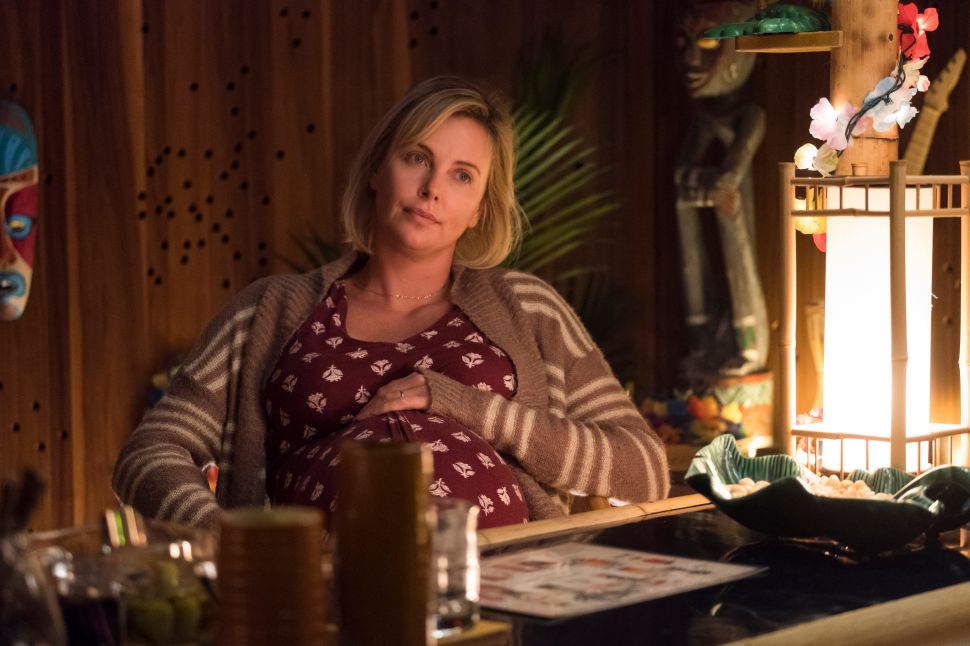