Back in March, it was reported that Barack and Michelle Obama were being courted by Netflix, Amazon and Apple for an unprecedented streaming deal post-White House. Now, Netflix has announced that it has reached a multi-year agreement with the former first couple to produce films and series with the streamer.

In conjunction with the move, the Obamas have established Higher Ground Productions under which they will produce their Netflix content.

“One of the simple joys of our time in public service was getting to meet so many fascinating people from all walks of life, and to help them share their experiences with a wider audience,” said former President Obama in a released statement. “That’s why Michelle and I are so excited to partner with Netflix—we hope to cultivate and curate the talented, inspiring, creative voices who are able to promote greater empathy and understanding between peoples, and help them share their stories with the entire world.”

“Barack and I have always believed in the power of storytelling to inspire us, to make us think differently about the world around us, and to help us open our minds and hearts to others,” added Mrs. Obama. “Netflix’s unparalleled service is a natural fit for the kinds of stories we want to share, and we look forward to starting this exciting new partnership.”

“Barack and Michelle Obama are among the world’s most respected and highly-recognized public figures and are uniquely positioned to discover and highlight stories of people who make a difference in their communities and strive to change the world for the better,” said Netflix Chief Content Officer Ted Sarandos. “We are incredibly proud they have chosen to make Netflix the home for their formidable storytelling abilities.”

This is a massive win for the streamer, which continues to expand its library of content and plans to have around 1,000 total originals on the platform by the end of 2018, according to Sarandos. High-profile exclusive content, such as this, is a major reason why Netflix has widened its lead in Morgan Stanley’s recent survey to find which platform boasts the “best original programming.” Netflix came out ahead by a wide margin.

The company was recently valued at $140 billion, more than Time Warner ($75 billion), McDonald’s ($100 billion) and General Electric ($130 billion). The Obama deal is sure to inspire even more confidence from Wall Street, as just the mere rumor of their deal generated a flurry of positive reactions back in March.

“With media reports indicating that former President Barack Obama is in advanced negotiations with Netflix to produce a series of high profile shows, we would characterize this as a ‘home run’ deal for the company as they are aggressively looking to acquire high profile talent and original content to further feed the Netflix consumer machine,” head of technology research Daniel Ives wrote in a note to clients two months ago, per CNBC.

“We believe Netflix remains in a unique position of strength to grow its content and distribution tentacles over the next 12 to 18 months and thus further build out its massive content and streaming footprint with a potential Obama deal the latest ‘feather in its cap,’” he continued.

For the Obamas, the Netflix deal comes after the couple negotiated a lucrative book deal that was said to be worth between $60 million and $65 million. Given that the streamer recently gave Ryan Murphy somewhere in the vicinity of $300 million and Shonda Rhimes $100 million, we can safely assume the Obamas are being paid handsomely for this new endeavor.

The former president recently appeared on David Letterman’s Netflix series My Next Guest Needs No Introduction. 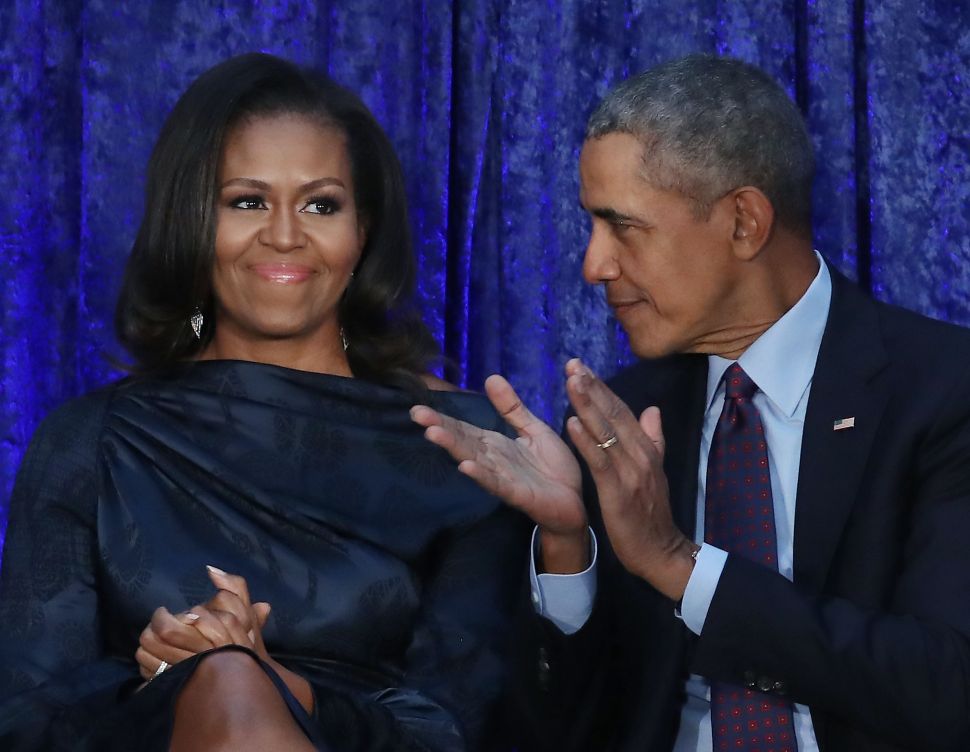