New York City could become the first city in the United States to adopt supervised injection facilities—also known as safe injection sites—in an effort to combat drug overdose deaths and the opioid epidemic.

On Thursday evening, The New York Times reported that Mayor Bill de Blasio has moved to open four safe injection sites—which he has dubbed “Overdose Prevention Centers”—as part of a one-year pilot program. The facilities will be in Washington Heights in Upper Manhattan, the Gowanus section of Brooklyn, the Longwood section of the Bronx and Midtown West in Manhattan.

The mayor had upset advocates when he missed an April deadline to release a safer consumption spaces (SCS) feasibility study.

“After a rigorous review of similar efforts across the world, and after careful consideration of public health and safety expert views, we believe overdose prevention centers will save lives and get more New Yorkers into the treatment they need to beat this deadly addiction,” de Blasio said in a statement.

Groups such as VOCAL New York, SIF (Safe Injection Facilities) NYC and End Overdose New York—which have held many rallies calling for the sites to be implemented—have been leading the fight to bring the sites to the city.

“We’re excited that the mayor is on board and he’s gonna move forward with this plan, and we think that they can’t get up and running fast enough,” Aguilera said.

She noted VOCAL-NY runs a syringe exchange program and that the group has been publicly running a campaign to bring the sites to the city for about four years.

She said the sites are not just a place for injecting drugs but to connect individuals to a community of health care professionals, peer workers and peer coordinators.

And she acknowledged the sites are a “new departure” for the United States, which she noted is steeped in “just say no” and “tough on drug users” rhetoric and policies.

“This is something that, for a lot of people, is hard to understand and that’s why we want to be an example of what harm reduction and syringe exchange can do for people’s lives,” Aguilera continued. “In the 1990s, when syringe exchange started, HIV infection rates among people who inject drugs was incredibly high. Today, it’s something like three percent and that’s because of syringe exchange.”

Overdose deaths in New York City have risen steadily over the past 15 years, according to a report released by the city’s Department of Health and Mental Hygiene (DOHMH) on Thursday night.

The report was commissioned by the City Council in 2016 and backed by City Council Speaker Corey Johnson, who was the head of the Council’s Committee on Health.

In 2017, provisional data confirmed 1,441 overdose fatalities in the city, which the report notes was the deadliest year on record.

Someone dies from a drug overdose in the city every seven hours, and more people died from overdose in 2017 than from suicides, homicides and motor vehicle accidents combined, the report noted.

And since 2014, fentanyl—an opioid that is 50 to 100 times more powerful than morphine—has driven the dramatic increase in overdose deaths.

On Wednesday, First Lady Chirlane McCray—who spearheads the ThriveNYC mental health initiative—said the facilities are a “great concept” but said other issues are at play, arguing that it is “more important to be right than to be fast.”

And last week, former Mayor David Dinkins announced his support for the facilities.

Melissa Moore, New York State’s deputy director for the Drug Policy Alliance (DPA), told Observer that at Insite, the safe injection site in Vancouver, 35 percent of participations get a referral to detox or treatment.

She noted the sites reduce criminalization and improve neighborhood safety and help prevent people from contracting blood-borne illnesses and other issues “because they have a safe, sterile space to use.”

“They’re intended to be co-located with existing syringe exchange programs and other programs that are already engaging with the population of people who use drugs,” Moore said.

And she said advocates will be looking to the New York State Department of Health (DOH) and Gov. Andrew Cuomo “to also take action on this.”

“This is a statewide issue and we need to make sure that New York state as a whole is also implementing as many public health space solutions as possible that are responsive to community needs,” Moore said.

On Friday, Cuomo said the city’s plan to have safe injection sites is being reviewed.

Upper Manhattan Councilman Mark Levine, chairman of the Council’s Health Committee, told Observer the sites are a “proven method” to prevent overdose fatalities. But he said the sites can be implemented faster and still allow for community input given that the facilities already exist.

“The plan is not to create new facilities… it’s to augment the services in existing needle exchange programs,” Levine said.

Charles King, president and CEO of Housing Works, a New York City-based nonprofit that fights AIDS and homelessness, noted the AIDS epidemic has shown the effectiveness of harm reduction policies.

“Housing Works is thrilled that Mayor de Blasio has stepped up to do the right thing, and given the skyrocketing rates of overdose in New York City, we only wish this administration’s support for an intervention that we have long-known to save lives had come sooner,” King said in a statement.

“In the long run, this type of intervention will not only help the individual, but also our system by reducing the spread of life threatening conditions and alleviating the strain on our healthcare system by reducing hospitalizations and emergency visits,” Rivera said.

On Staten Island, where there are no plans to put safe injection sites, there was some opposition.

On Friday morning, Eric Phillips, de Blasio’s press secretary, noted the groups running the pilot did not recommend a Staten Island location and that Staten Island District Attorney Michael McMahon will not sanction one.

“What would really prevent overdoses is a comprehensive strategy to boost awareness, educate children and young adults, provide effective treatment and post-rehabilitation programs, and ramp up enforcement as President Trump has proposed to make drug dealers pay a high price for the destruction they cause to our community,” said Grimm, a prominent Trump supporter.

Staten Island Assemblywoman Nicole Malliotakis, de Blasio’s 2017 Republican opponent, is happy Staten Island was not included but is concerned about the impact on Brooklyn.

“The people in Bay Ridge have been advocating for an expansion of its local senior centers and more school space to relieve overcrowded classrooms,” said Malliotakis, who also represents Bay Ridge. “Both of these initiatives are more worthy of taxpayer dollars than community shooting galleries, which will inevitably exacerbate the epidemic our community has been fighting tooth and nail.”

The mayor’s office told Observer Malliotakis’ assertion that the city will be using taxpayer dollars for the facilities is inaccurate, noting that the sites are privately funded and run.

Aguilera said the lack of a site in the borough “is indicative of that political reality.”

“I find it completely ironic that Michael Grimm is lecturing people on criminality and frankly it’s sad and Staten Island residents should be disappointed that their elected officials are actively resisting proven public health interventions that prevent overdose deaths,” she argued, noting that Staten Island has the highest rate of overdose deaths.

“I believe there has never been a single death by overdose in any safe injection facility across the world,” he said. 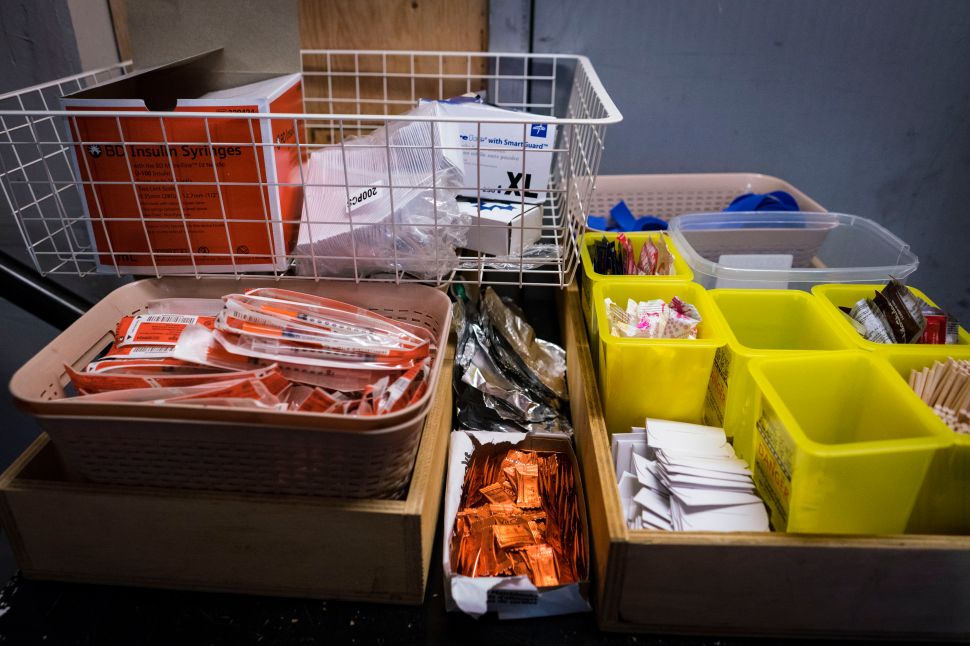