A regular business news follower would notice this: It’s increasingly difficult to name the CEO of a household brand.

Who’s the CEO of Google? And Microsoft? What about Amazon? Hold on for a second before you shout out “Jeff Bezos!” Is it “Bezos” or “Bezo?” Also, are you sure you’re pronouncing it right?

Well, what does it matter anyway?

A last name says a lot about a person’s ethnic and family background. So, a sudden abundance of CEOs and founders with foreign-sounding names may be a hint of a broader change in America’s c-suite. As some keen business observers have noticed, foreign-born executives have been taking more top seats at American companies in recent years. In Silicon Valley, in particular, immigrants and non-white executives dominate the top tech companies.

But first, it’s important to get their names right.

Here’s our humble ranking of 11 difficult celebrity names in business, and how to say and spell them correctly, from the simple but tricky to the absolutely unpronounceable:

Jeff Bezos, while not overly complicated by any standard, is one of the most easily misspelled names even for professional writers. As of today, there are still a handful of “Jeff Bezo” floating around on the internet in writings about the chief of Amazon: a recent USA Today article (since corrected), a blog post by Salesforce (also since corrected), an inconspicuous headline in the Indian newspaper Indian Express (still wrong) and a fan-made biography video on YouTube about “Jeff Bezo, the founder of Amazon.”

In fact, Jeff Bezos’ last name wasn’t originally Bezos. He had an even better one: Jorgensen, from his father, of Danish-Norwegian origin. Soon after Jeff’s birth, his parents divorced and, at the age four, he was renamed Jeff Bezos when his mother remarried a Cuban immigrant named Miguel Bezos.

Given his frequent appearance in news headlines (especially lately), Mark Zuckerberg shouldn’t be a difficult name for anyone. And yet, the three-syllable German Jewish surname, which means “sugar mountain,” can sometimes be a mouthful. At Zuckerberg’s congressional hearings last month, one senator, seemingly wanting to say “Zuckerberg” and “gentleman” at the same time, accidentally blurted “Mr. Zuckman.”

Peter Thiel was born in Germany in 1967 and moved with his parents to the U.S. at age one.

Thiel is one of the first investors behind Facebook and the founder of Palantir Technologies, a major data analytics firm. He began gauging mainstream media attention during the 2016 U.S. presidential election for his outspoken endorsement of Donald Trump.

But if you come across a headline that reads “Peter Theil,” it’s probably him, too.

No idea how to pronounce either part of the name of Google’s CEO? You shouldn’t complain, because Sundar Pichai is already a simplified version of his real name: Pichai Sundararajan (pronounced soon-duh-r-uh-r-ur-juh-n) of Indian origin.

Pichai was born and raised in India. After graduating from the Indian Institute of Technology with a degree in engineering, he moved to the U.S. in the 1990s to pursue a master’s degree at Stanford University.

Pichai joined Google in 2004 as a product manager. He led the development of a few key Google products, such as Chrome, Google Drive, Gmail and Google Maps. He was named CEO in 2015 as part of the restructure of Google’s parent company Alphabet.

Pichai was reportedly once considered for the role of CEO at Microsoft, which was eventually taken by another Indian, Satya Nadella.

So here are a few more tricky Indian names.

Nadella joined Microsoft shortly after earning his MBA. He played an important role in developing Microsoft’s cloud computing products and rose the ranks to oversee the company’s entire B2B department. Nadella was named CEO in 2014. He is the third CEO in the company’s history (after Bill Gates and Steve Ballmer) and the first non-white person to take the position.

Indra Nooyi is the Sheryl Sandberg of India: she comes from an Ivy League pedigree, has a flawless resume filled with Fortune 500 company names, holds a c-level position at a multi-billion-dollar company and is widely considered as one of the most successful female executives in America today.

Born and raised in India, Nooyi actually started her career at home (as a product manager for Johnson & Johnson) and didn’t come to the U.S. until 33 to pursue a master’s degree at Yale’s School of Management.

After graduation, she worked for Boston Consulting Group and Motorola, and joined PepsiCo in 1994 to direct the company’s overseas strategy. She was named CFO in 2001 and CEO in 2006.

Alexis Ohanian was born in Brooklyn, New York, in an Armenian-American family. His great grandparents came to the U.S. as refugees after the Armenian Genocide.

Ohanian co-founded Reddit in 2005 with his college friend Steve Huffman. He left Reddit in 2010 and launched a micro-finance startup in Armenia. He was named the “Ambassador to the East” by Y Combinator, the startup incubator which provided the initial funding for Reddit.

The surname of the ill-reputed Uber founder is of Slovakian-Austrian origin. Like Bezos and Thiel, Kalanick is also a favorite of those who can’t spell.

Kalanick cofounded Uber in 2009 and served as the company’s first CEO. Despite Uber’s wild success, his leadership came into question in early 2017 when multiple Uber employees exposed the toxic work environment at Uber. Due to severe pressure from investors, Kalanick stepped down from the CEO post in June 2017 and made himself an unforgettable walking cautionary tale of Silicon Valley.

Nevertheless, he walked away from Uber with $1.4 billion in stock sales. With that money, he recently launched his own venture capital fund and landed a new CEO job.

Hidden behind the new Uber CEO’s endless surname is quite a heart-wrenching story.

Khosrowshahi was born to a massively wealthy Muslim family in Iran in 1969 and was slated to inherit his father’s business conglomerate after growing up. However, at the age of nine, his worry-free life came to an end when the Iranian Revolution was on the verge of tearing apart his family as part of a total overthrow of the wealthy class. Khosrowshahi’s parents decided to leave everything behind and flee the country. The family stayed briefly in southern France and eventually moved to the U.S. to live with a relative in New York.

Khosrowshahi started his career as an investment banker on Wall Street in the early 1990s. In 1998, he left investment banking for the media and internet industry. He quickly worked through the ranks at IAC, a holding company of hundreds of media brands, to become the company’s CFO. IAC acquired Expedia in 2001, and a few year later, Khosrowshahi became Expedia’s CEO.

In August 2017, Khosrowshahi forfeited a $184 million stock reward agreement with Expedia in order to join Uber. Uber reportedly paid him $200 million to cover the loss.

The founder of Ethereum has a name as enigmatic as his venture.

The Russian-Canadian coding wunderkind first learned about Bitcoin at the age of 14 and was instantly captivated. Three years later, he proposed the idea of Ethereum, a decentralized contract system with a more flexible blockchain infrastructure than Bitcoin.

Buterin dropped out of the University of Waterloo in 2014 to work on Ethereum full-time on a $100,000 fellowship from the Thiel Fellowship, a program created by venture capitalist Peter Thiel to fund innovative projects of students under the age of 23.

The ultimate unpronounceable name belongs to the inventor of Bitcoin, not only for its exotic sound but simply because it’s a completely made-up name.

Satoshi Nakamoto is the author of a 2008 research paper titled “Bitcoin: A Peer-to-Peer Electronic Cash System,” in which he proposed the idea of a decentralized currency system where transactions and currency issuance are based on group consensus, rather than a centralized authority. Although Bitcoin has since inspired the creation of a flood of blockchain-based digital currencies, the real identity of Nakamoto was never verified.

Nakamoto’s last digital appearance was a post on Bitcointalk.org seven years ago, in which he said he would go AFK (internet slang for “away from keyboard”) indefinitely. 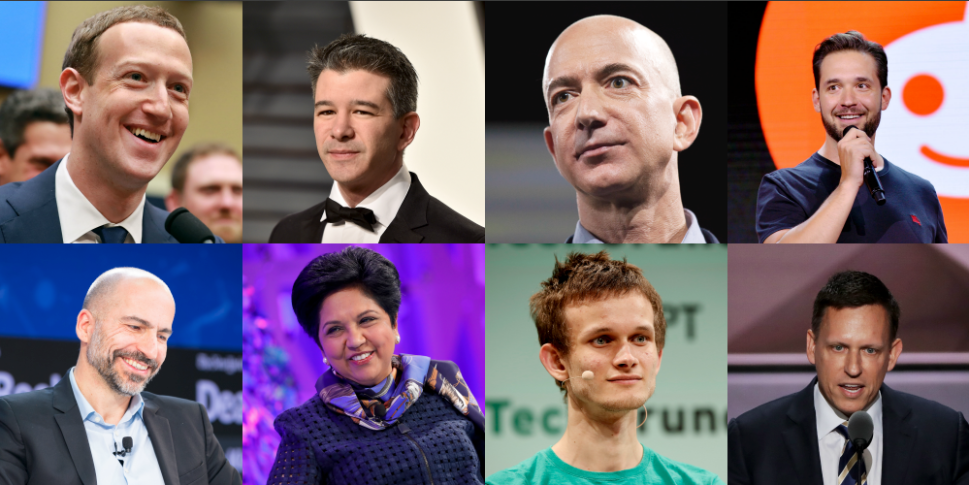