When a progressive political activist, a fringe 2020 presidential candidate and the president of the American Civil Liberties Union (ACLU) end up on stage together, it’s fair to assume fireworks will result.

And indeed, the energetic ‘Tech, Politics and Civil Rights” panel at the Collision conference in New Orleans encompassed everything from artificial intelligence to gerrymandering.

Moderator Cenk Uygur of the Young Turks started things off with his contrarian take on the Facebook privacy scandal.

“Cambridge Analytica is real and Russian interference is real, but it’s been massively overhyped by the mainstream media and so-called ‘reporters,'” he said.

ACLU President Susan Herman said Facebook and other Silicon Valley companies still have a responsibility to democracy, however.

The ACLU is tackling these problems on the ground—Herman said her organization has filed 138 lawsuits against the Trump administration.

Andrew Yang, an entrepreneur and Democratic presidential hopeful, is not as litigious—but he echoed Herman’s comments on the power of tech.

“Technology is directly responsible for Trump’s election, but not in the way people think,” he said.

Indeed, the biggest issue for Trump voters is jobs—and tech is taking work away in the areas where they live.

But unlike Bernie Sanders, Yang doesn’t think a $15 minimum wage would fix this problem.

“That would hasten automation and be a big catalyst to jettison many workers,” he said.

Instead Yang wants to put money directly into the hands of Americans through a monthly $1,000 “Freedom Dividend” for every adult between the ages of 18 and 64.

“We need to get around money in politics,” Herman said.

Uygur agreed, and he’s actually doing something about it. He started a political action committee called Wolf-PAC with the goal of passing a constitutional amendment to get corporate money out of politics.

“Corporations do not have constitutional rights,” Uygur said. “We have legalized bribery.” 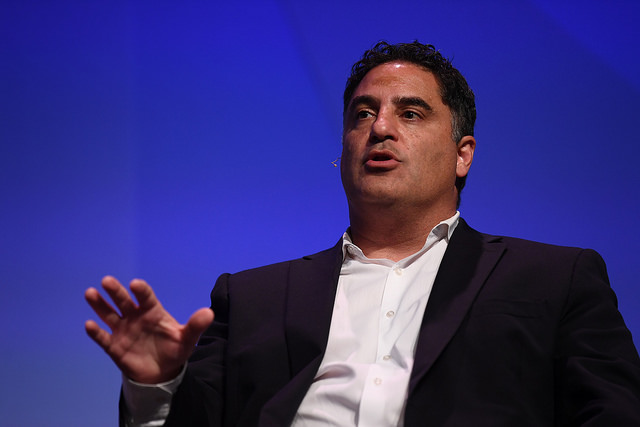