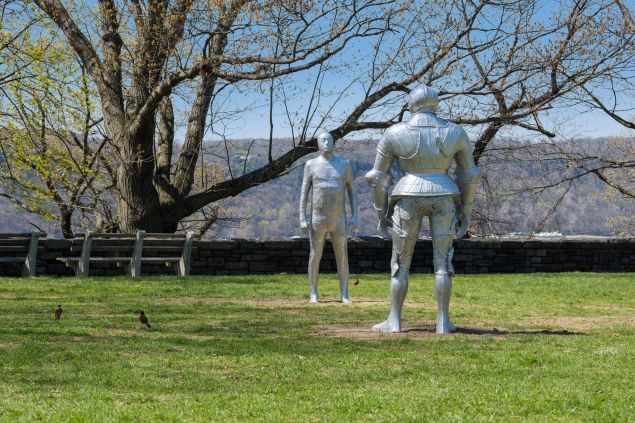 Most of us have been raised on folklore comprised of damsels in distress and the knights in shining armor that rescue them. Tales like Snow White, Cinderella and basically any legend of Arthurian ancestry force the female protagonists, for which they’re often named, into becoming passive subjects trapped by unfortunate circumstance or accidental sin. Just as problematic, however, is how these stories position their main men: as one-dimensional, emotionally unexpressive and largely interchangeable figures that must be “brave” and “tough” in order to succeed in their various quests for gold, glory and girls.

But this summer, artist Steinunn Thorarinsdottir is challenging these long-held, gender-coded assumptions through her site-specific public installation, “Armor,” at Manhattan’s Fort Tryon Park, where she has installed three androgynous metal figures in dialogue with suits of armor cast from custom 3-D scans of real suits in the Metropolitan Museum of Art’s collection. Standing opposite The Met’s Cloisters, a branch of the museum’s collection devoted to the arts, architecture and gardens of medieval Europe, Thorarinsdottir’s work not only allows visitors to engage with history in a whole new way (Yes, you can touch!), it also begs for an achingly necessary look at our own contemporary culture. 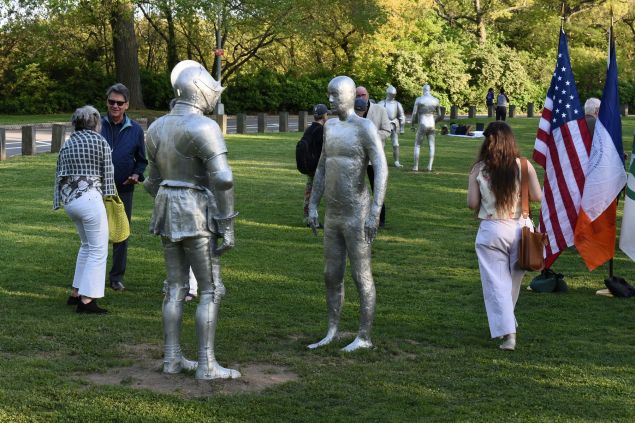 “I think our present day is not dissimilar to medieval times,” the artist told Observer. “We’re witnessing so much conflict—tribalism, endless power struggles between nations and peoples and genders—as well as many necessary revolutions, as seen in the #MeToo movement,” which cause many of us to question the values by which our male-dominated society operates.

Thorarinsdottir is known for her life-size naked, androgynous figures, especially in her home country of Iceland, where she is the first female sculptor to have had two solo shows at the Reykjavik Art Museum, first in 1982 and again in 1987. To create her ambiguous metal forms, she has used her son as a model for the last 20 years, which has proved a subtle but insistent way of interrogating how gender is largely instilled by social norms. Although these figures remain physically featureless, the artist explained that “In my work, I’ve always been interested in this element of family and the things that inform what we become.”

Despite this long-standing interest, Thorarinsdottir’s work at Fort Tryon Park marks the first time she has used a historical precedent to craft her sculptures. “We are all very busy looking to the future, and I want to see how my art in this moment can merge with history to help visualize that future,” she said. The artist became enamored with medieval armory while she was briefly living in New York in 2013, where she visited the Met often. She found the hard materiality but detailed craftsmanship of the suits alluring. “They were made for men to go to war in, they represent a collective symbol power based on violence,” she explained.

The suits’ display in a museum setting further compounded their importance, their preciousness within the institutional context transforming them into art objects that idealize the violent masculinity and valorizing power they were designed to express. “I thought, what if we could get them out of these glass cases and let people touch them—could they lose some of their power? Could they impart it to others who have been historically disempowered?” So Thorarinsdottir partnered with The Met’s arms and armor specialist Donald La Rocca to select three suits to 3-D scan in order to produce perfectly rendered replicas that could not only be seen outside of the confines of a museum, but also touched. 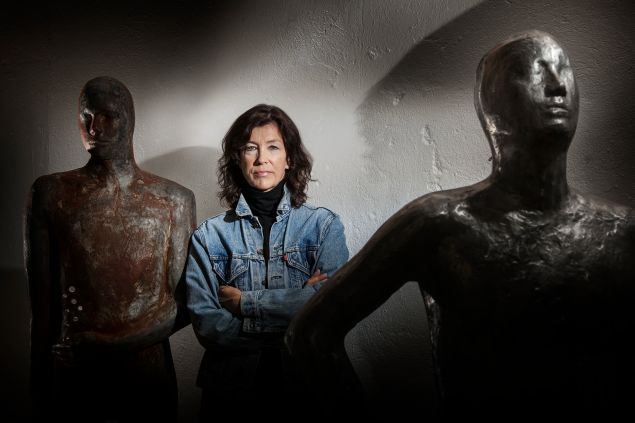 The artist also noted that, despite the hard exterior these suits of armor provided, they were fragile in their antiquity, “not to mention ultimately hollow”—a useful metaphor for the very outdated and limited understanding of manliness they represent. Her androgynous figures at Fort Tyron Park are placed in opposition of the armor replicas, as if they had just stepped out of them. They stand across from each other in the shadow of the Cloisters’ crumbling medieval architecture, as if to question the value of manhood embodied in the archetype of the knight, a savior by virtue of violence, that Western culture has propped itself up on for centuries.

Such an enquiry is especially relevant now in a time when violent crimes are largely perpetrated by men. Indeed, a recent study published in International Journal of Forensic Mental Health found that nine out of ten murders are committed by men. Melanie-Angela Neuilly, as professor of Criminal Justice and Criminology at Washington State University, has noted in an interview with HuffPo that the cultural conditioning of men in contemporary society is to blame for what’s become colloquially known as “toxic masculinity.” “We raise our boys with an acceptance that violence will be part of their behaviors (’boys will be boys’), while teaching them to repress all feelings except for anger (’boys don’t cry’), in a society which objectifies girls and women,” she told HuffPo. This, she believes, forces them to “replicate patterns they have learned during their childhoods, patterns which…are ultimately reinforced in a number of ways in a masculine culture of violence.” 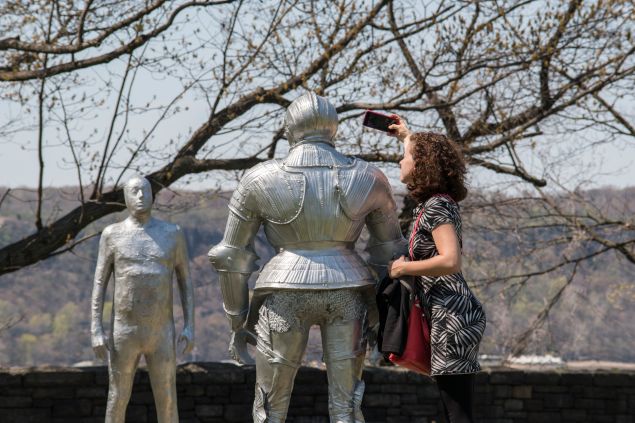 Thorarinsdottir explained that she sees armor as a materialization of man’s aggression and a testament to the violence that is central to our lives. But beyond their cultural significance, “these suits are also just extravagant forms of protection,” she said. The artist hopes that her androgynous figures, unburdened by gendered identifiers and ostensibly freed from the centuries-old outfit they inhabited, reveal the uncanny strength of the individual inside to redefine oneself. 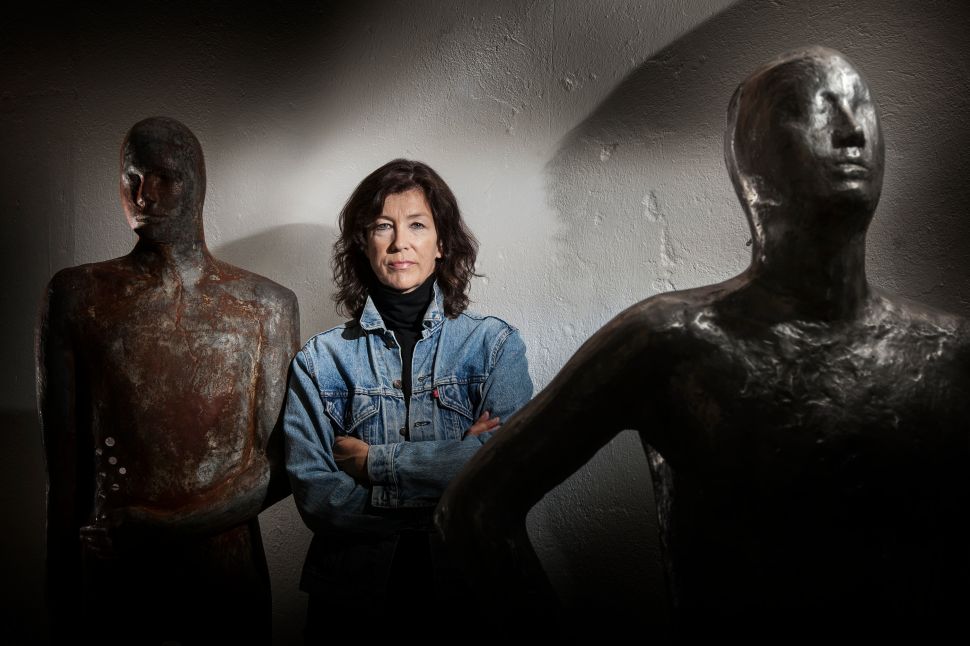