Two days ago, Kremlin-watchers worldwide were stunned and saddened to hear of the assassination of Arkady Babchenko, a Russian journalist and war correspondent who fled his homeland in early 2017, fearing for his life. As a prominent critic of President Vladimir Putin, Babchenko’s fears were wholly warranted, given how many Russian journalists and activists who got on the wrong side of Putin’s regime have wound up murdered, usually by never-identified hitmen, over the last couple decades.

Babchenko’s sad end, shot in the back outside his apartment in Kyiv, the Ukrainian capital where he had taken refuge with his family, seemed like a death foretold. Volodymyr Groysman, Ukraine’s prime minister, promptly blamed Moscow for the murder, a claim that was widely believed. Aleksandr Bortnikov, the head of Russia’s powerful Federal Security Service (FSB), dismissed Kyiv’s accusation as “bullshit,” but few outside the Kremlin’s walls believed him. After all, the Babchenko hit came less than three months after the near-murder of the former Russian intelligence officer Sergei Skripal and his daughter in England, an outrageously brazen act of state terrorism. After Skripal’s near-death, and the Western pushback it engendered, Western media was finally on the lookout for more assassinations of the sort the Kremlin calls wetwork.

Journalists from all over the world eulogized the martyred Babchenko, hailing his bitter opposition to Putin and his sordid regime, while recalling that Pavel Sheremet, a Belarusian journalist and Kremlin critic, had been blown up by a bomb placed in his car in downtown Kyiv just two years before. Who else but the FSB could be responsible for Babchenko’s murder? Harsh reactions from Western media to the Babchenko assassination felt like an effort to make up for their relative inattention to so many previous Kremlin hits on people whom Moscow disliked. Now, just a few days after Western governments publicly fingered the Kremlin as the culprit behind the murder of 298 innocents in the shoot-down of Malaysian Airlines Flight 17 over Ukraine in July 2014, it was time to call Putin and his murderers out.

Social media reactions were robustly impressive, with Babchenko being remembered as a fallen hero on Twitter and Facebook by tens of thousands of virtual mourners. “Babchenko Lives” banners appeared without delay, and the case looked like something the Kremlin might need to worry about. Western patience for Putin’s aggressive spy-antics has been waning for some time, and it looked like the FSB finally went too far with one too many a brazen killing in Ukraine.

Then, the next morning, Arkady Babchenko appeared before the cameras, quite alive. In a moment worthy of a reality TV show, Babchenko, flanked by representatives of Ukraine’s Security Service (SBU), explained that Ukrainian intelligence two months earlier had learned of a Russian plot to murder him. One month before, the SBU informed Babchenko of the threat, which originated with Russian intelligence. In response, they crafted an elaborate deception, including faking Babchenko’s death and fooling the media to expose the Kremlin’s murder conspiracy. In a surreal moment, Babchenko apologized to his wife, who had been left in the dark about the cover story. As SBU chief Vasyl Hrytsak explained, “We have prevented an attempted murder of Babchenko by carrying out a special operation. Thanks to this operation, we were able to foil a cynical plot and document how the Russian security service was planning for this crime.”

Hrytsak stated that the SBU had detained a Ukrainian national in connection with the plot. The man in custody, a former fighter with Russian-backed forces in occupied eastern Ukraine, was given $40,000 by the FSB to organize Babchenko’s murder: $30,000 for the killer and $10,000 for himself for serving as Moscow’s cut-out.

While Ukrainian patriots boasted of this cunning covert operation, taking understandable glee in fooling the hated Russians, who still occupy Crimea and a good chunk of eastern Ukraine four years after Putin’s forces invaded their country, this seems like a tactical triumph and strategic setback for Kyiv. It’s certainly commendable to stop Putin’s killers before they strike, and it’s vitally important to expose the Kremlin’s wetwork abroad (as this column has done many times over the last three years).

That said, playing the Western media for fools and taking advantage of their newfound interest in Russian terrorism abroad was terribly short-sighted. Kyiv desperately needs good press. With its military still recovering from two decades of post-Soviet dilapidation, Ukraine is in no position to take back its lost territory from the Russians. Provoking the Kremlin in battle would lead to a debacle like the one that befell Georgia’s reckless leadership in August 2008, when Russian brigades curb-stomped the unready Georgian military.

Time, here, is on Ukraine’s side, especially with Putin’s ugly, corrupt thugocracy seen by the West for what it really is, at long last. Diplomacy, not war, is the eventual way out of this morass. Therefore, cultivating a relationship with Western media constitutes a vital national security interest for Kyiv. To be blunt, how the global media covers stories is every bit as important as what they report. Narratives sometimes matter more than facts—and the narrative that helps Kyiv is that which illustrates Western-leaning Ukraine’s contrasts with unpleasant, dishonest, murderous Russia. For Ukraine, gaining the trust of Western journalists is worth its weight in gold, particularly with their country remaining in a frozen conflict with their much bigger, nuclear-armed neighbor.

Moreover, Kyiv has given Moscow a propaganda goldmine with its Babchenko deception. Putin’s regime lies nonstop anyway, and this gives Russia’s rancid lies a smidge of credibility. Kremlin outlets are already citing the Babchenko “resurrection” as reason to doubt the West’s version of the Skripal case. Kyiv has gifted Putin’s disinformation experts fodder for decades with the Babchenko ploy. Worse, more than a few Western journalists will disregard what the SBU says in future, recalling when they were made to look like fools before the world.

To conclude, there had to be ways of stopping Babchenko’s murder and exposing the Kremlin killers behind it without acting like Russians by deceiving the world in a cynical fashion. Ukraine’s future is with Europe, not Russia, but that means acting like Europeans—not Russians. Eastern Europe already has one country that cynically weaponizes lies and deception on a daily basis as a core component of its foreign policy. It doesn’t need a second one. 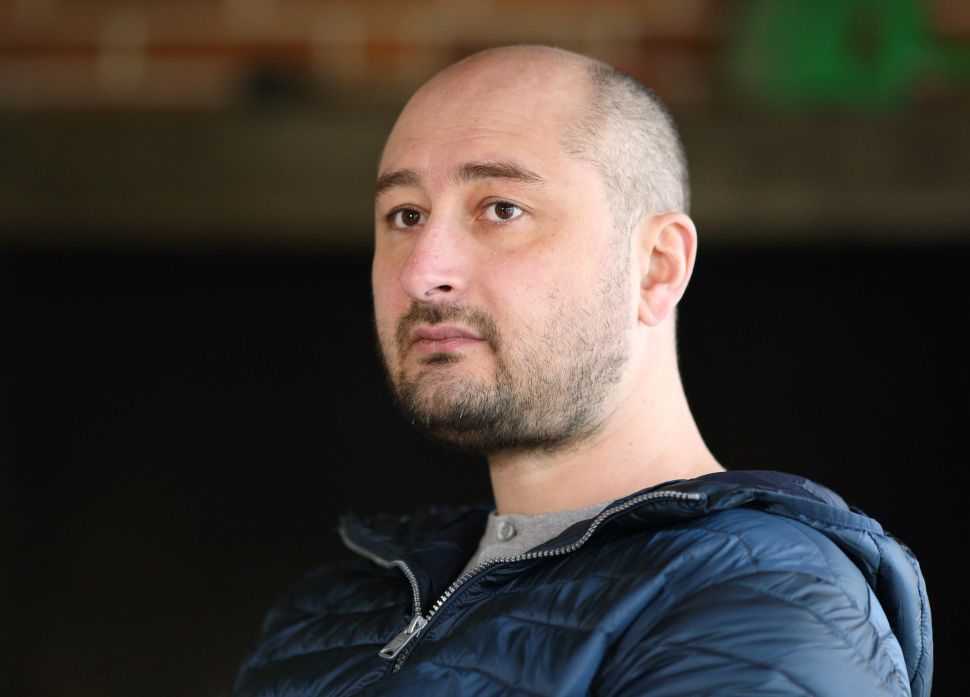