The reasons for the sudden resurgence in interest regarding this piece aren’t exactly clear. But given its newfound virality, we decided to dig in and see what exactly this piece got right and wrong about the World Wide Web.

As Mossberg pointed out on Twitter, 1996 was a very different era in online communication. Google, Facebook, Twitter, Skype and YouTube didn’t exist. The Safari and Firefox browsers were years away, as were the Mac, iPhone and iPad.

But many of the issues the Journal team warned about in the last millennium are still very relevant today.

Even in the early days of the internet, users were worried about privacy. The paper devotes one section of its piece to “fears about the amount of personal information available on-line” (yes, the word was hyphenated back then).

“You are increasingly being watched and tracked,” the Journal warned. “Every move you make on the Internet can be followed, and the information gathered can be used against you.”

Of course, the paper didn’t (and couldn’t) predict the rise of social networks whose very existence revolves around invading privacy, as the recent Facebook congressional hearings proved. And other privacy issues like facial recognition were the stuff of science fiction back in 1996.

But the most eye-opening section of this story is the “Tech Roundtable” moderated by Mossberg. The panelists include

All three men have since gone on to become venture capitalists.

The first indicator that times have changed comes when Case points out that only one out of every seven households are connected to the internet.

Now 84 percent of U.S. households own a computer, and 73 percent have a broadband connection. Access still needs to improve (especially in rural areas), but it has increased by leaps and bounds in the last two decades.

Silverberg also pointed out that “mass awareness” of the internet was increasing, with URLs on billboards and local news features on the “website of the day.” Of course, now those news stations are conducting Twitter polls.

At one point in the discussion, Mossberg doubts that the internet will reach the scale of TV and become mass media.

But thanks to services like Netflix, Hulu and HBO Go, hundreds of thousands of consumers have ditched their TVs and are simply watching shows on other devices.

The conversation is on better footing when discussing the shifting business model for websites. Silverberg claims that email is more “compelling” for communications than content distribution.

But Andreessen then points out that many customers have signed up for email newsletters, in which Netscape sends them content from sites like The New York Times.

Of course, in the intervening 20 years, media companies eliminated the middleman and started sending out these newsletters themselves, creating a new revenue stream.

The one issue all three men seem to agree on is government regulation of tech companies. When Mossberg asked if this is a good idea, each one of them said “no.”

Obviously any tech feature written in 1996 seems somewhat dated now—and some sections of the Journal story are hilarious in hindsight.

For example, the paper points out that with so many websites, “it’s hard to know which ones are really worth a visit.” That was in an era when there were “only” millions of webpages—now there are 1.8 billion.

But issues like privacy, government regulation and the need for increased revenue are still being talked about today as much as they were back then.

Rich Jaroslovsky, an Observer contributor who was managing editor of the online Journal in 1996, said it was “a kick” to see the post get a second life.

“These aren’t ‘old’ issues that have come around again in new guises,” he said. “They are the exact same issues we were grappling with in 1996. This isn’t a case of everything old is new again. It means that after 22 years, we still haven’t solved fundamental problems posed by the medium.”

So maybe that’s why this page is suddenly so popular again: because it proves that the more things change, the more they stay the same. 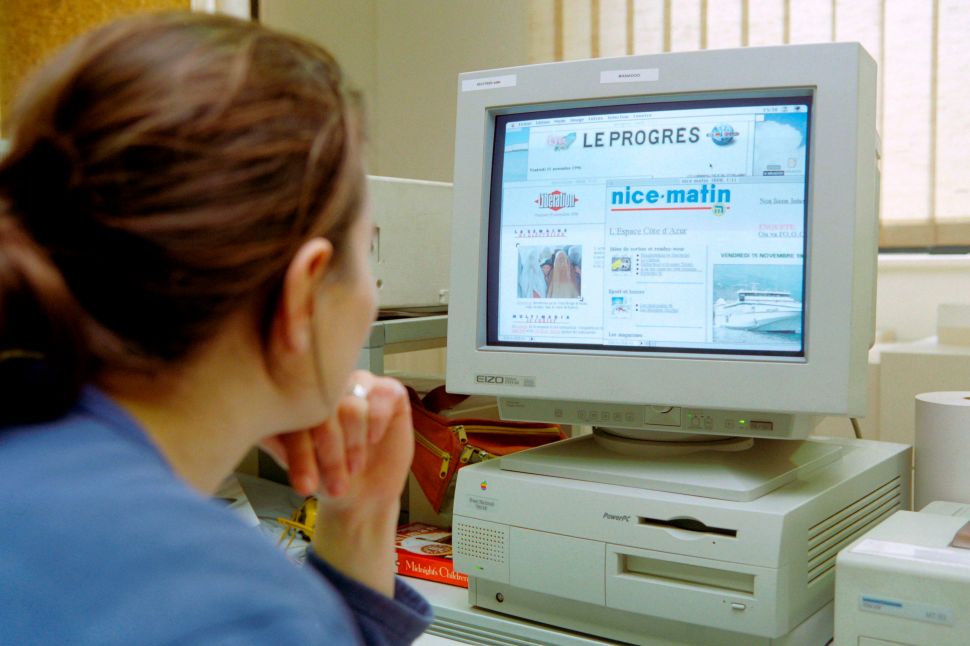