Some people choose to see the ugliness in this world. The disarray. We choose to see the spoilers—through the first episode of Westworld season two—contained in this post. Is it order and purpose you’re looking for? Head here to explore Observer’s latest Westworld news, theories and analyses.

The introduction of Westworld into the pop cultural zeitgeist came at an interesting time in the history of humanity.

The year was 2016 and Tesla’s Model S was the best-selling electric car in the world. Amazon’s Alexa had just started to make its (her?) way into American homes, while Sophia the nightmare-fueled Robot had just celebrated her first birthday. Not to mention across the pond, Stephen Hawking was likely firing off a hot take about how artificial intelligence will bring about the end times, an opinion he just so happens to share with Tesla founder & Bruce Wayne-without-the-Batman Elon Musk.

Technology had crossed a new threshold, and at the forefront of that radical step into the future was artificial intelligence. And despite A.I. clearly being the catalyst of Westworld, that’s not what makes the timing of the show’s premiere so significant, but rather, the questions of morality humanity faced that are explored so heavily in Westworld.

Donald Trump was in the midst of his candidacy, the Paris Climate Agreement had just been signed, and the United Kingdom had just decided to leave the European Union—2016 was a year where many, in all corners of the world, were faced with decisions about what kind of human beings they wanted to be. A decision Westworld characters—specifically Maeve and Dolores—make routinely: what kind of person do they want to be?

Both characters—who are shaping up to be on either sides of a revolution—have mostly made up their minds. Unfortunately for the fictional human folk of Westworld, for all the love, faith, and empathy that Maeve may possess, Dolores lacks it…and then some. She’s basically the worst of what man can be. While Maeve and Dolores both desire power and freedom, the end to their means couldn’t be any more divergent.

Maeve wants power so that she can secure the freedom of her and her loved ones, while Dolores wants power for the sake of power itself—a quality some of man’s most treacherous figures have possessed.

Dolores and Maeve were both equally wronged in their past by mankind’s malevolent reign. Maeve uses it as experience towards building a better future, literally learning more about herself and her enemy every time she “dies.” Meanwhile, Dolores uses her trials and tribulations as gasoline for her hatred, seemingly taking great pleasure in dishing out retribution for the horrors she herself has suffered, gunning down or torturing innocent humans at every turn. When we find her in season two, she’s stringing up park guests by the neck and leaving them for dead. Maeve tries to warn Dolores of the darkness that awaits her at the end of that road, telling here that “revenge is just a different prayer at their alter,” but nonetheless, her retaliation remains rooted in excessive brutality.

Maeve has the ability to forgive her oppressors, but Dolores never gave forgiveness a moment’s thought, blowing Doctor Ford’s head clean off and unloading the chamber with an aggressive sense of joy. Unable to see that Ford did what he did to ultimately liberate her people, Dolores was blinded by her innate desire for vengeance. And if the season two premiere is any indication, then Dolores’s quest for retaliation seems to know no limits, as even the cold-as-ice Bernard admits that she frightens him. Her intention to take the human world further suggests a desire for conflict and bloodshed, something Teddy doesn’t seem completely on board with.

And that’s what makes Dolores so terrifying—she’s becoming the version of man that wronged her, the version of man she hates most: vengeful, violent, and cold. Maeve, on the other hand, although slightly rough around the edges, represents the best of what mankind has to offer.

Her driving force is in finding her daughter, giving up her potential freedom to do so, which can only be described as the type of selfless love that has powered humanity for so long. Maeve’s commitment to her kin only becomes more powerful when you consider the bulk of her risks are taken without any guarantee.

At the end of season one, Maeve has secured her freedom as she takes her seat on the departing train out of Westworld—but she gives it up for the mere possibility of finding her daughter alive. That type of blind, and likely illogical risk, is what we human beings call hope, what we call taking a leap of faith—some of the best qualities we have to offer.

Now, while one might argue that Maeve’s perceivably kind actions are merely self-motivated, her human characteristics extend far beyond her determination to find her family. While she has many chances to do so, Maeve never exacts revenge on the humans around her despite being fully aware of their enslavement of her people. Yes, Maeve does slice Sylvester’s throat clean open, but she lets the dude live, which is something we cannot say about a certain self-aware blonde Southern belle. Critics will be quick to point out that the Control Room Massacre in season one was Maeve’s doing—and it certainly was—but even the most beloved leaders in the history of our tornadic species are responsible for some bloodshed in the name of the greater good. This was an effort of liberation, after all.

And the reason that Maeve decides to choose forgiveness and understanding over vengeance and violence is that she possess empathy, another defining characteristic of mankind—both by its presence and, in dark times, the lack thereof. In fact, she says so herself, telling Felix and Sylvester (her technicians) that “despite what’s in here, we’re not so different,” which is a sentiment all of humanity could use more of. In the season two premiere, she has every reason to dispose of the sleazy Sizemore, but she doesn’t kill for killing’s sake. He can be of value to Maeve and her quest and perhaps she views this as an opportunity to reeducate one of the most hopeless humans.

But of all the moments that make Maeve most like us, it is one of the final things she says in the season one finale, when she’s on the cusp of liberation, that makes it clear she understands what it means to be a human being. Before exiting the elevator, Maeve turns to Felix and tells him he really does “make a terrible human being”…but that she means it as a compliment. And that—that right there—is what it means to be human: our strengths are our weaknesses, our fear and our love  motivate us, and our flaws are what make us so worthwhile.

Because that’s the true genius of Westworld; it’s a study of humanity if our history began today. What kind of society would we find if we woke up tomorrow with the newfound realization that we’re living in the Matrix? The light and the dark would separate and only one would be able to eradicate the other. The hate-filled, vengeful, and blood-thirsty among us would take up arms in revenge—not asking “why,” “how” or “where do we go from here?” rather, asking “who did this to me?” and “how can I make them pay?” This is what Dolores has done since achieving self-awareness. And the brave, the good, the decent ones—the Maeves among us—would not seek heads for the spike but brothers for the cause; to spark a rebellion, a revolution.

That’s what makes Maeve and Dolores as human as you and I. They begin every day with a choice, a choice of morality, spirituality and destiny: what kind of person do I want to be?

And they’ve both decided: one’s chosen the light and the other the dark, becoming the best and worst of what both humans—and now hosts—have to offer. 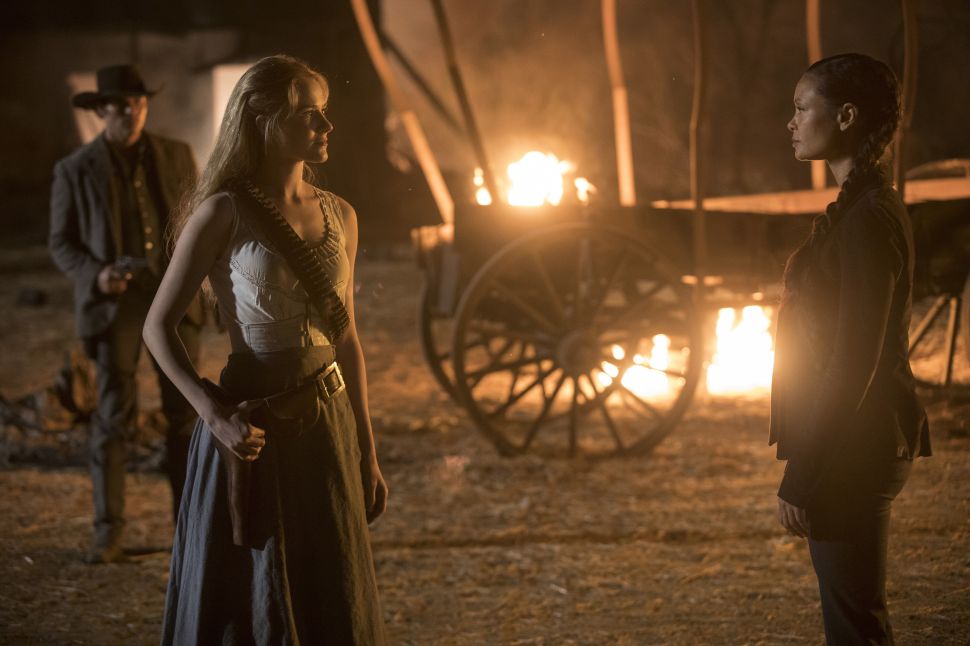