Some people choose to see the ugliness in this world. The disarray. We choose to see the spoilers—through the first three episodes of Westworld season two—contained in this post. Is it order and purpose you’re looking for? Head here to explore Observer’s latest Westworld news, theories and analyses.

Another week, another episode of HBO’s Westworld, which means another round of rampant ramblings, salacious speculation and all around android antics. Westworld has always been a mystery box hidden within a riddle and stuck between alternating robot massacres and sex parties, which is why we’re here to try to focus on (and answer) the show’s most pressing questions.

The third episode of season two, “Virtù e Fortuna,” is packed with eyebrow raising uncertainties that provide a running theme for the episode. It also most closely resembles a plot-moving installment of Game of Thrones with its content and structure.

Let’s bring ourselves back online and dig in.

What Is the Meaning of “Virtù e Fortuna?”

The episode draws its title from The Prince, a 16th century political treatise written by none other than Machiavelli (his cynicism towards mankind can often been found wafting off Westworld). There are a ton of parallels to the show to unpack here that serve as a critical lens to the episode.

The Prince puts forth a comprehensive philosophy that attempts to explain human action and human failure by exploring the relationship between virtù (drive, talent, ability), fortuna (luck, fortune) and free will.

Staying with the Adam and Eve metaphor suggested in last week’s “Reunion,” as Dolores and Teddy uncover further truths about their world, their base of knowledge increases. With knowledge comes an understanding of good and evil and a choice of which path to take. The truth is the forbidden fruit.

In The Prince, Fortuna is a goddess derived from classical Roman mythology and is portrayed positively as the provider of luck and abundance. However, her symbol—a turning wheel—was ridden to the top by people who were then thrown to the bottom at the next turning.

Have we possibly seen a version of that symbol in Westworld already this season?

Fortuna represented the fleeting wonder of the world that religious folk at the time tried to evolve beyond by focusing on virtuous good, forces that would grant them eternal life after death. Generally speaking, Machiavelli used Fortuna to detail the aspects of life that humans cannot exert their will upon, which connects directly to success and failure. That goes double for the hosts and humans of Westworld.

Virtù is the opposing force to fortuna; the human component of ambition, and the most vital quality for a ruler in Machiavelli’s eyes. He even suggests that these forces can overcome the random fortune of life when applied correctly.

Dolores is the show’s embodiment of virtù, spearheading the host’s action to accomplish her goal. By Machiavellian standards, that would make her the best ruler.

But she needs to be careful about what kinds of leader she’s creating. Boundless slaughter, betraying her own kind, testing Teddy’s loyalty through acts of brutality. She can be a blatant hypocrite, preaching about free will yet commanding entire armies to do her bidding.

In one of the episode’s many echoes of HBO’s other massively popular hit show, Dolores is attempting to build a new world while making the same mistakes as would-be human conquerers have before her. Tywin Lannister’s house of cards came tumbling down due to his cruelty; the foundation of change cannot be built if lessons of the past continue to be ignored.

Maeve’s sympathy towards Sizemore and the protection she offers him, while exemplifying the best of the host’s development, stands in stark contrast to Dolore’s progression. We don’t yet know if the rancher’s daughter is Jesus or Lucifer in Westworld‘s deliberate religious subtext.

Machiavelli believed that fortuna and virtù are inextricably linked.

The Prince posits that virtù is wasted when there isn’t any opportunity, and opportunity is wasted without virtù; they exist together in a symbiotic relationship. It isn’t entirely possible to shield oneself from the fickle nature of fortune, but through drive, ambition and ability, it is possible to ride out the waves of change and carve out your own path to an extent.

Every character is making a go at that very idea.

But here in lies the contradiction of his overall philosophy. Machiavelli concludes that human beings do have free will; if they didn’t, talent and ambition would have no place in the world. God wants humans to take an active role, not be a disconnected passerby, similar to how creators Ford and Arnold want the hosts to discover their own sentience and seize their freedom. But Machiavelli also believes fortuna (luck) plays a crucial role in life and that destiny shapes aspects of our world and that neither can exist without the other.

Will Dolores’ unrelenting action lead her to accomplish her goals or, given man’s nature, are the circumstances designed against her far too insurmountable? What does the title say about mankind as well? Our own creations are have set out to destroy us; both action and fortune have coupled together to spawn a threat to our existence.

What Are the Other Parks of ‘Westworld’?

Tonight’s cold open gave viewers their first look at The Raj, the India-themed world, which fans began speculating about as soon as that Bengal tiger showed up in the season two premiere. The final shot of the episode was also the second tease for ShogunWorld, the Samurai-laden feudal Japan setting we saw briefly last season.

The surprise opening was a great example of how creatively Westworld approaches exposition—plot elements that need to be explained to the audience—and world building. Normally, these are accomplished through clunky dialogue and obvious references that are as interesting as that Ted Talk you downloaded six months ago and still haven’t watched. But Westworld‘s explanations are a bit more sophisticated, educating the audience while introducing new characters and expanding the show’s horizons. More show than tell.

This season’s fifth episode will be set almost entirely in ShogunWorld, which is sure to be illuminating.

Just how sentient are these hosts? There are several examples in ‘Virtù e Fortuna’ that make you question how woke these bad boys really are.

Charlotte and Bernard re-program Rebus even though he seemed to have developed consciousness previously. Maeve’s mastery of mechanical magic doesn’t work on members of Ghost Nation, which lends some credence to the Override Theory and could suggest that Maeve is still operating on a pre-programmed loop. Teddy can’t remember who Abernathy is, even though full sentience should give him access to his full range of memories. Hector’s impassioned speech was written by Sizemore.

There seems to be varying levels of consciousness for each host, which is what puts our two heroines at the top of the food chain. But the nature of humanity remains a cloudy proposition as we have to question what makes us and them alive or human.

What Kind of Show Does Westworld Want to Be?

In the first season, Westworld became too lost up its own where-the-sun-don’t-shine at times. This season, creators and showrunners Jonathan Nolan and Lisa Joy have pulled way back on the mind maze of it all.

‘Virtù e Fortuna’ felt like an episode of Game of Thrones that is concerned with moving the story forward. Dolores was scheming and plotting, concocting alliances and double-crossing allies so ruthlessly that Cersei Lannister would raise her wine glass in approval. Maeve travelled vast distances to a necessary new setting that sets up a much anticipated new plot line, like just about every character in GoT at one point or another. Bernard’s journey continued to tease out snippets of reveals that piece together the timeline.

Tonight’s installment felt far more like a traditional blockbuster drama (albeit with more bells and whistles) which has both its pros and cons. It may not stoke the fires of conspiracy, but it does push the story forward. Maybe fans can expect more of a straightforward Westworld moving forward for better and for worse. 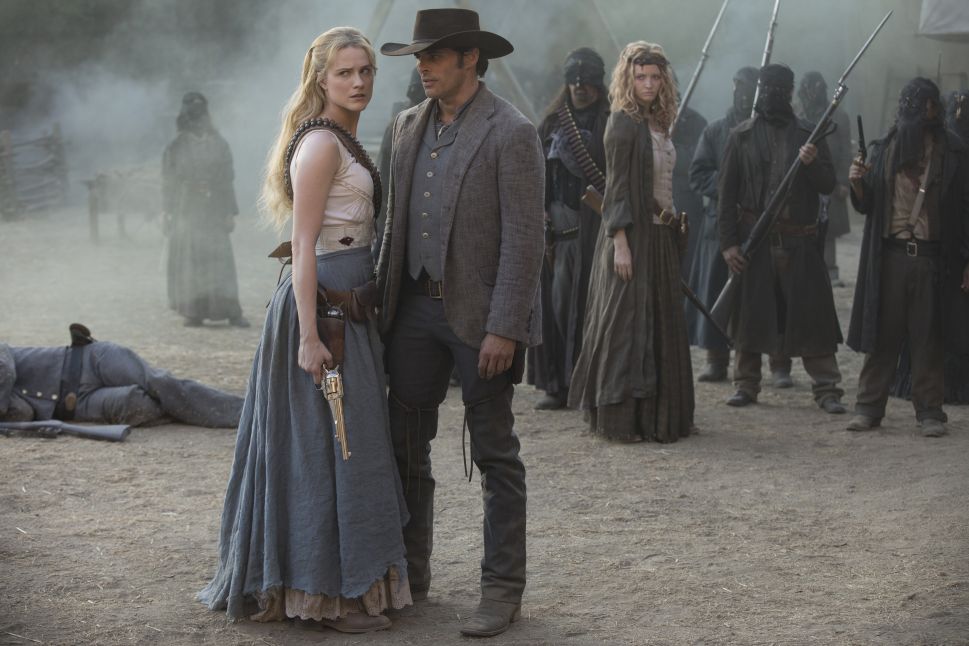