After forays into commercial real estate, nightlife and fitness centers, the communal empire is eyeing a more controversial arena: politics.

“A record breaking number of female candidates are running this year,” WeWork’s Head of Public Affairs for the East Coast Lauren Fritts told Observer. “It makes sense to enter in this environment with them.”

“Community is the number one focus in the WeWork walls,” added Fritts. “They are a nonpartisan group. That was the main thing. We want to make sure WeWork is a place where people from all sides of the aisle feel welcome.”

Like Ready to Run, VoteRunLead is a nonpartisan organization offering mentorship and training for female candidates. The difference, however, according to the nonprofit’s founder and CEO Erin Vilardi, is that the organization operates year-round, while offering continued support through its alumni network; there is also an emphasis on rural organizing through partnerships with the National Farmers Union and the Women, Food and Agriculture Network.

“We’re not just doing one-off events. We’re holding the hands of women who are looking two election cycles away or a five-year plan or trying to accelerate in six months and file before a 2018 deadline,” explained the founder, noting that Omar received training from the organization in 2014 and 2015 before becoming a trainer.

“Really, we want to find creatives and community organizers and make sure we’re diversifying the skill-set of women who get into public office,” added Vilardi.

WeWork and VoteRunLead will host training sessions this summer in New York City, Miami, Austin and Chicago. Topics will include fundraising and public relations strategy, among others.

“One thing WeWork is doing is that we consider ourselves a ‘New Town Hall,'” said Fritts. “People come into our space and talk about the news of the day. This is a place where people come with a purpose and a driven goal.”

The concept of a “New Town Hall,” when helmed by industry disrupters like Facebook and Twitter, has lead to a spike in disinformation and concerns over censorship. Although WeWork insists its partnership with VoteRunLead is nonpartisan, Gillibrand’s office told us that the New York senator views organizations like VoteRunLead as complimentary to pro-Democrat organizations like EMILY’s List.

“Women are running for office in record numbers, working with organizations like EMILY’s List, and Higher Heights, and VoteRunLead, and Run for Something—and they’re winning!” exclaimed Gillibrand at the Women’s Leadership Forum on May 18th.

Town halls and public forums in the age of interconnectivity drive conversations and allow citizens to exchange knowledge and resources.

Correction: An earlier version of this article incorrectly stated there were no Republican speakers in WeWork and VoteRunLead’s event last week. There were three. 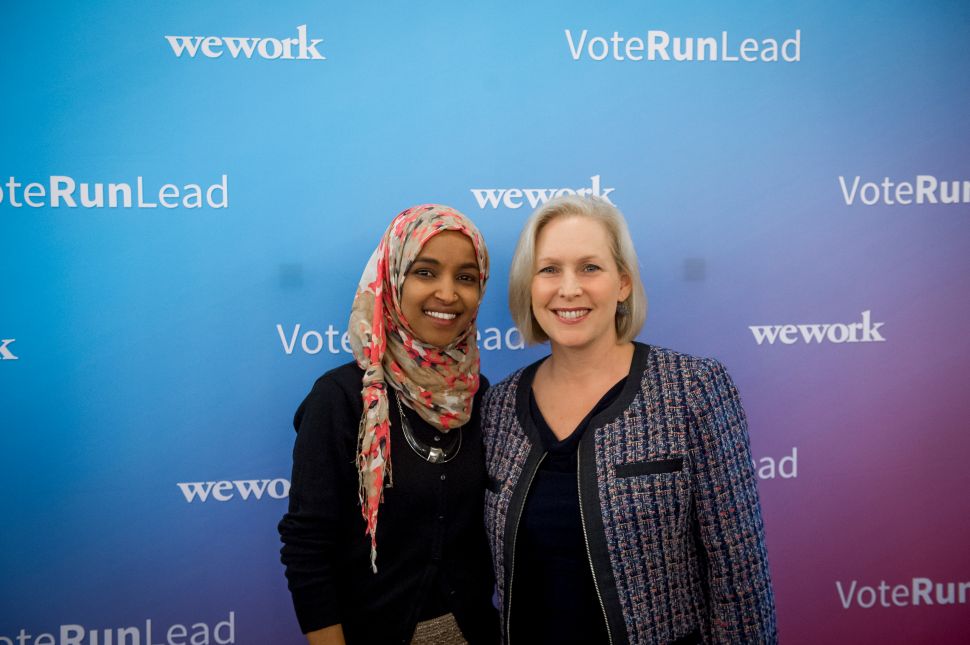