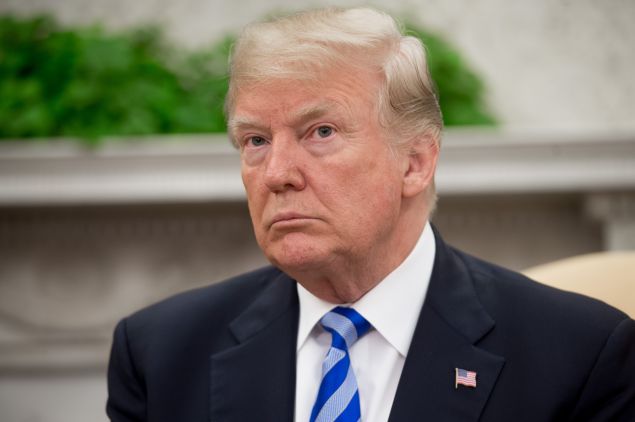 President Donald Trump in the Oval Office of the White House in Washington, D.C. May 16, 2018. SAUL LOEB/AFP/Getty Images

Joseph Goebbels, the Nazi propaganda guru, is infamous for his assertion that the bigger the lie, the more effective it is—particularly if you stick to it. It’s not hard to demonstrate that mixing fact and fiction together to spin a narrative, what is properly termed disinformation, can be mightily effective at removing inconvenient facts from public discourse.

With each passing day, President Donald J. Trump’s defense of his rumored Kremlin ties demonstrates this reality, while constituting a mounting exercise in what mental health professionals term projection. That is, rather than admit his own misdeeds, Trump merely passes them on to his accusers. Whereas the president for more than a year insisted there was “NO COLLUSION” with Moscow, of late he has taken to accusing Special Counsel Robert Mueller and those investigating him—particularly the Federal Bureau of Investigation—of being the “real colluders,” as O. J. Simpson might put it.

In this telling, which the White House and its media minions push hard daily, Trump is the innocent victim of a far-reaching conspiracy conjured up by Democrats to keep him from winning the Oval Office in 2016. This plot allegedly consisted of invented evidence designed to malign the reality TV star-turned Republican nominee.

Facts are immaterial to this administration, however, and the painful truth understood by anyone versed in the ways of the Kremlin, particularly under the leadership of President Vladimir Putin, is that the entire Trump campaign in 2016 was an extended exercise in collusion with Russia. While the details of quid pro quos are unknown to the public, that Trump’s run for the White House was chockablock with efforts to enlist Kremlin help needs to be explained.

Simply put, no other major candidate for president has witnessed oddities such as secretive meetings with known Russian intelligence operatives to get dirt on their opponent, much less inviting (another) known Russian intelligence operative to the GOP convention to help steer the party platform more to Moscow’s linking. Team Trump’s protests to the contrary, none of this is politics-as-usual in our country. Rudy Giuliani and other Trump surrogates are trying hard to normalize such misconduct, but a whole raft of federal laws on espionage and political campaigning dictate otherwise.

“Blame the other side for what we’ve actually done” isn’t just an exercise in psychological projection, it’s the espionage modus operandi of the Russian spies whom the Trump campaign had so many odd, unexplained dalliances with on their way to the White House—which, after all, is the subject of Mueller’s now-year-old investigation. It merits asking whether these similarities between Russia’s and Team Trump’s strategies are coincidental.

To understand how we got here, it helps to look back a bit. For a few decades in the middle of the last century, another Mueller—Heinrich Müller—was the most wanted man on the planet. During the Second World War, Müller headed the feared Nazi Secret State Police, known as the Gestapo, and therefore had a direct hand in the SS’s genocidal actions across occupied Europe. Müller had a front row seat to the Final Solution and was a fully witting accomplice to the murder of millions of Jews, Slavs, Gypsies, and others deemed “sub-humans” by the Nazis.

In April 1945, as the Red Army closed in on Berlin, Müller hunkered down in the Führer Bunker and waited for the end, proclaiming he would never give up the fight and never be taken by the Soviets alive. Müller celebrated his 45th birthday on April 30, the day Hitler committed suicide in the bunker, and then he promptly disappeared. He was last sighted late on May 1, only hours before the last German troops in Berlin surrendered to the Soviets—at which point he seemed to vanish from earth. He became the only top-rank Nazi war criminal to escape justice; all the others either died at the war’s end, usually by their own hand, or went into Allied captivity to face trials and, most often, execution.

Tracking down “Gestapo Müller,” as they called him (Müller was such a common German surname that there was another SS general named Heinrich Müller), therefore was a very high-ranking priority for Allied intelligence at the end of World War II. Frustratingly, his trail ran cold almost immediately. U.S. Army counterintelligence teams scoured Central Europe but came up with no firm leads, only unsubstantiated accounts of Müller popping up here and there. Smart money soon said that Gestapo Müller must have died in Berlin in early May 1945 under unclear circumstances, though there was no evidence to prove that.

In the confusion about his whereabouts, while fantasists placed Müller deep in the jungles of South America along with half the Nazi hierarchy, some in Western intelligence began to suspect that the Gestapo boss was in Soviet hands. Certainly, Moscow would have liked to exploit Müller, who as head of the Nazi Party’s personal spy agency had access to all the former regime’s secrets. Tantalizing hints emerged in the years after the war, indicating that the world’s most wanted man was in Moscow, and for want of contrary evidence, the CIA by the 1950s was operating on the assumption that the KGB got control of Gestapo Müller.

In 1961, Michael Goleniewski, a senior officer in the Polish military counterintelligence service, defected to the West. During his CIA debriefings, he explained that Soviet spy partners told him they had taken Müller to Moscow. Although the CIA couldn’t confirm Goleniewski’s account, that he had extensively participated in interrogations of captured Nazi officials after the war gave it credibility—as did the fact that he was far from the only East Bloc defector during the Cold War to claim nebulously that the Kremlin had Gestapo Müller.

Interestingly, just as the circumstantial case that the Soviets had him mounted, so did public claims that Müller was really in American hands. By the mid-1960s, it was standard tabloid fare, especially in West Germany, that Washington took possession of Müller at the war’s end and was continuing to hide him from justice, so to protect its ugly secret. Evidence for this hypothesis was nonexistent, yet in the absence of any public information about his whereabouts, it became a trope on the conspiracy-minded Left that the CIA had Gestapo Müller.

Even the Cold War’s end and the concomitant collapse of the Soviet Union shed minimal light on Müller’s fate. By the 1990s, he would have been a nonagenarian, if still alive, but that did not cease interest in his sensational case, and unsourced stories continued to appear asserting that the Gestapo chief was lounging away in secret somewhere in America. That viewpoint was pushed hard by a strange book published by a minor, fringe press in 1996 that purported to be a record of Gestapo Müller’s interrogation by U.S. intelligence in the late 1940s. The author, Gregory Douglas, claimed to have known Müller since the 1960s and that the wanted man had given him a copy of his interrogation, with the proviso it could not be published until after the Gestapo chief’s death.

Legitimate historians denounced Douglas’ book as an obvious fraud, and investigation soon determined that the author was really Peter Stahl, a conman who has gone by numerous aliases while spouting neo-Nazi beliefs that were pleasing to the Holocaust revisionist crowd. Stahl had been pushing propaganda about Müller and his alleged new life in America as far back as 1963. He was known to U.S. counterintelligence as a disseminator of Kremlin disinformation to boot.

In response to the Douglas/Stahl book and the uproar surrounding it, the CIA in 2001 released a trove of intelligence documents about Gestapo Müller and its half-century hunt for him. Its conclusion was clear-cut: “The Central Intelligence Agency and its predecessors did not know Müller’s whereabouts at any point after the war. In other words, the CIA was never in contact with Müller.” What Langley revealed was sufficient to silence all but the most conspiracy-minded readers. The obvious answer, then, was that the Soviets had Müller all along.

This was proven beyond a reasonable doubt by the legendary CIA officer Pete Bagley, who divulged his findings in his last book, published in 2013, just months before his death. Bagley’s last op, undertaken many years after his retirement from the spy business, encompassed extensive research, analysis and interviews with former KGB officers, his Cold War opponents. He concluded that Soviet intelligence for decades had systematically planted disinformation in the West, asserting that Americans had the world’s most wanted man to distract people from looking at the Soviet Union—which had possession of Müller beginning in May 1945. Douglas/Stahl had been a regular conduit for these lies for more than 30 years, culminating in his wholly fraudulent 1996 book.

We don’t know what happened to Gestapo Müller, though he’s surely been dead for many years now. To obscure the unpleasant fact that the Kremlin had hidden the most wanted Nazi war criminal from justice, preferring to exploit him for intelligence purposes, Moscow blamed the Americans—a lie that some Westerners believed because it suited their biases. As Team Trump chooses to claim that up is actually down, that the real conspiracy is the one undertaken by people trying to unravel the president’s secret links to Moscow, they are engaging in a dirty and dishonest spy game that was perfected by the Russians long ago.

Whether the similarities in strategies are merely coincidence needs further examination. Yet again, disinformation seems to be working, at least on people who find the president’s narrative pleasing. The way things are going, with the president’s tweets becoming more unhinged and fact-free by the day, it may not be long until Trump’s superfans “discover” that the special counsel whose investigation is closing in on the White House and the missing Gestapo chief have the same surname and allege foul play. 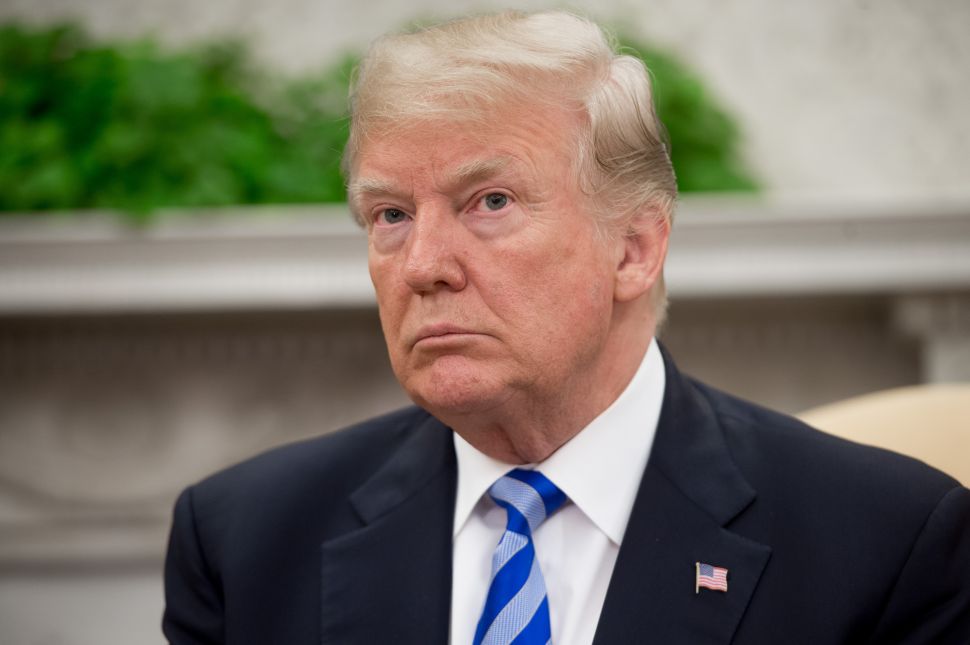