It’s no secret that the Trump administration, in office for almost 16 months now, has a devilish time filling top positions. An unprecedented number of plum jobs in our nation’s capital, including senior ones of the kind that Beltway wannabes fight hard for, don’t have people in them. Here, White House laziness and its selection of troubled candidates who have difficulty getting confirmed have both played a role. It seems likely that some of these jobs may never get filled as long as Donald Trump is our president.

Even many ambassadorships remain unoccupied. Seemingly, it’s the Washington custom to dole these out to friends and major donors rather quickly but even here Team Trump has been lackadaisical about appointments. Take the case of Germany, a key ally and the European Union’s most important country. Only this week did our new ambassador report for duty in Berlin, following an extended confirmation saga that lasted nearly a year.

The Senate was in no hurry to give the nominee, Ric Grenell, its endorsement, leading to right-wing charges that this had something to do with the fact that Grenell is openly gay. There’s no evidence for that accusation, and it’s not exactly clear why it took the Senate so long to approve Grenell, though it may have something to do with his lack of diplomatic qualifications.

Trump appointed him because he was an early endorser of his candidacy, and Grenell, a Fox News regular, has been a vehement public defender of the increasingly beleaguered White House. His sole relevant experience was serving as spokesman for the U.S. ambassador to the United Nations from 2001 to 2008. In that role, Grenell, a right-wing ideologue, was noted for his tenaciousness with the media, leading some of them to memorably describe him as “unbearable,” “rude,” “arrogant,” and a “bully.”

Over the past decade, Grenell has continued acting that way, especially on Twitter, where his pugnacious dealings with reporters and others have been a subject of both scorn and laughter. In 2012, he deleted nearly a thousand of his most offensive tweets when he served very briefly as spokesman for the Mitt Romney presidential campaign. Since then, Grenell’s online habits have continued and, while that may have been disqualifying in the past, Trump had no qualms about appointing a fellow angry Twitter troll to a sensitive diplomatic post.

Although Germany is a close ally, Washington’s relations with that pivotal country have been touchy in recent years. German affection for President Barack Obama, once deep, soured over two terms, while Trump is widely loathed in Germany as an uncouth and ugly American, half-bully and half-fool. We need a skilled ambassador in Berlin right now. Yet, in a manner unprecedented in the annals of American diplomacy, Grenell reverted to his Twitter trolling and managed to deeply offend his hosts on his very first day in Berlin.

On Tuesday, within hours of getting down to work, Grenell tweeted out support of the president’s ditching of the Iran nuclear deal: “U.S. sanctions will target critical sectors of Iran’s economy. German companies doing business in Iran should wind down operations immediately.” The reaction in Germany was swift and harsh, as people across the political spectrum observed that America’s new ambassador in Berlin clearly viewed himself more as a colonial governor than a partner. Friends don’t publicly order friends what to do.

The politest smackdown came from Wolfgang Ischinger, who served as Gemany’s ambassador in Washington for half of a decade, who tweeted: “Ric: my advice, after a long ambassadorial career: explain your own country’s policies, and lobby the host country – but never tell the host country what to do, if you want to stay out of trouble. Germans are eager to listen, but they will resent instructions.” Grenell lamely retorted that he was only stating what the White House told him to—which, given German views on the “I was only following orders” excuse, failed to repair the damage.

On his very first day, Ric Grenell destroyed his relationship with Germany by acting like the blowhard Trumpist flack that his detractors said he was. It now makes sense why the Republican-controlled Senate took so long to confirm his appointment. Any normal White House would now call Ambassador Grenell back to Washington “for consultations” and make sure he never returns to Berlin. However, any normal White House would never have appointed someone so cluelessly defective as Grenell to any important diplomatic post in the first place.

The problem with Ric Grenell is greater than his lack of manners or understanding of how diplomacy is conducted. His bread and butter for years has been serving as a political consultant and advisor. He founded Capital Media Partners in 2009, which has offices in Los Angeles, San Francisco, New York, and Washington, D.C, to assist clients with “international strategic communications.” Grenell boasts of having “clients based in the U.S. as well as Iran, Kazakhstan, the Democratic Republic of the Congo, Somalia, China, Australia, Timor-Leste, and throughout Europe.” These days, when close associates of Trump such as Paul Manafort and Mike Flynn have gotten into legal trouble by failing to file with the Department of Justice under the Foreign Agents Registration Act, known as FARA, it’s valid to ask whether Grenell complied with the law here.

Moreover, what does “throughout Europe” mean? Here we need to discuss Moldova, a benighted little country that few Americans ever think about, yet which became a subject of brief, intense interest to Grenell shortly before our 2016 election. The poorest corner of Europe, where the average salary is not much more than $200 monthly, Moldova barely has any legitimate economy, and the former Soviet republic is a watchword for hopelessness. The country is known for its out-of-control corruption and crime, particularly its lurid role in the illegal trade of sex slaves. Moldova’s main industry is the selling of its young women, often children, to human traffickers, who dispatch them around the globe to be exploited.

Grenell, who does not seem to have shown any interest in that troubled country before or since, oddly published four American op-eds between mid-August and mid-October 2016, extolling Moldova’s virtues. According to Grenell, brave little Moldova was standing up to illegal Russian influence—a strange take, given the author’s general tendency to rudely blow off accusations of Kremlin malfeasance when they involve President Trump. To anyone versed in Moldova’s nasty and obscure politics—not a large group in America—Grenell was going to bat for Vladimir Plahotniuc, the most powerful political player in Moldova, not to mention the country’s wealthiest oligarch.

In the summer of 2016, Plahotniuc’s charmed life as his country’s “most feared tycoon” (in the words of the New York Times, which termed him “Moldova’s most-feared figure, a nominally pro-Western tycoon with a reputation so toxic that even his political friends usually try to keep their distance in public”) hit a rough patch when Mihail Gofman, the country’s anti-corruption czar, went public. Seeking safety in America, Gofman explained to the FBI how Plahotniuc oversaw the theft of $1 billion from Moldova’s state treasury—one-eighth of the country’s annual GDP—then laundered it with Kremlin help. Gofman’s fears for his future were well founded. When Moldova’s former Prime Minister Vlad Filat, a sincere Kremlin opponent, denounced Plahotniuc for his role in the billion-dollar-theft, he was arrested and sentenced to nine years in prison, reputedly on Plahotniuc’s orders.

Gofman’s account, which confirmed what many Western intelligence agencies suspected, exploded Plahotniuc’s carefully crafted myth of being “pro-Western” as head of the Democratic Party of Moldova, which manages to control the country’s politics, despite never getting even one-fifth of the votes in any election. In fact, Plahotniuc—termed “Moldova’s Donald Trump”—is deeply in bed with Russian organized crime, specifically the notorious Solntsevo Brotherhood led by Semyon Mogilevich, according to INTERPOL.

Nevertheless, in his 2016 op-eds, Grenell insisted that Gofman was wrong, and Plahotniuc was really a pro-Western figure under Kremlin attack. Grenell, who falsely claimed that Gofman was under Russian influence (“a former Moldovan official with ties to Russia and disguised as a whistleblower,” as he put it), even attacked a U.S. Congressman, Randy Weber, a Texas Republican, who tried to assist Gofman in exposing Moldovan crime and corruption, tarring Rep. Weber as pro-Kremlin. Grenell stated in an interview just two weeks before our 2016 election that Rep. Weber “does not know what he is doing,” lambasting the congressman’s resolution on Moldova, which was critical of Plahotniuc, as “Clearly written by somebody who is pro-Russian. He’s trying to attack the only pro-European group in Moldova.”

It’s worth asking why Grenell developed a sudden and passionate need to defend Vlad Plahotniuc. Presumably this wasn’t an act of charity, but Grenell has failed to disclose what motivated his spirited public defense of Moldova’s top oligarch-cum-crime boss. His financial disclosure forms submitted for his appointment as ambassador to Berlin reveal that over the past year Grenell made $688,362 from Capitol Media Partners, i.e. for political consulting. For whom, however, is unclear.

Yet there is a clue lurking in the list of entities which Grenell made more than $5,000 from, namely Arthur J. Finkelstein & Associates. A legendary Republican political operative, Art Finkelstein played a role in Ronald Reagan’s rise to the White House, and subsequently plied his trade around the world. Famously, Finkelstein turned around the political career of Bibi Netanyahu, transforming Israeli politics in the 1990s. Finkelstein and Grenell were close, with the former serving as a mentor to the latter. Finkelstein’s firm also did work in Moldova as recently as 2014, and is known by Western intelligence to possess links to Plahotniuc. However, Art Finkelstein died last summer and isn’t available to explain what Ric Grenell did for him to receive payment in excess of $5,000.

This is an important matter since Plahotniuc isn’t just a corrupt oligarch who stands plausibly accused of robbing his impoverished country blind. He’s also a human trafficker, in fact the leading one in Moldova. INTERPOL admitted his role in human trafficking in 2012, based on an Italian request. Although Plahotniuc has never been charged with this crime, this isn’t surprising given the influence he possesses over Moldova’s highly corrupt judiciary. Sergiu Mocanu, one of the few Moldovan politicians brave enough to speak out, stated, “Plahotniuc was involved in human trafficking, he was a pimp, he received money from this business.”

What Plahotniuc really is represents one of the worst-kept secrets in Eastern Europe. His criminal enterprises are well known to Western intelligence and police agencies. If Ambassador Grenell went to bat for Plahotniuc for money, the American public deserves to know how much and from whom. This should have been unmasked during Grenell’s Senate confirmation process. Why it was not should be asked as well. 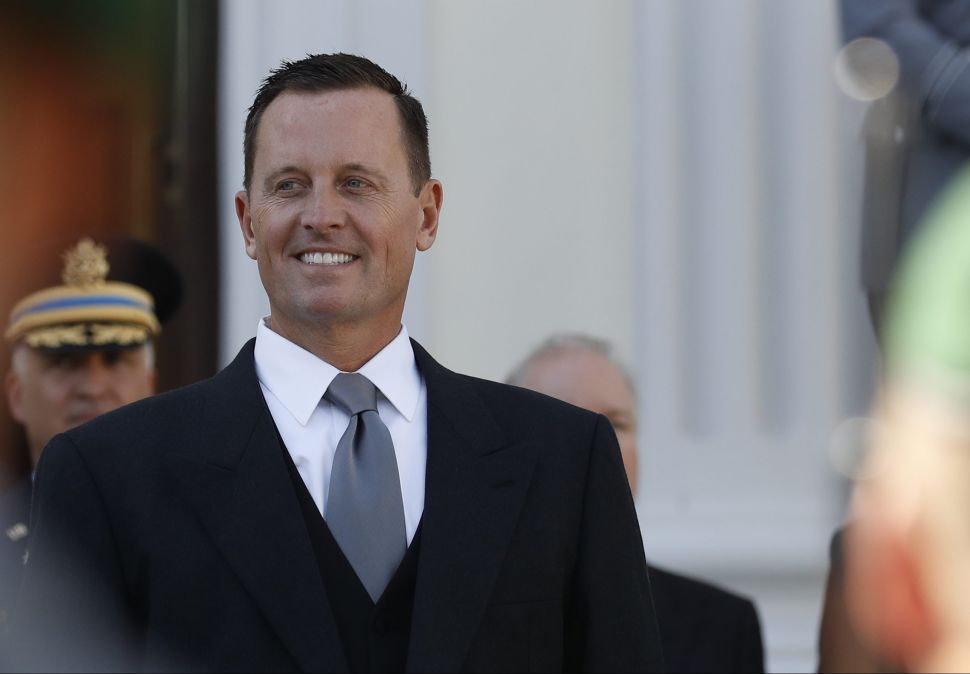