Meteorologists talking about the weather can feel like whacking a wasp’s nest these days, and it’s all thanks to conspiracy theories. Simple pictures of clouds or warnings about thunderstorms can elicit reactions nastier than the latest political throw down.

Meteorologists and weather reporters frequently deal with readers who insist that the weather is being controlled by an outside force, though they provide dubious evidence. They insist anyone who debunks their weather modification claims or refuses to agree with them is willfully ignorant or malicious shills raking in gobs of money to cover for whatever power is in control. The anger ranges from simple venting of outrage to outright death threats for allegedly covering up the truth.

The Theories They Believe in Are Wild

The most popular weather control conspiracy theory has to do with the long, thin condensation trails, or contrails, left behind by high-flying airplanes. The right combination of cold and humidity in the upper-levels of the atmosphere allows hot jet exhaust to condense into cirrus clouds. These clouds can dissipate immediately or linger for hours depending on weather conditions. Conspiracy theorists argue that these “chemtrails” are really clouds of hazardous chemicals being sprayed into the atmosphere by thousands of airplanes to manipulate our minds, make us sick, and/or control the weather.

The same goes for a research project in Alaska. Scientists set up a field of high-powered antennas in the Alaskan wilderness to study how radio waves propagate through the Earth’s ionosphere. This project is called the High Frequency Active Auroral Research Program (HAARP) and is a frequent target for commenters and YouTubers who say that shady government forces use concentrated energy beams sent out by these antennas to control natural disasters and direct calamity to specific parts of the globe. The HAARP conspiracy theory is essentially a real-life version of an episode of Pinky and the Brain.

Even every day weather radar isn’t immune from outlandish claims. Doppler weather radar in the United States works by sending out two pulses of energy to reflect off objects in the atmosphere. The energy that’s reflected back to the dish tells meteorologists the location, intensity, movement, size, and shape of whatever the radar detects.

This technology has glitches and flaws. Migrating birds and swarming bugs show up as a nebulous, vibrating balls of activity. Wind turbines show up as giant, stationary thunderstorms. The angle of the sunrise and sunset on certain days of the year can cause a spike of false returns. These glitches and false returns are sometimes used as proof that the government is using weather radar to control the precise location and intensity of thunderstorms.

So Why Do People Believe Them?

Money. It’s the single strongest factor behind the spread of conspiracy theories. If you search “chemtrails” or “HAARP” and look into the people and organizations pushing these conspiracy theories, the common factor is that they’re profiting from doing so. Not only do they reap ad revenue, but they often ask for donations or try to sell their readers products. There’s a clear financial incentive to convince people to believe their claims.

People don’t want to believe that disasters are random. It’s terrifying to think that a tornado could sweep away your home with only a moment’s notice and that earthquakes can trigger tsunami waves that kill hundreds of thousands of people. The indifference of disasters is an unsettling thought that’s hard for humans to grasp. It’s oddly more comforting to believe that a group of evil people sitting around a table created a superstorm than it is to believe that bad things just happen.

Believing in an alternative truth makes people feel smarter. It makes them feel superior when they think they know something no one else knows. And when someone tells them they’re wrong, a conspiracy theorist argues their opponent is not enlightened or involved in the cover up. Feeling smart and being “in the know” is an important part of the appeal of conspiracy theories.

Many people who believe in weather control conspiracy theories already have a negative opinion of the government. This partially explains why they attribute natural disasters to those supposedly evil jerks in Washington or at the U.N. in New York. After all, they figure, when they’ve already done things beyond the pale, what’s to stop them from triggering natural disasters?

Conspiracies theories are often interwoven. If someone thinks they know the truth about one thing, they tend to think they know the truth about everything. The people who believe there’s an omnipotent world government are often the same people who believe the weather is made by computers. If you believe that there are secret military operations happening, it’s not that much of a stretch to believe that the 9:30 into Dulles is spraying us with noxious chemicals. Many conspiracy theories are gateways to each other, and once the gate is open, it’s hard to put the sheep back in the field. 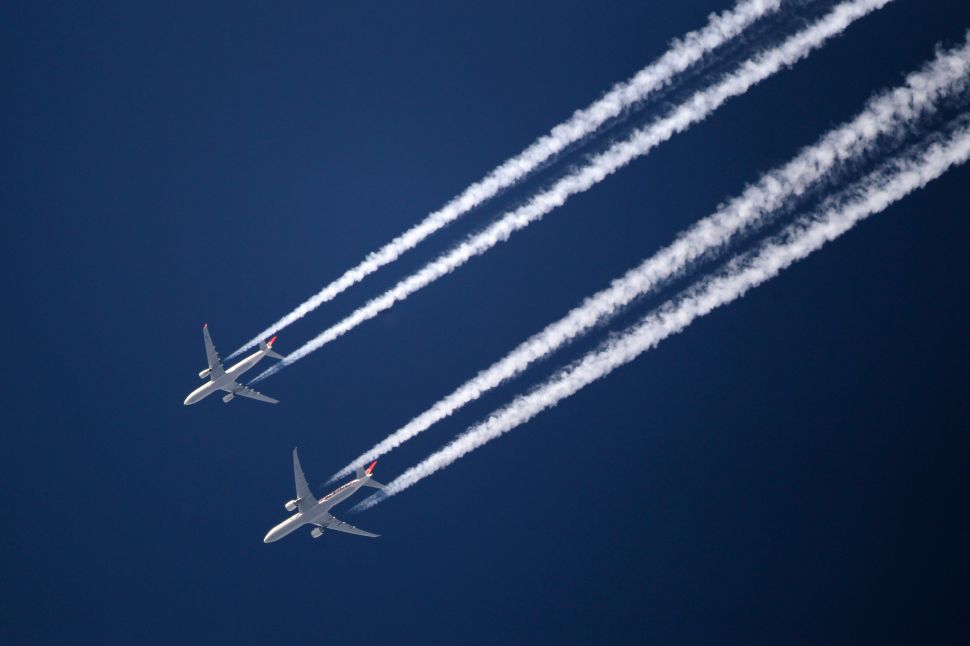