The ERA, which would guarantee that constitutional rights apply equally to all individuals regardless of gender, was passed by both houses of Congress in 1972 but was ratified by only 35 of the 38 states needed to amend the Constitution.

The only right guaranteed to women in the Constitution is the right to vote. The ERA would give the federal government the authority to pass laws prohibiting sex discrimination in hiring, firing, promotions and benefits.

Maloney has reintroduced the ERA 11 times. On Wednesday, she is hosting a hearing on the need for the ERA in Washington, D.C. Among the witnesses at the hearing will be Milano and Carol Robles-Román, co-president of the ERA Coalition.

“I am here today basically because women are not guaranteed equal justice under the law of our Constitution,” Milano said by the Fearless Girl Statue in the Financial District of Manhattan on Monday morning. “Really think about that. In 1923, the Equal Rights Amendment was first proposed by the national women’s political party, and it stated that the amendment was to provide for the legal equality of the sexes and prohibit discrimination on the basis of sex. Now it is almost 100 years later, and we are still fighting the same fight of this belief that equal means equal.”

She noted lack of recognition of women’s equality perpetuates the belief that women are “less than,” which she said results in unequal treatment, abuses of power, sexual harassment, misconduct and assault. And she argued that passage of the ERA is also an economic issue, noting that when women earn more money, the economy thrives, leading to equal pay for women.

In 2017, Nevada ratified the ERA and just last week, Illinois became the 37th state to ratify the amendment.

Milano, who has encouraged people to participate in the #MeToo movement founded by activist Tarana Burke in 2006, added that the ERA would serve as legal protection against efforts to roll back advances in women’s rights since the mid-20th century, noting that there are currently discriminatory laws being enacted throughout the country.

“The ERA would put women on equal footing, particularly in the areas where women have historically been treated as second-class citizens, including in cases of public education, divorce, child custody, domestic violence and sexual harassment in the workplace and assault,” Milano continued. “And the ERA will also eliminate sexual discrimination in the armed services and ensure that government programs do not have a negative impact on women.”

In 1923, suffragist Alice Paul introduced the ERA following passage of the 19th Amendment in 1920, which granted women the right to vote.

The late Rep. Shirley Chisholm (D-N.Y.)—the first African-American woman elected to Congress, the first black candidate for a major party nomination and the first woman to seek the Democratic presidential nomination—supported the ERA. In 1969, she gave an address to the U.S. House of Representatives in which she backed the amendment.

Maloney said she is ushering in a “new era” for the ERA.” In May 2017, she vowed to renew her efforts to get it passed, contending that the election of President Donald Trump—who was heard describing sexually assaulting women on tape—was even more reason to get the amendment passed.

In April, she sent a letter to House Judiciary Committee Chairman Bob Goodlatte requesting a hearing on the ERA, but she said she has not received a response. She also noted that there has not been a congressional hearing on the ERA since 1984.

“We are here today because a whopping 94 percent of the American people support the Equal Rights Amendment in the Constitution of the United States, and it is an amendment that is long overdue,” she said. “It’s been 242 years after the founders declared in our Constitution that men were equal in our constitution.”

And she blasted congressional leaders for not taking action to ratify the ERA.

“The current crop of congressional leaders have not only refused to do anything about it, they’ve refused to even talk about it,” Maloney continued. “Think about it: women are half the population of the great United States of America. The only guarantee that we have in the constitution is the right to vote.”

Robles-Román said the coalition has “an equality roadshow that’s nonstop,” referring to the group’s organizing and marches to promote the ERA. She urged all individuals to support the amendment.

“Everybody should be involved in the movement for women’s rights, for women’s equality, for putting women in the United States Constitution now,” Robles-Román said. “Not tomorrow, not next week. We know that this is something that is not intuitive, so we are gonna make it intuitive.” 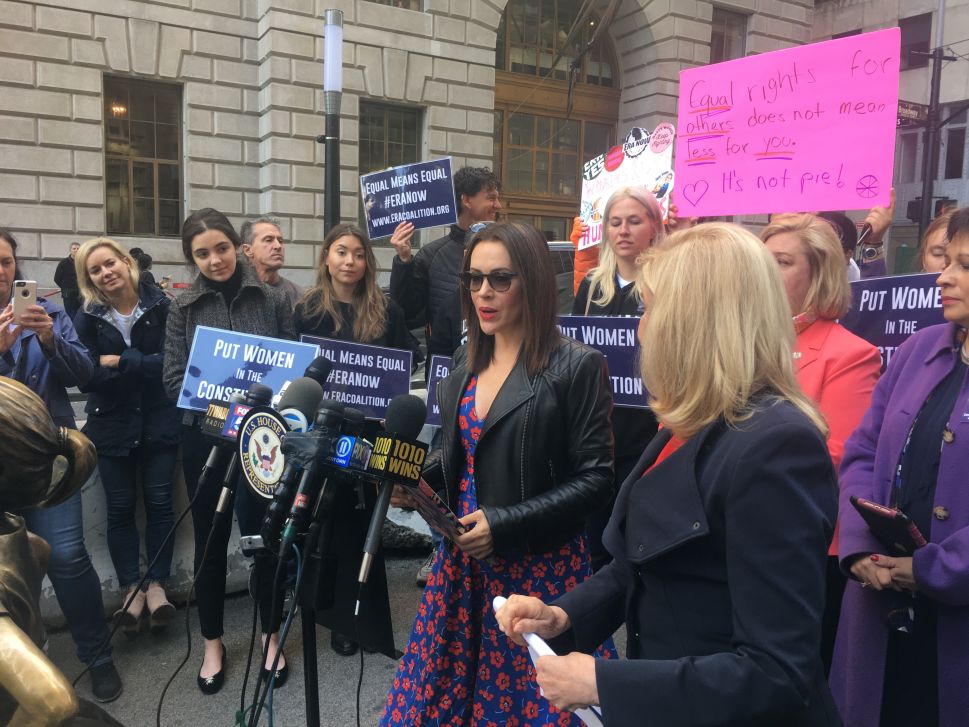