He was a titan, a poet and a potty mouth. He had the acerbic wit of an Oscar Wilde protagonist and the bacchanalian instincts of a death metal roadie. He was well-read. He had a handshake that could waffle from limp to stern depending on his energy level. He made you feel included in whatever conversation was going on. He was exactly how you would imagine him in person. He facilitated conversation better than anyone on the planet, whether there were cameras running or not. He was so good with words it inspired jealousy and yet so dedicated to his work it inspired the same effort. He worked tirelessly to let his devotion and respect for his subjects shine through. He was an eternal student, hungry to absorb the essence of that which was placed before him, not so that he may simply consume it, but so that he could translate its essence back unto us. He was as at home in a palace as he was in a cabin or a tiny third world village. He loved the world just as much as he loved America. Yet he always expected better of America, and argued passionately for it to be so, which only helped forge him as an icon of Americana itself.

He was a pretty good chef, too.

For decades Anthony Bourdain graced our pages and television sets as a “host,”—a perfectly inadequate word to describe what he somehow managed to accomplish with the programs of No Reservations and Parts Unknown. Shows which could naively be reduced to being about food or travel, yet were really just brilliant meditations on culture, boundaries, sociology and the human condition. When you look upon his twitter bio, it simply reads “enthusiast,” and there could be no better description. He was an enthusiast for the world itself. And like all great enthusiasts, his input did not come from some idealistic, saccharine instinct to please, but from pain itself.

While many read Kitchen Confidential for its exposure of the salacious underbelly of fine dining restaurants, they might have ignored the real story of a man who battled heroin addiction and graciously came out the other side. Bourdain’s past, his trouble, his anger, all bubbled out in stark honesty, which in turn gave him compassion for the root pain behind it. It’s exactly what made him an empath to the world. And perhaps the one figure of both media and food (my two favorite worlds) that I loved beyond comprehension.

This morning I found out he committed suicide.

I had already been up all night, part of the sad effect of endless deadlines and no human schedule to adhere them to. And right as the morning light seeped through my window and I was finally dozing off to sleep, I saw the news…I screamed. I threw the fan by my bed against the wall. I cried. I went catatonic. I knew him, Horatio. People literally started reaching out to me when they heard the news, because, well, they knew they should. And then, as I saw the same familiar beats and talking points play out online when it comes to “the issue,” behind his death, I realized I finally had to say something personal in unblinking, certain terms.

Because I have dealt with “the issue” extensively.

Suicide, or that which wishes not to be named, is a beast beyond most people’s comprehension. They see it as an abstract, something that naturally runs contrary to the instincts of survival. But it’s actually like a sleeper agent, placed in your brain long ago by things beyond your control. And after years of confidence and not being able to connect to it at all it can suddenly come online. It’s not just the usual triggers that do so—depression, anxiety, fear, addiction, inescapable guilt—it can be the strangest and oddest things, too, which can just put you off-kilter when it rears its ugly head. But the most terrifying part of suicide is how it suddenly goes from being something unthinkable to the easiest thing in the world. For it is the simplest, most elegant solution to a problem that is beyond solving any other way. It feels downright obvious.

And so, your life suddenly becomes about managing this constant, evergreen impulse. I cannot explain what it means to go through 60 percent of a given day fighting the very thought, but it is one of the most tiring, all-consuming things a human being can do. And please know, it does not matter what success, what joy, and what beauty you can leave behind when you take your own life. For I have, by all accounts, “made it,” in the way that many dream of and also imagine will solve their problems. But the cruel irony is that in truly grasping hold of all those lovely things, they will only serve to show you that the suicidal and depressive impulses are still there.

And they will always be there. That is, until you can somehow, someway, beat back the tides of original programming that go so far back that you do not genuinely know a life outside of them. You only know that you’ve been constantly running from them, and in denial about that fact.

But what could create such a powerful thing?

Well, we call it trauma, but it is so much more than that term can allow, because it is so often laced into the daily traumas that informed our everyday sense of the world. It forms into a brain full of imperfect coping mechanisms, things we think will give us the answers to life’s problems, but ultimately won’t. And when they finally crash and burn, we start burning in a way we never thought was possible. So what we then realize is those coping mechanisms inadvertently created the suicidal instinct as well, which is only the most perfect and silencing coping mechanism of all.

And there it is: the grand reveal that the biggest problem with suicide is that it is genuinely a good solution. And to get outside of it, to live with it, and to effectively take all that pain and find a way to give back and help the world is something most could never imagine. In that sense, what Anthony Bourdain did was Herculean. It is the act of grace itself. He gave a gift to us and you truly do not realize the strength it took for him to give it. So while I beat my chest and shout to the fucking rooftops about how this horrible thing has happened, there is the part of me that…simply knows what he was facing.

And I’m so proud of him for making it this long.

While it might seem prudent to end on that note, the measures of practicality that come along with this conversation are just too important to be ignored. So here’s some advice:

1. When things like this happen, linking to Suicide Prevention Hotlines is all well and good, but (and I can only speak from my own experience) it’s like bringing a BB gun to a nuclear war. Hotlines can be good in that they get you talking for a few minutes, but most people don’t come back to them after the initial calls. Which means that somehow, someway, getting someone into long term therapy (which is costly) is the most hopeful solution for getting to the source of a deep-seated problem, which tends to be the root cause of suicidal distress.

2. Don’t get freaked out by talk of suicide. I know it’s scary when people bring it up, but what happens will have nothing to do with what you do or don’t do, and instead are utterly dependent on the internal battles the someone is dealing with. Because so often, the biggest thing someone needs to do is express the feeling of suicidal thoughts without feeling like a goddamn alien for doing so. For instance, I finally expressed thoughts of suicide to a good friend one night over drinks and he looked me dead in the eye and said “Well…if you do, can I have your TV?” and it was a joke I needed to hear so badly, and I will be forever thankful @JimJarmuschHair.

3. If you do want to help out with someone who you know is struggling, or you suspect is struggling, you don’t need to do anything special. Just reach out in the most casual and normal of ways. Say you should get lunch, or invite them along to something. Get them to put something on the calendar. Just fill them with normalcy and give them the space to talk if they want to. You don’t need to be a superhero, or a therapist or even a BFF, just be yourself, and remind them of the world you share.

It’s not only all you can do, it’s more than you can imagine.

What’s funny about writing all this is that I’m suddenly realizing the last gift that Anthony Bourdain has given me: I finally have the courage to talk about this dire subject so nakedly, honestly and purposefully…just as he did 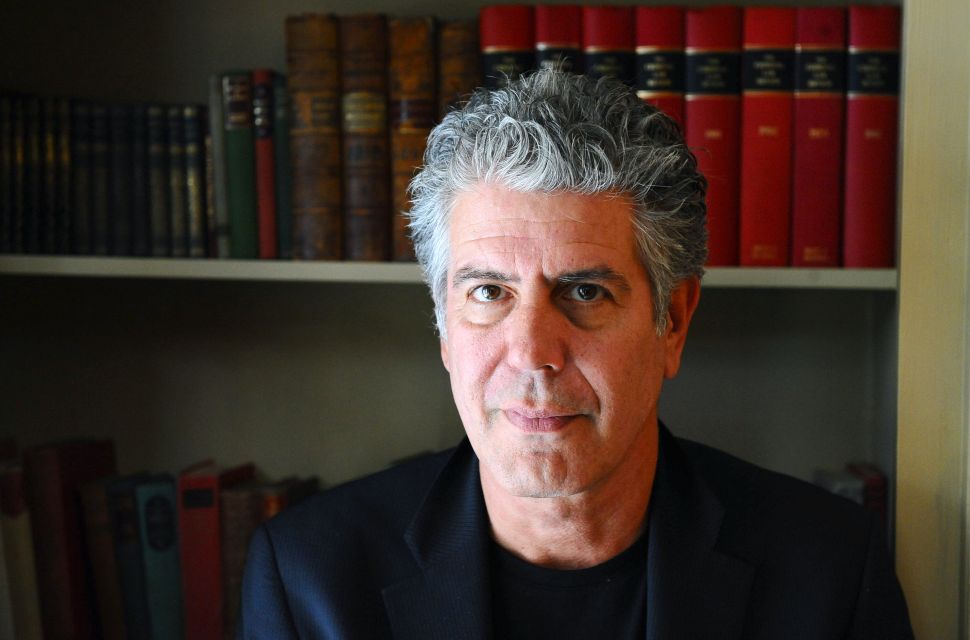