In 1957, the Soviet Union launched Sputnik 1, and the U.S. government freaked out. The Sputnik crisis, as it was called, launched the international space race, and the U.S. threw billions of government dollars into aerospace and military projects to keep up with the Soviet Union. A new report by the Atlantic Council claims that now, in 2018, we should be in the middle of another Sputnik crisis, but this time over the possibility that Chinese companies might soon out-tech Silicon Valley and the entire U.S. technology sector.

The report, titled “The Global Innovation Sweepstakes,” is an expansive 108-page project by the Atlantic Council. The group, a think tank founded in the Cold War era that generally advocates for cooperation between Western powers, sent researchers to technology hubs around the world to assess the relative level of development. Robert Manning, the report’s lead author, told Observer that while the U.S. still sits atop the tech world, our chaotic politics, failing social safety net, and woefully underutilized work force could mean that China develops the technology of the future—namely A.I., big data, robotics, and communications tech—faster than we do.

“The first step is to understand that we should be having a Sputnik moment,” Manning told Observer, saying that our government should respond the same way the Eisenhower administration did to Sputnik’s launch by reorganizing the government, funneling government spending toward research and development, and promoting science, technology, engineering, and math education in schools. “We need to see what’s going on as kind of a shock to the system.”

What’s going on, the report says, is that China has quietly turned itself into a powerhouse of technology and innovation. Silicon Valley is still the home of Google, Apple, Facebook, and most of the technology barons that demand our fealty and data in one way or another. However, China now boasts 42 percent of e-commerce retail transaction value around the globe, one-third of the world’s startups valued at $1 billion or more (known as “unicorns”), and as many as 1,000 venture capital firms worth more than $100 million. The country has been blending government funding with VC dollars and contributions from state-run banks, and has thrown resources into creating a mobile-payment system that could eliminate physical cash from its society altogether.

This isn’t to say that China is a flourishing technological powerhouse about to take over the world. It has to grapple with an aging population and its workforce is ill-prepared for a digital- and technological- centered economy. “They’re going to be one of the first countries that’s gotten old before they got rich,” Manning said, “Which means a shortage of skilled people.”

The problem is, according to the report, the U.S. isn’t in great shape either—and pretty much every direction U.S. society is going is setting us further behind.

“What we’re seeing in our political system is a kind of fear of the future, rather than ‘how do we prepare for the future,’” Manning said. “Because it’s coming whether we like it or not.”

The core of the race to our technological future, Manning says, is going to be in three things that all blend into each other. A.I., big data, and automation will all have a massive effect on our daily lives, and how countries adapt to them will set nations apart in the rapidly-changing new world order.

China is advantaged by its autocratic, heavily centralized government, which can dictate policy for the country’s 1.5 billion people pretty much at will (autocracy isn’t an advantage for, say, the average Chinese worker or citizen, of course). China is also pushing the envelope on controversial science like genetic editing (like these CRISPR-modified super-muscular beagles), and has thrown resources into the Made in China 2025 program, which aims to modernize the country’s manufacturing infrastructure.

Made in China 2025 particularly freaks out the West, because the U.S. isn’t ready for the future of manufacturing either. Manning explained that as A.I. and automation change the nature of work, the American workforce will have to adapt to new demands, and we’re already behind.

“There’s tens of thousands of jobs that companies can’t fill because the skill-sets aren’t there,” Manning said, referring to high-tech jobs like robotics workers and engineers. The solution, he says, is a renewed federal and state investment in job retraining programs. The classic example, of course, is a program that teaches a factory worker how to operate and service the robot that will eventually take his or her job. At higher levels, Manning said, the U.S. also needs a federal push to get more Americans into STEM fields—particularly women and people of color.

That’s because Manning said the U.S.’ greatest strength in global technological battles has always been diversity.

“In nearly every leading case examined in these pages, immigration has been a major factor accounting for their success,” the report reads. “Immigrants need to feel welcomed if they are to stay and invest in their talents over the long run.”

In the 1940s, 1950s and 1960s, the U.S. and Russia squared off in the nerdiest possible version of NFL draft night, competing to attract top scientific minds to fledgling aerospace and nuclear programs (sometimes even bringing over former Nazi researchers). Today, President Donald Trump’s arbitrary travel ban for many Muslim-majority countries has left numerous academics and scientists stranded in their country of origin—which probably isn’t the best recruitment practice.

The report delves even further into the colossal number of ways the U.S. is essentially shooting itself in the foot. Manning mentioned that health care, a subject many other social democracies have essentially figured out should be a given for all their citizens, is still in a chaotic capitalist limbo in the states. He said the government must play a larger role in funding basic research and development, so that experimentation can flourish outside of the market pressures that force many private companies to focus on how to sell new innovations, rather than creating them from scratch. The report’s subject, for the most part, is on the advancements made by other countries competing to become global technology’s new capital. But it’s really about the U.S.—competition can exist, but it’s not insurmountable.

“To retain its prominence, the U.S. needs to take a good, hard look at itself,” Mathew J. Burrows, the director of the Atlantic Council’s Foresight, Strategy and Risks Initiative, wrote in the study. “The question is whether it is capable of doing so.” 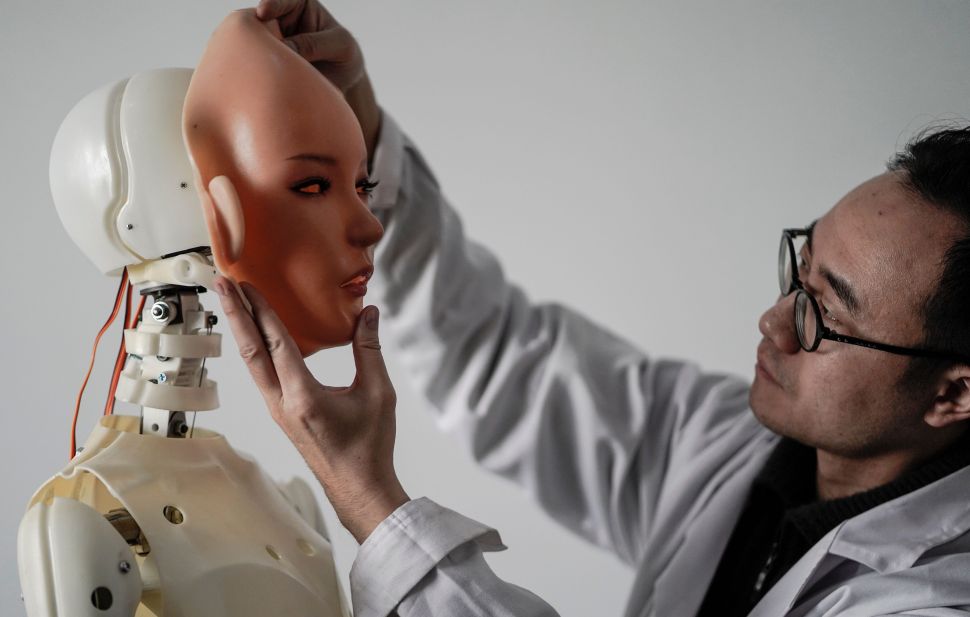