President Donald Trump’s much ballyhooed Singapore pseudo-summit this week with Kim Jong-un, North Korea’s hereditary strongman, was a bizarre event by any standards, even Trump’s high ones for strangeness and norm-breaking. The mere fact that North Korea, the world’s nastiest dictatorship, was invited to meet with the American president as a peer, on equal standing, was a huge diplomatic victory for Pyongyang. Just by showing up, Trump gave that ugly regime the official imprimatur it has craved, and never gotten, ever since Joseph Stalin placed Kim Il-sung, the current leader’s grandfather, on the communist throne in 1948.

As for actual diplomacy, there wasn’t much on display in Singapore. This was a glorified photo op, hardly a bona fide summit, much less a significant diplomatic happening—except for the fact that it happened at all. Pyongyang received the famous Trumpian thumbs-up before the cameras, for the world to see. In return, North Korea gave, well, nothing, really. There are vague assurances in the joint declaration signed by Trump and Kim in Singapore about “complete denuclearization of the Korean peninsula,” notwithstanding that Pyongyang has demanded that for decades, by which they mean getting American nuclear weapons out of South Korea. Although the administration is promising “major disarmament” by Pyongyang imminently, no seasoned Korea-watchers consider that likely.

True to form, this week Trump has tweeted boastfully about his Singapore romp with the strangely coiffed fellow he so recently was dismissing as “Little Rocket Man.” As he stated plainly, complete with his customary weird capitalizations, “There is no longer a Nuclear Threat from North Korea.” This would be news to Pyongyang—and the U.S. military. Adding insult to injury, Trump promised his new friend that he would cease longstanding joint military exercises with American forces and South Korea’s, which is a serious blow to our military readiness and ability to deter North Korean aggression, not to mention a big win for Pyongyang—and their benefactors in Beijing. Tellingly, Trump has repeatedly called these exercises “war games,” a pejorative and propagandistic term used by the Kremlin and others who portray America as a global aggressor.

We maintain a significant military presence in South Korea, dating to the Korean War of 1950 to 1953, which began with a North Korean invasion of its southern neighbor, on Stalin’s orders. Some 40,000 Americans died in that war, and U.S. Forces Korea includes more than 23,000 American military personnel today, since the war that was halted 65 years ago next month never officially ended. The Demilitarized Zone, the infamous DMZ that separates the Koreas, is one of the world’s hottest hotspots, and USFK’s motto of “Be Ready to Fight Tonight” is no laughing matter for our troops in South Korea.

Nevertheless, Trump’s promise to Pyongyang to cease our “war games” seems not to have been coordinated with any of the key stakeholders here—not the Pentagon, not the Joint Chiefs of Staff, not U.S. Pacific Command, not USFK, and, crucially, not with South Korea either. Which it itself shocking, but that’s nothing compared to what else our president did in Singapore. In a remarkable piece of footage released by North Korean state TV this week, our commander-in-chief is shown to salute a uniformed North Korean general. As captured on film, General No Kwang-chol, who is Pyongyang’s defense minister, stood before Trump, who offered his hand to shake. The general saluted Trump, who awkwardly saluted him back, then the two shook hands. This was a bizarre spectacle by any standards. While mutual salutes are the norm among uniformed military personnel pretty much everywhere on earth, civilians don’t abide by those rules.

While it’s de rigueur for the American president to salute back when his White House military guards, usually Marines, salute him first, this isn’t required—and our president isn’t supposed to salute foreign military officials. When asked about this yesterday, Sarah Huckabee Sanders, the White House press secretary, stated, “It’s a common courtesy when a military official from another government salutes, that you return that,” which is simply a lie. Not to mention that this is North Korea we’re talking about. Salutes are an important form of military courtesy; they send a genuine message for all to see. And here President Trump sent an indelible one.

Pyongyang isn’t just a hideous regime, a vast human rights abuse machine. It’s a Stalinist hellhole holdover that starves its own citizens and still runs concentration camps where some 200,000 North Koreans are imprisoned. Kim, praised as a “tough guy” by Trump, is reported to have employed novel methods such as using packs of hungry dogs or a battery of anti-aircraft cannons to murder his opponents into oblivion.

Then there’s the fact that our president saluted one of the top generals of an army and a state whom we officially remain at war with. While the guns fell silent on the DMZ at the end of July 1953, Pyongyang has lashed out many times since, simply because it can, killing 34 Americans in the process. Let’s revisit their deaths, since nobody in the White House seems to have remembered these American military personnel who were murdered by the military that Trump just saluted.

On January 23, 1968, North Korean torpedo boats attacked and seized the U.S.S. Pueblo, a U.S. Navy spy ship, in international waters. The nearly unarmed Pueblo was raked with cannon fire, killing one of her crew, while the surviving 82 sailors were taken captive. Humiliatingly, they were kept as prisoners for almost a year, enduring unpleasant conditions, before Washington, D.C. secured their release, and the Pueblo’s loss constituted a major blow to U.S. intelligence. To keep their piratical humiliation of our military fresh, Pyongyang held on to the spy ship, and a half-century after its capture, it’s on public display at the Victorious War Museum in North Korea’s capital.

The sailor who died when the North Koreans stole this ship was Fireman Duane Hodges, who was killed while trying to destroy top-secret documents before they fell into enemy hands, for which he was posthumously awarded the Silver Star. Hodges was just 21 years old when he died, and he was almost the exact same age as Donald Trump was at the time, being born less than two months after our 45th president. Hodges did not miraculously discover he had bone spurs, however, and died a hero.

A little over a year after the North Koreans murdered Duane Hodges, Pyongyang did something even more outrageous against our navy. In an incident that has never been fully explained, on April 15, 1969, MiG-21 fighter jets of the North Korean air force jumped and shot down an EC-121, a lumbering, unarmed propeller-driven spy plane, in international airspace almost a hundred miles off the North Korean coast. All 31 Americans on the doomed EC-121 lost their lives in this unprovoked attack, the worst of its kind. During the Cold War, 90 U.S. spy-sailors were killed by communist attacks on their spy planes, but the North Korean EC-121 shootdown was the bloodiest incident of them all.

Then, on August 18, 1976, two unarmed U.S. Army soldiers, Captain Arthur Bonifas and First Lieutenant Mark Barrett, were brutally murdered in the DMZ by North Korean soldiers armed with axes. Both sides were bizarrely in dispute over a tree growing in no-mans-land, one that Pyongyang resolved by killing the Americans. Hacked to death in this premeditated attack, Bonifas was near the end of his tour in Korea, preparing to return to his wife and children, while Barrett had only recently arrived in the country.

There is no record of Trump bringing up any of these 34 dead Americans, or the return of the U.S.S. Pueblo—which remains the property of the U.S. Navy—in his smile-filled discussions with Kim Jong-un this week.

It would be a fine idea to reduce tensions on the Korean peninsula, which have been high for the last seven decades, sometimes dangerously so, thanks to Pyongyang’s belligerence and aggressive antics. Even better would be an end to North Korea’s nuclear weapons program before it includes intercontinental ballistic missiles capable of striking all the United States. However, Trump’s Singapore photo op does little if anything to achieve those goals, while honoring the awful Kim dynasty and dishonoring our dead heroes. By saluting the enemy, our president shows whom he respects—and whom he doesn’t. 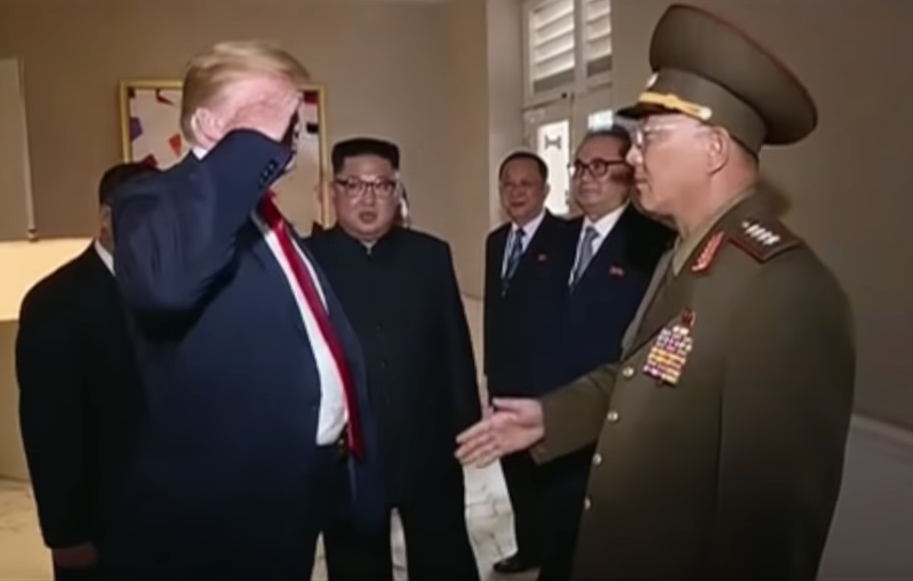