During his fire-breathing rant on Hannity Monday night, the reactionary gasbag Mark Levin belched that he was speaking slowly so “even Chris Cuomo can comprehend me.”

This was the Fox News Channel’s cheap shot way of welcoming a new competitor in the same time slot. While Levin and President Donald Trump’s chief fluffer Sean Hannity recited the usual talking points and avoided true news in the 9 p.m. hour, Cuomo hosted the official debut of Cuomo Prime Time on CNN.

“Whatta’ya say, friends?” Cuomo told his audience. “Let’s get at it!”

As the son of a former New York governor and the brother of another who is current, Cuomo is well connected politically. But what if he ever has to cover a story about his brother, Andrew?

And we know Cuomo is a veteran of TV’s big leagues. But can he compete successfully against the right-wing Hannity on Fox, whose lowbrow show usually wins the hour in the ratings, and the progressive The Rachel Maddow Show on MSNBC, whose highbrow approach usually finishes a close second?

Like a third-party candidate in a presidential election, Cuomo may be the spoiler who takes away support from one side. In that Fox and Hannity command the closed-minded Trumpist audience, there is a chance that any gain for CNN in the time slot will reduce Maddow’s more liberal, more open-minded and truth-seeking following on MSNBC.

What’s left for Cuomo? At times on Monday, it sounded like a love-in.

“Now, we’re in sync, my brother,” Cuomo said to anchor Don Lemon as he prepared to pass the mic baton to him near 10 p.m. “Take it from here, my handsome friend.”

Also rather chummy was Cuomo’s major interview with former New York Mayor Rudy Giuliani, one of Trump’s legal mouthpieces, on remote from Jerusalem.

Speaking from both sides of his mouth from the other side of the world, Giuliani repeated recent excuses for the Trump administration’s lies about the cover-up of the Trump Tower meeting in 2016 between Trump campaign officials and Russian agents promising dirt on Hillary Clinton.

“Somebody’s lying, Rudy,” Cuomo said. When Giuliani told Cuomo he would “take a lie detector test” and “swear to God,” Cuomo joshed, “Be careful about swearing to God in Jerusalem.”

Giuliani picked up on the tone.

“I heard a little thunderclap,” he said, adding that he’d been to the Wailing Wall and promising to go to “early Mass.”

In case viewers couldn’t tell in this half-hour conversation, Giuliani said to Cuomo near the end that the audience “should know that we’re friends” and that the preceding conversation was like “an Italian Thanksgiving dinner.”

At the start of his show and later on, Cuomo touched on the day’s big news: Special counsel Robert Mueller has charged in federal court that former Trump campaign Chairman Paul Manafort has been trying to illegally sway witnesses for his upcoming trial and might soon be jailed.

Perhaps Cuomo’s producers should have pushed the Giuliani interview back and changed the lead of the show to the Manafort story. It was just breaking at the time and was displayed prominently on the web sites of The New York Times and The Washington Post.

It would have been a difficult call on a debut show to disrupt a script like that, but major news often breaks in this hour and good prime-time hosts must learn to stay flexible.

The Rachel Maddow Show did a better job of this on MSNBC in the same hour by using news about Michael Cohen’s legal setbacks to segue into a deeper examination of what Mueller’s team newly alleges against Manafort.

Cohen is Trump’s creepy “lawyer.” Like Manafort, Cohen got busted by the feds, who scooped up piles of evidence. Most has been approved for use by prosecutors, Maddow reported.

Maddow could barely keep the smile off her face.

Maddow also wove into this narrative a bright take on Trump’s threat to pardon himself and all his cronies. Would he dare pardon the Russians who have been indicted? She even read their names in a Russian accent.

Alas, as is often the case with even Maddow’s sharpest segments, her screen was too often littered with incomprehensible displays of typed pages. In addition, Maddow continued her chronic mistake of reading one script while her screen shows a different set of words.

This is the perfect way to bifurcate the attention of the audience and drive even devoted viewers nuts. Won’t someone please ask her to stop?

Late in TRMS, Maddow presented a powerful segment about the Trump administration’s focused cruelty against immigrants as an intimidation tactic.

Trump’s ICE cops are ripping apart families and psychologically scarring children for life. Maddow showed video of Sen. Jeff Merkley of Oregon trying to enter a detention center in Texas and getting rebuffed by uniformed government goons with guns.

Little of these themes filtered through in the same hour with Hannity, who hosted on a newly decorated set of pale blue that included white stars descending slowly in a column from on high and landing on his right shoulder like so many soft snowflakes.

In the past, some Hannity graphics have looked like lightning bolts shooting through his smug, chunky skull. Despite the changes in studio look, Hannity’s producers still surround him in hues of red, white and blue.

Hannity told his viewers Monday nothing of the latest Manafort stink because Hannity had yet to purr his nightly pillow talk to Trump, who whispers back tomorrow’s talking points by phone with his Long Island chum before they go night-night. Certainly Hannity will enlighten America on Tuesday.

Nor did Hannity mention that Trump canceled the White House visit of the Super Bowl champion Philadelphia Eagles because so few of them wanted to come because Trump last season turned “The Star-Spangled Banner” at NFL games into a divisive racial issue.

Usually, Hannity loves to race-bait. Perhaps this dis to Trump was too much to take.

Instead, Hannity’s graphics—more simple than Maddow’s—declared “Journalism Is Dead.” As is the case most nights, Hannity spent much time discussing the Clintons and Barack Obama.

He welcomed hairy-faced Sebastian Gorka, whose accent suggests he just might be an illegal alien. (The same might even go for Trump’s invisible third and current wife. Either way, we need to see the papers of both. Right now. Long forms, please.)

Gorka, however, did break exclusive news on the Mueller probe to You The American People.

Next, Trump flack Sarah Sanders told Hannity it is a “fake witch hunt.” Levin told Hannity that Mueller is an “unconstitutional monster” and “a thug.” Finally, Joe Concha and Ed Henry burbled the usual stuff.

Meanwhile, back over on CNN, Cuomo slogged through the second half of the show with “The Great Debate” between former Michigan Democratic Gov. Jennifer Granholm and former Pennsylvania Republican Sen. Rick Santorum.

These two are old foes from larger CNN panels that sometimes approach double figures and argue like a jury. Perhaps they won’t cut each other off so much if it’s only the two of them, as it was Monday night.

Despite this effort to get fresh at 9 p.m. CNN still has that Crossfire mentality in its DNA, and this is the latest version. Cuomo referred to them by their last names, which was probably better than calling them Punch and Judy.

Finally, in a segment called The Whiteboard, Cuomo drew circles. It looked sort of like a collapsed snowman and might have had something to do with the flakes blowing over from Hannity. 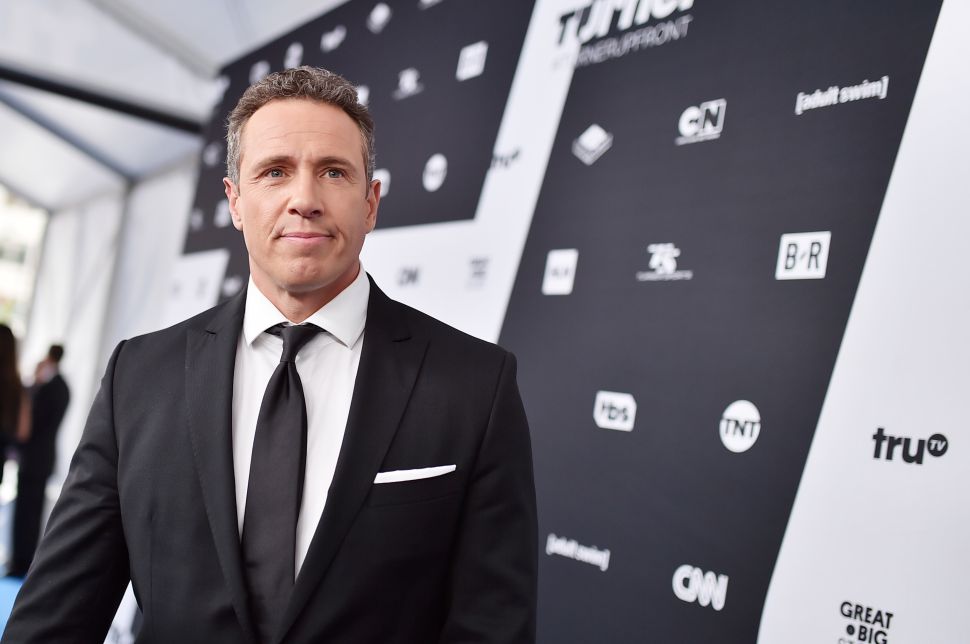